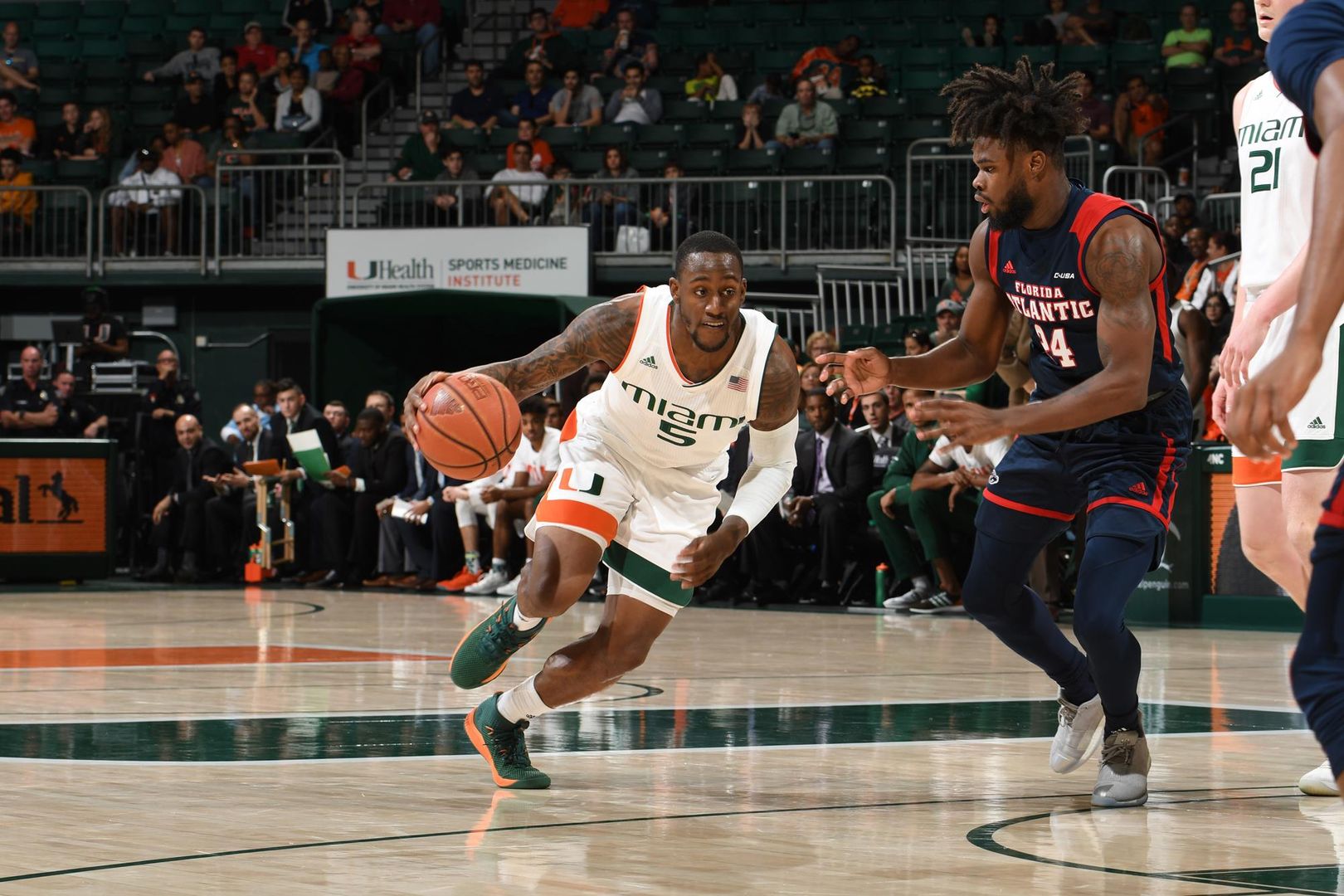 Hurricanes Dominate in 75-55 Win Over FAU

CORAL GABLES, Fla. – Dominating on both sides of the court from start to finish, Miami cruised past Florida Atlantic, 75-55, Saturday afternoon at the Watsco Center.

In similar fashion to Wednesday night’s victory over Houston Baptist, seniors Ebuka Izundu and Anthony Lawrence II led Miami (7-4) to its second straight home victory. Izundu tallied a co-game-high 19 points, while also registering his second consecutive double-double with a game-high 13 boards. He is the first Hurricane to record consecutive double-doubles since Tonye Jekiri on Nov. 20 and 22, 2015.

Stuffing the stat sheet, Lawrence finished the game just shy of a triple double closing out the afternoon with 17 points, eight rebounds and a career-high eight assists.

Miami opened the contest firing on all cylinders, quickly jumping out to a 19-5 lead in the first eight minutes of action. Holding the Owls to shoot just 1-of-7 from beyond the arc and 2-of-10 from the field during the span, Miami dominated from the opening tip off. Coming out of a media timeout, the Canes continued to shoot lights out, closing out the half hitting on 58.8-percent (20-34) of their shots from the field and entering the lockerroom with a commanding 23-point lead, 46-23.

In the opening stanza, Izundu finished a perfect 5-of-5 from the field and 1-of-1 from the charity stripe, notching 11 points. The center also made his presence felt on the defensive end of the court pulling down seven rebounds, swiping away two steals and recording a block. Joining Izundu in double figures during the first half, Lykes tallied 10 points and dished out five assists, while Lawrence registered nine points, dished out three assists and pulled down six rebounds.

Out of the break, Miami continued to extend its lead, holding the Owls without a field goal through the opening 7:02 of second-half action. Miami went on to take its largest lead of the game (32 points) with 10:43 remaining, following a 3-pointer by Lawrence to jump in front, 61-29.

Miami is set to return to action next Saturday, when the Hurricanes welcome Campbell to the Watsco Center at 4 p.m. The game will be broadcast live on the ACC’s Regional Sports Networks.

Game Notes
• Miami is 5-1 at home this season and has won 43 of its last 49 games at the Watsco Center.
• Miami leads the series with FAU, 23-1, including a 15-0 mark at home.
• The Canes did not trail in the game and led by as many as 32 points.
• FAU shot 33 percent from the field, the lowest by a Miami opponent this season.
• Ebuka Izundu scored 19 points and grabbed 13 rebounds for his second straight double-double. It marked his fourth double-double this season and his fifth career.
• Izundu is the first Hurricane player to record back-to-back double-doubles since Tonye Jekiri recorded consecutive double-doubles on Nov. 20 and 22, 2015 against Utah (20p-12r) and Butler (12p-12r), respectively.
• DJ Vasiljevic went 3-for-7 from 3-point range, connecting from long range for the 24th straight game, which is the longest current streak in the ACC.
• It also ranks as the sixth-longest streak of games with a 3-pointer in program history.
• Chris Lykes matched a career high in assists with seven.
• Anthony Lawrence recorded a career-high eight assists, to go along with 17 points and eight rebounds.
• Anthony Mack scored a career-best eight points while playing in 20 minutes, also his most as a Hurricane.
• Zach Johnson scored six points and now has 1,482 career points (1,344 at Florida Gulf Coast, 138 at Miami).
• Junior forward Dewan Hernandez was withheld from competition for the 11th straight game as the University and the NCAA review his eligibility.