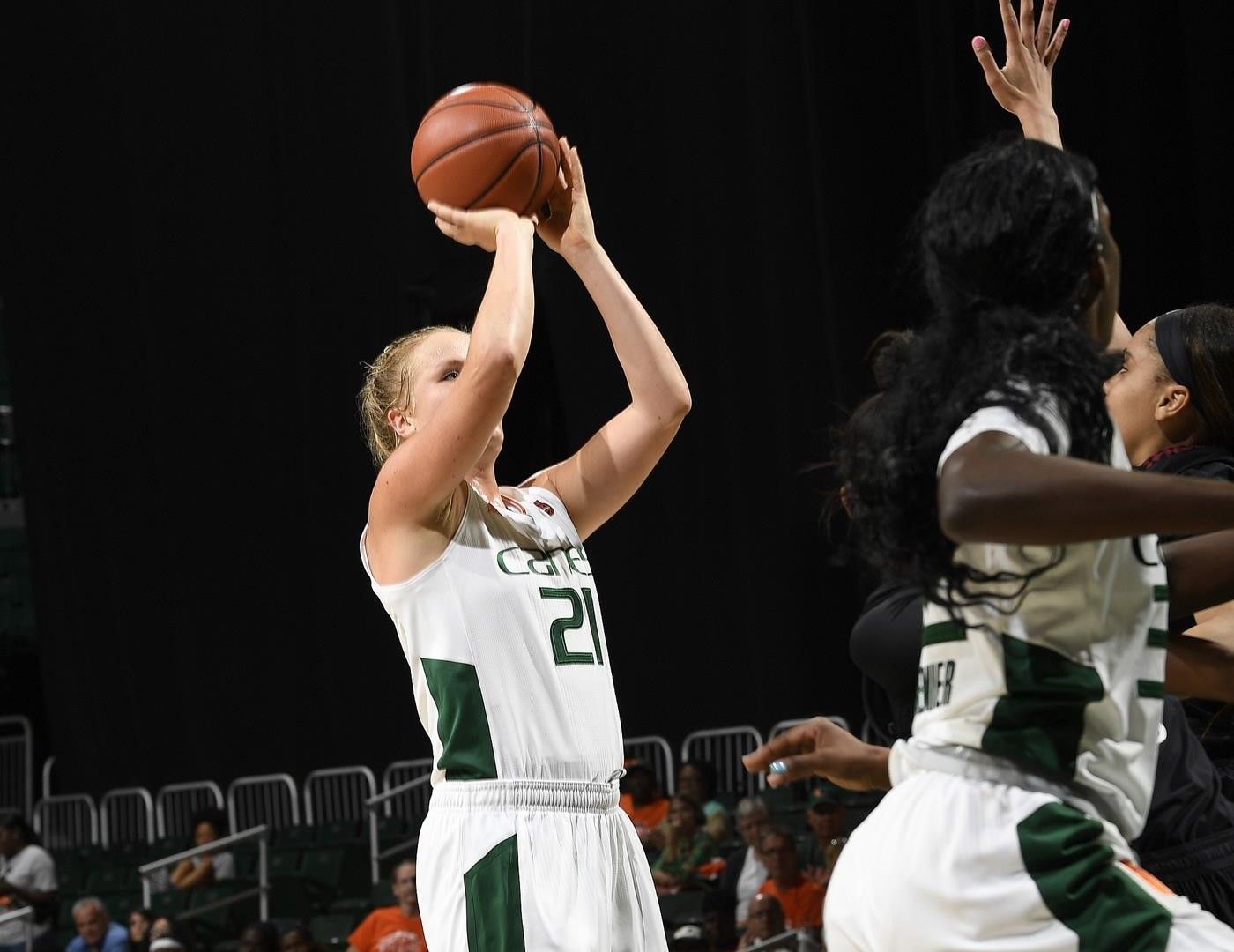 Senior forward/center Emese Hof led No. 24/22 Miami (9-2) on the offensive end, registering 20 points on 9-of-11 shooting to help the Hurricanes stay undefeated at home.

“That’s a scrappy team. It’s not easy to get a rebound against them,” Miami head coach Katie Meier said. “That team plays hard and they play smart and they followed their scout. There were some positives. We just weren’t focused and we’ve been flat.”

The Hurricanes took early control of the contest, scoring 18 of the first 22 points. Hof posted eight points on four shots in the opening period, personally outscoring the Hawks in the frame, as Miami led, 20-7, after 10 minutes.

The Maryland Eastern Shore (2-8) offense picked up in the second quarter and Miami stretched the lead by just one point, to 37-23, at the half. Hof had 16 points on 7-of-8 shooting from the floor at the break.

After the Hawks pulled within 10 during the third session, redshirt junior forward Beatrice Mompremier went on a personal 6-0 run in 54 seconds to create separation the Hurricanes would not rescind. Miami did not allow a field goal for the final 4:45 of the frame and took a 21-point edge, 57-36, into the last period.

Maryland Eastern Shore trimmed its deficit no closer than 13 in the fourth quarter—doing so in the final minute of the game—and Miami logged its eighth win of the season by at least a dozen.

Along with Hof logging the 15th outing in program history with a Hurricane shooting at least 81.8 percent on double-digit shot attempts, Mompremier registered her seventh double-double of the season. The Miami native logged 13 points and a game-high 14 rebounds.

“I thought Sarah [Mortensen] starting really did open up a lot for Emese, as she went from being in the high post, where she’s been a lot of this year, to the low post and really dominating them,” Meier said. “I thought that really helped. Beatrice responded [to not starting] with a double-double, basically in the second half. I’m proud of her.”

Mykea Gray posted 12 points in the victory and fellow sophomore guard Kelsey Marshall tied her career high in assists with four for the second game in a row. Mompremier and freshman forward Jamir Huston each had a season-best three blocks, while the Hawks had zero as a team.

“We did enough to stretch the lead [throughout the game] and then we relaxed again,” Meier said. “I liked when we were focused defensively and then when we lost out assignments some, they’ll burn you. They’re good . . . and they play ACC opponents so we had to earn this one.”

Miami will now head to Winter Park, Fla., for the Florida Sunshine Classic at Rollins College, where it faces Vanderbilt Thursday at 8:30 p.m. and Alabama the following day at 6:15 p.m.

MIAMI HURRICANES POSTGAME NOTES
– Facing Maryland Eastern Shore for the first time since 2004, Miami improved to 3-0 in the schools’ all-time series.
– The Hurricanes varied their starting lineup for the first time this season, as Mortensen, a junior guard/forward, opened the game in place of Mompremier.
– Five Hurricanes have combined for nine 20-point outings across Miami’s 11 games, with Hof the first player to notch three this season.
– Hof has recorded three of the 15 occurrences of a Hurricane shooting 81.8 percent or better on 10-plus attempts in a game and only one other player, Frances Savage, has even done so twice.
– Mompremier moved past 700 points and reached 250 free-throw attempts in her career, sophomore guard Endia Banks surpassed 300 points at Miami and sophomore guard Kelsey Marshall eclipsed 350 points and reached 100 rebounds as a collegian.