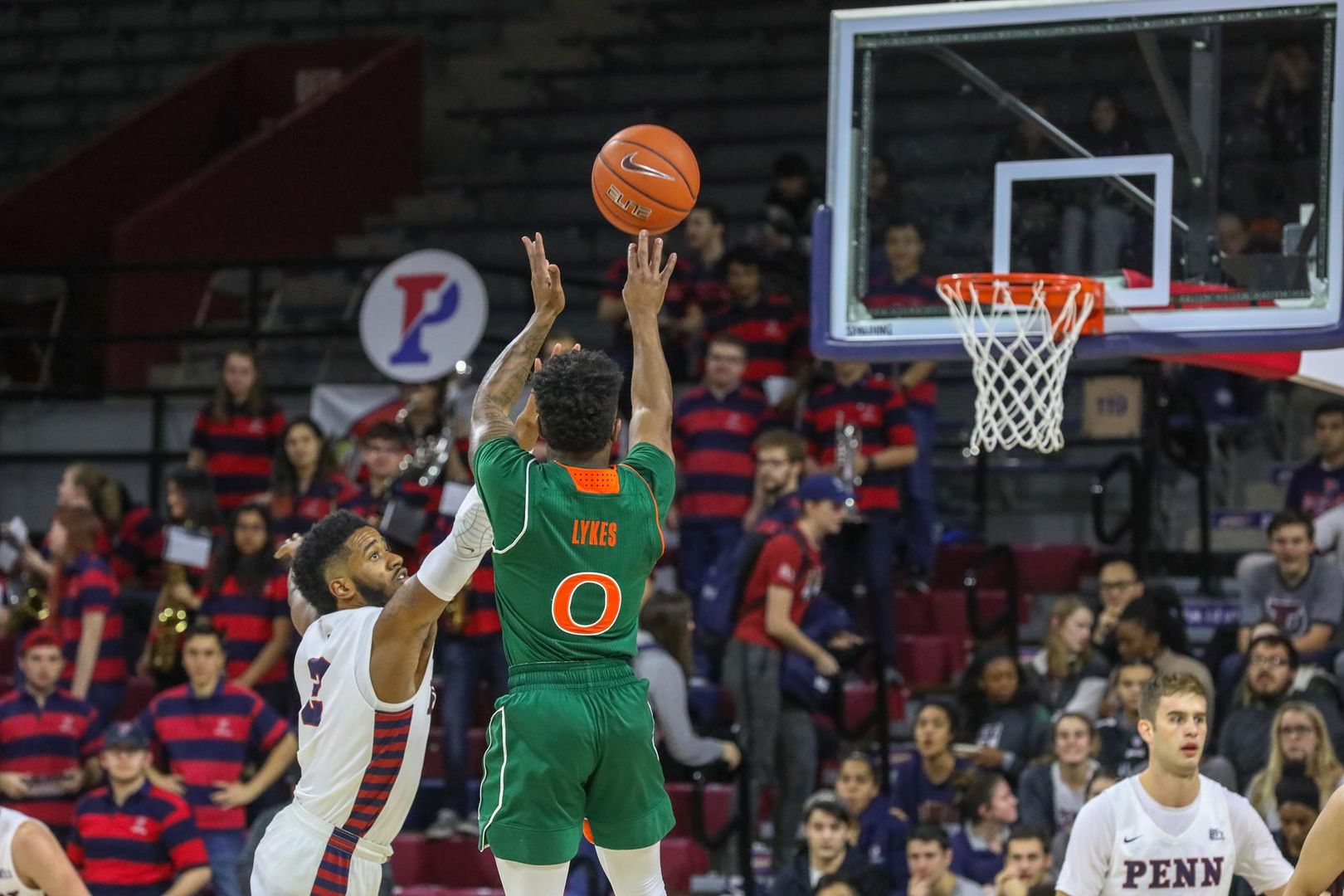 PHILADELPHIA – The University of Miami men’s basketball team’s late comeback heroics came up short Tuesday night at The Palestra, as the Hurricanes dropped their road contest against Penn, 89-75. The Canes (5-4) cut a 19-point deficit to just four with 3:23 remaining but could get no closer.

The Canes played with just seven scholarship student-athletes, as redshirt freshman forward Deng Gak missed the game with a left knee injury. He will be re-evaluated after the team returns to Coral Gables.

Offensively, the Hurricanes opened the game shooting an efficient 14-of-27 from the field and 4-of-8 from beyond the arc. Waardenburg led the way tallying 11 first-half points, shooting a perfect 4-of-4 from the floor. However, the Canes found themselves trailing by 14 at the half, 50-36, after Penn opened the game shooting lights out. The Quakers knocked down 11 3-pointers, tying for the most in a half by a Miami opponent since the Canes joined the ACC prior to the 2004-05 season. Miami also allowed 11 on the road against Wake Forest on Feb. 11, 2015.

Penn continued to enjoy a strong shooting performance throughout the second half, extending its lead to as much as 19.

Trailing 77-60, with 8:01 to play, Lykes started to take over the game with a personal 8-0 run. The sophomore opened up the rally knocking down a pair of free throws, before drilling a mid-range jumper on the ensuing offensive possession. Following another pair of defensive stops, Lykes took advantage of back-to-back fast breaks, collecting two more free-throws and a hard finish at the basket. Overall, the Hurricanes enjoyed a 15-2 run over a 5:27 stretch to cut the deficit to as little as four, 77-73, with 3:23 remaining in the game. However, Penn answered with a 9-0 run to put the game out of reach.

With an upcoming 15 days of rest, the Hurricanes will look to regroup before hosting Houston Baptist on Wednesday, Dec. 19 at 7 p.m. The game will be broadcast live on ACC Network Extra.

• Miami leads the series with Penn, 6-4, and is 21-11 all-time against Ivy League programs.
• Penn hit 13 3-pointers, a season high for a Miami opponent (9 vs. Fresno State). The Quakers hit nine 3-pointers in the first 13:39 of the game.
• Penn finished 13-for-23 (56.5%) from behind the arc. Opponents were shooting 27.9 percent from 3-point range entering the game.
• Miami suffered its fourth straight loss, its longest losing streak since a four-game stretch from Jan. 19-30, 2011. It marked the Canes’ first four-game losing streak during non-conference action since joining a conference for basketball. UM joined the BIG EAST in 1991-92. Prior to joining the BIG EAST, Miami was an independent.
• The Quakers hit 65.5 percent (19-29) of their first-half field-goal attempts, best by a Miami foe since Boston College hit on 65.5 percent of its attempts in the first half on Feb. 24, 2018.
• Miami dropped to 110-18 when scoring 70 or more points in eight seasons under Jim Larrañaga.
• Sam Waardenburg scored a career-high 14 points (12 vs. Wake Forest last season). He also played a career-high 37 minutes.
• Zach Johnson scored 17 points and now has 1,467 career points (1,344 at Florida Gulf Coast, 123 at Miami).
• Deng Gak missed the game with a left knee injury and will be re-evaluated when the team returns to Coral Gables. Miami had seven scholarship players available for the game.
• Junior forward Dewan Hernandez was withheld from competition for the ninth straight game as the University and the NCAA review his eligibility.