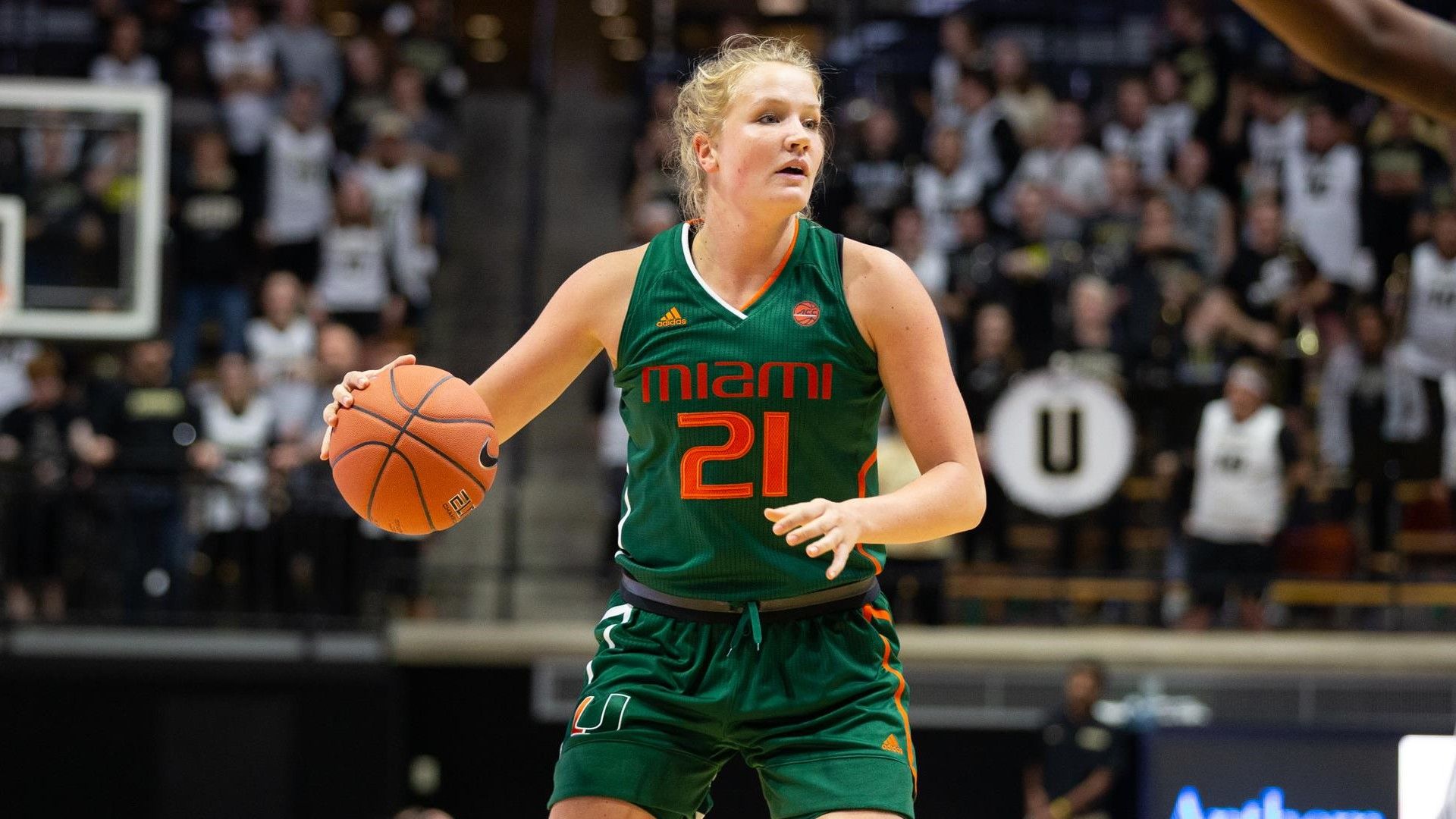 Despite No. 21/20 Miami (6-2) getting season highs in points (25) and rebounds (14) from senior forward/center Emese Hof, the Boilermakers’ 12-of-18 3-point shooting was too much to overcome at Mackey Arena.

“The game came down to details of fouling a jump-shooter, which is a big no-no in basketball, their offensive rebounds . . . [and that in the] last five seconds of their offense, they were very efficient,” Miami head coach Katie Meier said. “Someone on your team is going to have to play really special off the scouting report performance to beat Miami and [Dominique] Oden did it.”

In the first period, Purdue (6-2) connected on five of its first eight 3-pointers, with Oden, a junior guard, making three of her first five attempts and scoring 12 of the Boilermakers’ opening 17 points. Buoyed by a 9-0 run late in the frame, Purdue led by nine, 24-15, through 10 minutes.

Purdue extended its edge to 13 points, 28-15, with 8:23 left before the break, but the Hurricanes quickly answered with an extended 18-7 run to trim the deficit to two, 35-33, with 2:42 left in the half. The span included two 6-0 runs. The Boilermakers, though, made each of their first four 3-pointers in the frame—the lone miss was at the halftime buzzer—and took a 40-35 advantage into the locker room.

The Boilermakers went 9-of-14 from long range in the first half, with Oden posting a 5-of-9 mark and tallying 18 points.

“There was a lot to overcome at halftime and I told them I thought we were in a great spot and we started the third and we got some stops,” Meier said. “We then just . . . looked a little shy to start the third at the rim.”

After a back-and-forth third period, Miami trailed by just three points, 49-46. Hof reached the double-double mark with over a full quarter to go, tallying 19 points and 11 rebounds with one session remaining.

The Hurricanes were unable to pull any closer in the final period, as Purdue continued its blistering shooting from long range and earned the victory.

Along with recording her seventh double-double, including her second this season, Hof set career highs in field goals made (11) and attempted (17), as well as minutes (35). Additionally, she logged three blocked shots to reach 131 in her career, one shy of Chanivia Broussard for fourth place on Miami’s all-time leaderboard.

“I think she was determined,” Meier said of Hof’s performance. “She cares so much about this team, so I don’t think she had any idea how well she was playing. She just knew we were struggling offensively and she wanted to help Miami.”

Oden led all scorers with a career-high 27 points for the Boilermakers. Sophomore guard Karissa McLaughlin played the full 40 minutes and notched 18 points and a career-high seven assists, while junior forward Ae’Rianna Harris added 11.

Purdue’s 12 made 3-pointers were the most by a Miami opponent since No. 13/12 Florida State totaled the same amount on Jan. 11, 2018 in a home victory over the Hurricanes. The Hurricanes finished with a 34-14 edge in points in the paint and a 10-2 advantage in points off turnovers, but the Boilermakers made eight more 3-pointers on just four more attempts.

The Hurricanes open a three-game homestand Sunday at 1 p.m., when they take on Colorado at the Watsco Center.

MIAMI HURRICANES POSTGAME NOTES
– In a series that dates back to 1984, but did not feature a meeting since 1991, the Hurricanes dropped 2-4 all-time against Purdue.
– The ACC won the 2018 edition of the ACC/Big Ten Challenge, taking eight of the 14 matchups to earn its ninth victory in the 12th annual conference showdown.
– Purdue’s nine first-half 3-pointers were the most in a half by a Miami opponent this season, passing the eight made before the break by Stephen F. Austin, and just the second time a Miami foe made greater than six in a half.
– Miami now has seven double-doubles through eight games this season, with at least one in all but two outings.
– Hof surpassed 2,000 minutes played and 350 field goals made as a collegian, Cornelius eclipsed both 500 points and 1,750 minutes played at Miami, Mompremier moved past 1,250 minutes played in her career and Gray surpassed 1,000 minutes played as a Hurricane.