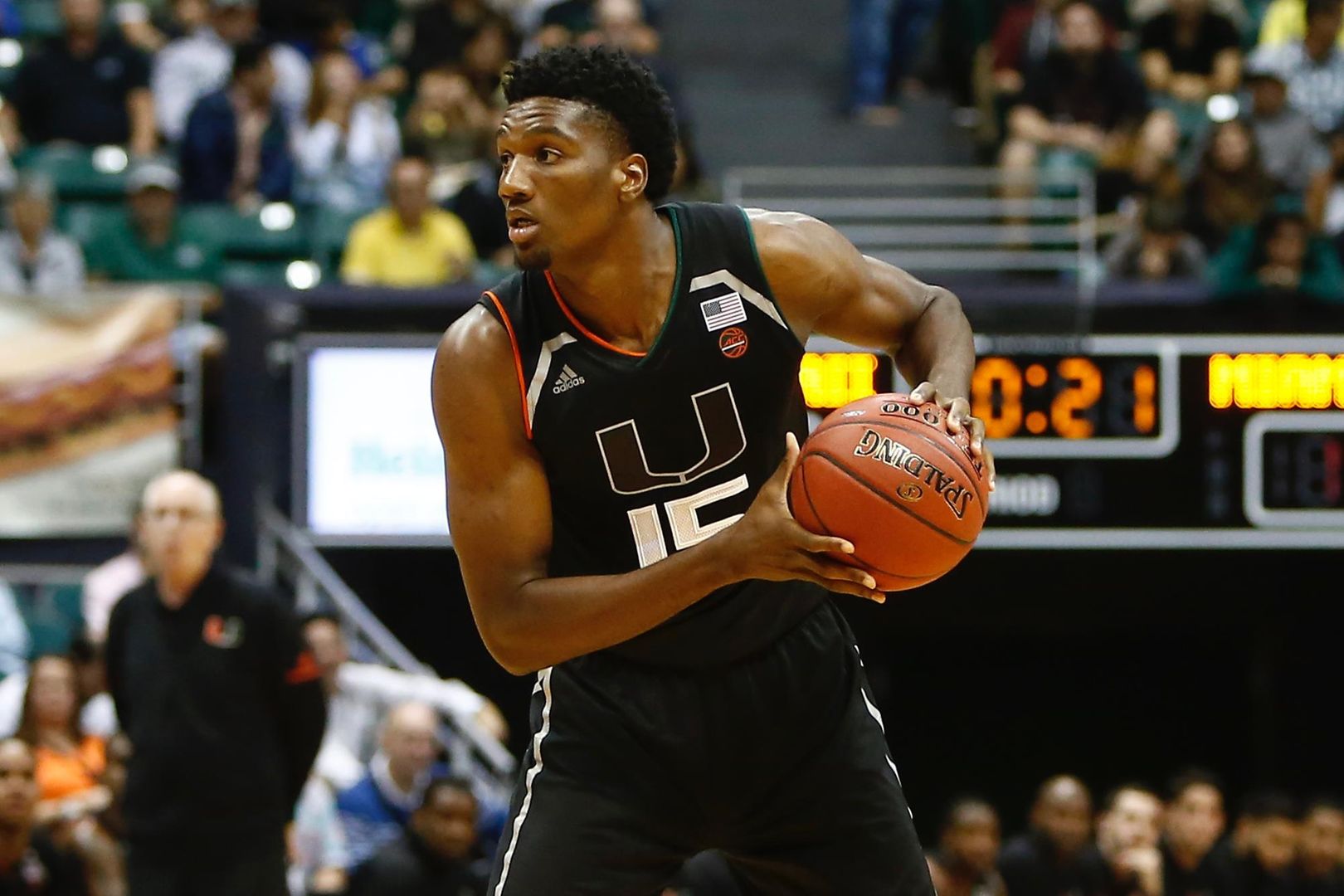 FULLERTON, Calif. – In a battle for the Wooden Legacy championship, the University of Miami men’s basketball team came up short against Seton Hall, 83-81, Sunday night at Titan Gym on the campus of Cal State Fullerton.

Off a turnover by Seton Hall junior guard Myles Powell, the Hurricanes (5-1) inbounded the ball with 16 seconds to play, trailing 82-81. Facing a double team, redshirt senior guard Zach Johnson found Anthony Lawrence II open at the top of the circle, but the senior guard’s potential game-winning 3-pointer rimmed out as Seton Hall (4-2) pulled down a rebound with only 0.9 seconds remaining and held on for the win.

A trio of Canes registered at least 17 points on the night, with Johnson and sophomore guard Chris Lykes each notching 18 points, while Lawrence tallied 17. Following the game, Johnson was named to the Wooden Legacy All-Tournament Team. Seton Hall senior forward Michael Nzie went 8-for-8 from the field and led all scorers with 21 points in a game that featured a dozen ties and 16 lead changes.

Miami matched a season high by shooting 54.5 percent from the field (30-for-55), while Seton Hall shot 52.3 percent (34-for-65). Turnovers proved to be a huge factor for the Hurricanes, as their 16 turnovers led to 19 Seton Hall points. Seton Hall committed 13 turnovers. The Pirates also held a 30-29 rebounding edge.

Both squads began the match firing on all cylinders in the opening half, with Miami shooting 16-of-24 (66.7 percent) from the field, while the Pirates shot 19-of-33 (57.6 percent). The lights out period was the highest mark for the Hurricanes since they shot 72.0 percent (18-of-25) in the second half against Middle Tennessee on Dec. 25, 2017, at the Diamond Head Classic.

Following a frenetic first half, the teams entered the locker room deadlocked at 45-45, with Johnson leading all scorers with 11 points.

Seton Hall opened up its largest lead of the game, seven points at 80-73, with 6:22 remaining before DJ Vasiljevic corralled a defensive rebound and punched the ball out to Lykes, who threw a dime up court to a wide-open Lawrence. The senior guard slammed home the dunk to cut the deficit to five. On the ensuing offensive possession, Lawrence made a move past a Seton Hall defender and finished a reverse-layup as Miami trailed by three, 80-77.

After Seton Hall layup, Lykes made a double move near half court and drilled an open 3-pointer to cut the deficit to two, 82-80, with 3:23 to play. Both teams went cold over the next 2 ½ minutes before the Canes’ Ebuka Izundu nailed 1-of-2 free throws with 41 seconds left.

The Hurricanes will look to get back to their winning ways on Wednesday, as the Hurricanes return to the Watsco Center to host Rutgers (4-1) at 7:15 p.m. in the 20th annual ACC/BIG Ten Challenge. The game will be broadcast live on ESPNU.

Game Notes
• Seton Hall holds a 16-8 edge in the all-time series.
• Miami dropped to 47-3 under Jim Larrañaga when scoring 80 or more points.
• Zach Johnson scored 18 points and finished with 54 for the tournament. He was named to the all-tournament team.
• Johnson now has 1,427 career points (1,344 at Florida Gulf Coast, 83 at Miami).
• DJ Vasiljevic recorded a career-high five assists, topping his previous high of four.
• In his 85th career game, Ebuka Izundu attempted and hit his first career 3-pointer.
• Anthony Lawrence II attempted a career-high 16 field goals.
• Miami matched a season high by shooting 54.5 percent (30-for-55). UM also shot 30-for-55 in the first game of the tournament against La Salle.
• Miami shot 67 percent in the first half, its best shooting performance in a half since hitting on 72 percent of its attempts in the second half against Middle Tennessee on Dec. 25, 2017.
• Miami trailed by seven points with 6:22 left in the second half, marking its largest deficit this season.
• Fourteen of Seton Hall’s first 28 points came off UM turnovers. The Pirates finished with 19 points off UM turnovers. The most points off turnovers for a Miami opponent in a full game this season was nine, set twice previously.
• Miami allowed its most points in a first half this season (45).
• Miami forced 53 turnovers in the tournament (20 against both La Salle and Fresno State).
• Junior forward Dewan Hernandez was withheld from competition for the fifth straight game as the University and the NCAA review his eligibility.