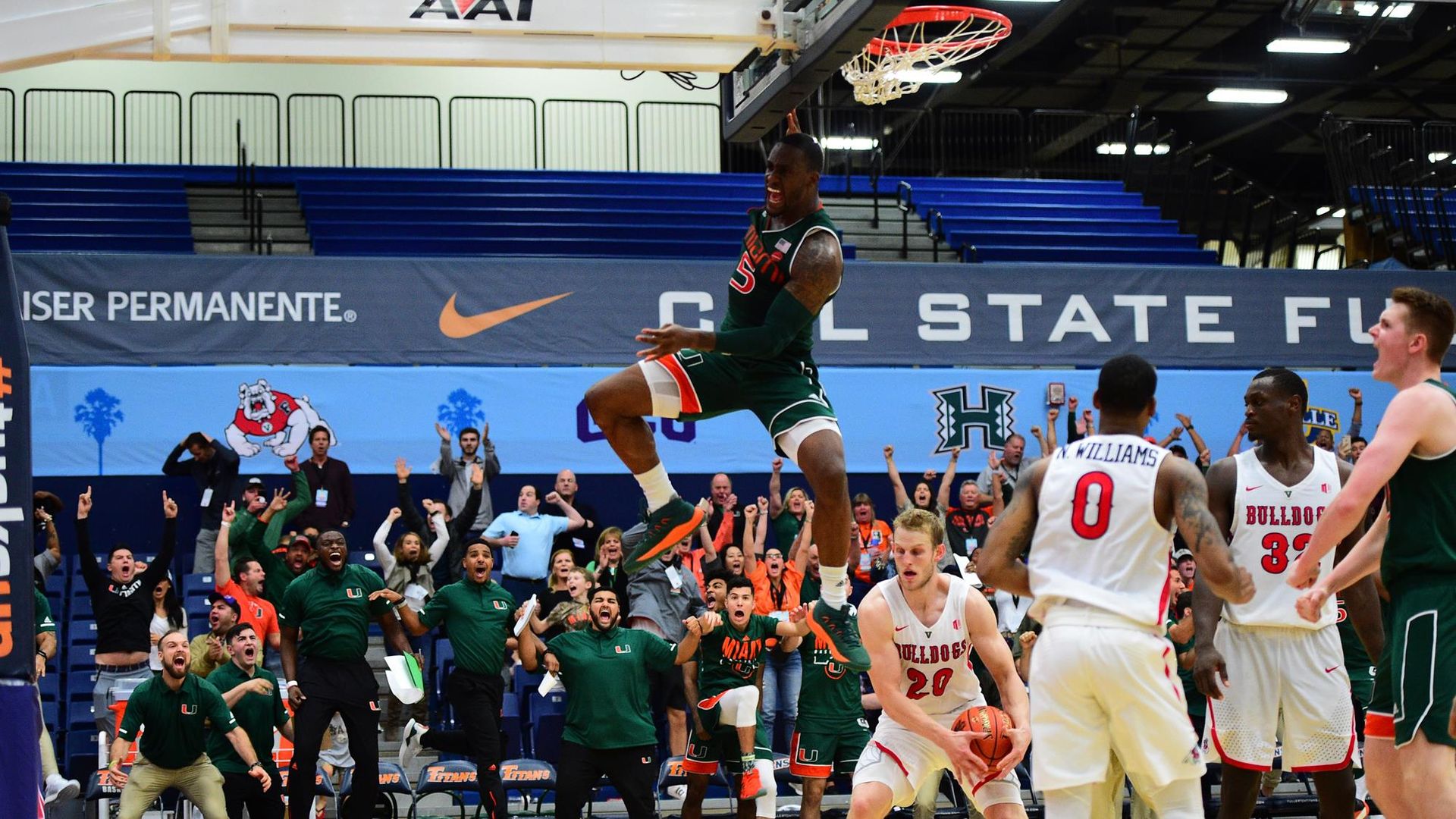 FULLERTON, Calif. – Capping off a back-and-forth game in electrifying fashion, redshirt senior Zach Johnson jammed home a put-back dunk with 0.6 seconds remaining, as the University of Miami men’s basketball team topped Fresno State, 78-76, in the semifinals of the Wooden Legacy Friday at Titan Gym on the campus of Cal State Fullerton.

The Hurricanes (5-0) advanced to Sunday’s title game, scheduled for 10:30 p.m. ET/7:30 p.m. PT against the victor of Friday night’s matchup between Seton Hall and Hawai’i. The game will be broadcast live on ESPN2. Check out the full bracket HERE.

The fourth Hurricane to score at least 20 points this season, Johnson finished the game with a team season-high 24 points, shooting 8-of-16 from the field and 7-of-11 from the charity stripe.

Braxton Huggins (28) and Deshon Taylor (25) combined for 53 of Fresno State’s 76 points. The game featured a dozen ties and 11 lead changes.

After Taylor tied the game with three free throws with 13 seconds remaining in regulation, Miami came back down the floor and Lykes attempted the potential game-winning 3-pointer which bounced off the front of the rim. Making a run from the top of the key, Johnson found space in front of the Bulldog defenders and got his hands above the rim to finish the put-back dunk to secure the 78-76 victory.

Miami survived a hot Fresno State offense in the opening stanza. The Bulldogs hit on 60 percent (15-of-25) of its field-goal attempts in the first half but were limited to 36 percent shooting in the second half to finish at 46.6 percent. Miami shot 43.9 percent (25-57) for the game. Fresno State drilled 9-of-23 from 3-point range, while Miami was 7-for-22. The Canes were strong at the free-throw line, hitting 21-for-28, while FS connected on 13-of-18.

The Hurricanes, led by Johnson’s 15 points through the opening frame, saw themselves trailing at the break, 41-37, as Fresno State closed out the half shooting 60-percent (15-25) from the field, led by guard Braxton Huggins, who closed out the period with 20 of his game-high 28 points. Meanwhile, the Hurricanes were limited to 41.9 percent shooting (13-31) from the field, but saw their bench outscore Fresno State’s 17-2.

Out of the break, Miami came out firing on all cylinders, converting on four of its first five second half field-goal attempts and forcing the Bulldogs to miss each of their first nine shots, to turn a 10-0 run into a 47-41 advantage with 16:43 to play. The Bulldogs were once again able to rally back with a 9-0 run of their own to jump back in front, 50-47.

Following a converted and-one opportunity by Johnson to put the Canes back in front 53-50, Vasiljevic went toe-to-toe with Huggins, as the guards exchanged four consecutive 3-pointers.

Trailing 70-68 with 4:12 remaining, Lykes knocked down a clutch 3-pointer, opening up a personal 5-0 run. On the attempt to push the lead to three, 73-70, Lykes split a pair of Bulldog defenders in transition and buried an easy layup.

Holding a three-point lead, 76-73, Johnson fouled Taylor on a 3-point attempt, and he hit all three attempts to tie the game at 76-76 with 13 seconds remaining, setting up Miami’s late theatrics.