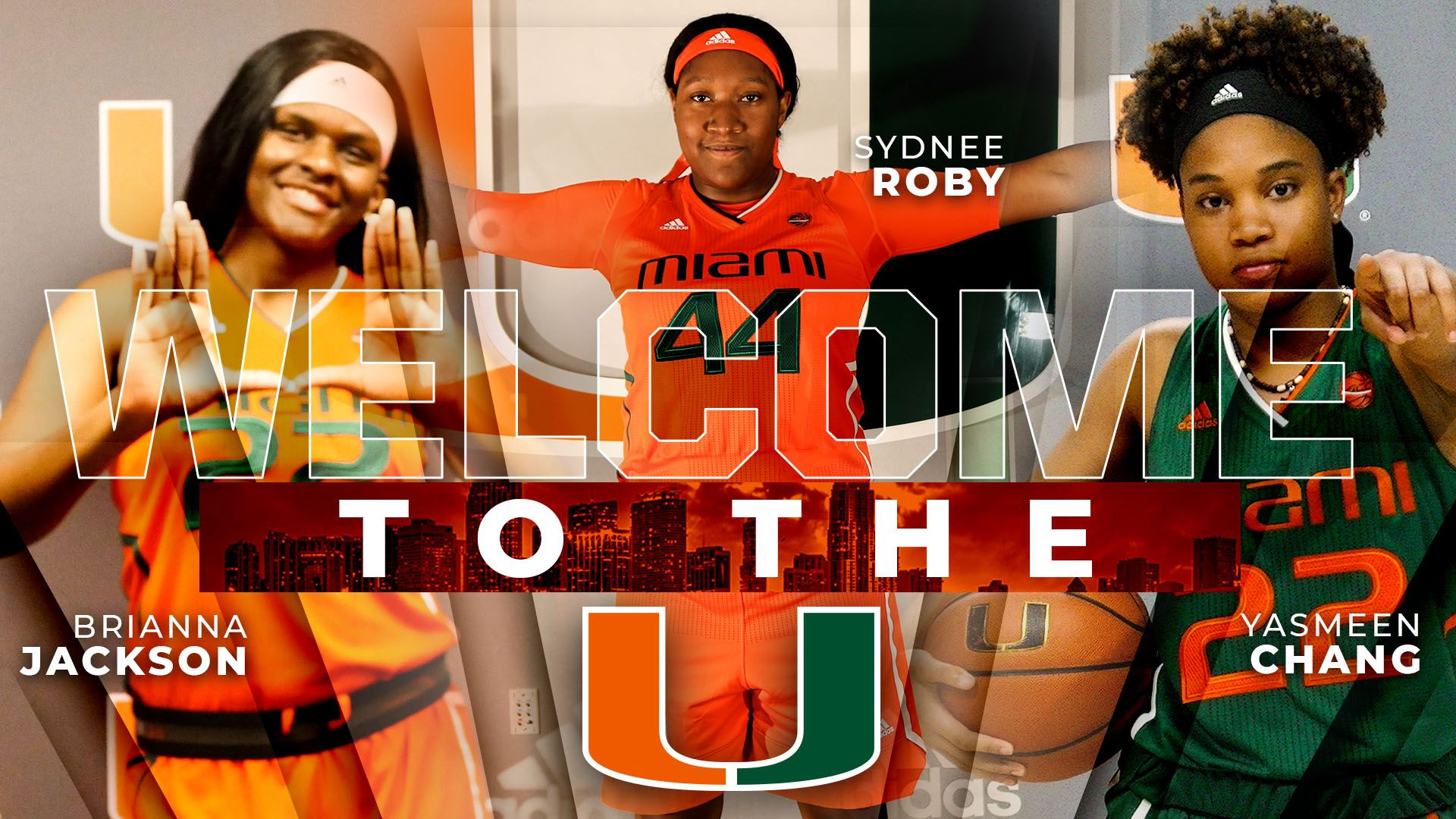 The impressive haul features in-state standout Yasmeen Chang, along with Sydnee Roby and Brianna Jackson. The three are all considered both top-100 prospects and top-five players in their home state by at least one major outlet. Chang peaks at No. 21 nationally, Roby at No. 57 and Jackson at No. 92.

“Our recent successes and up-tempo style of play have attracted a pretty special class for us this signing day,” Meier said. “We look forward to them being able to come in and make immediate impacts on our program, University and community. Compliments to our staff and team for their hard work in recruiting such talented Miami-type players.”

A 5-foot, 9-inch guard from Naples, Fla., Chang is ranked as No. 21 overall in the class of 2019 by ASGR Basketball. ProspectsNation.com considers the Gulf Coast High School standout a four-star player and places her No. 43 in the nation, No. 10 among guards and second in the state.

Chang, a two-time reigning Naples Daily News Player of the Year, averaged 19.5 points, 5.5 rebounds, 2.6 assists and 2.7 steals while helping her team to a 25-3 record, district title and regional final berth as a junior in 2017-18. Chang burst onto the scene as a freshman at Riverdale High School by leading the area in scoring at 27.3 points per game.

“Yasmeen is a quick, dynamic guard who wreaks havoc on the other team’s defense,” Meier said. “She shoots the three and will beat you off the bounce. She is exciting to watch and can really pressure the ball, which will help us continue our up-tempo style.”

ASGR Basketball, ProspectsNation.com and espnW HoopGurlz all consider Roby, a 6-foot, 3-inch center from Milwaukee, a top-65 player nationally. She checks in at No. 57, No. 59 and No. 64, respectively, with the latter two listing her as a four-star prospect, second-best in the state and top-13 among posts.

A two-time Associated Press First Team All-State honoree who attended the USA Basketball U17 tryouts in May, Roby was both the Wisconsin Gatorade State Player of the Year and the unanimous AP State Player of the Year in 2017-18. She finished her junior campaign averaging 17.0 points, 11.0 rebounds and 2.7 blocks per game, while shooting 61.2 percent from the floor and tallying 14 double-doubles.

“Sydnee can hurt you at the high post and the low post. She brings a very versatile skill set on the offensive end,” Meier said. “Her mother played basketball at a high level and this is apparent in Syd’s high basketball IQ. She is also more than willing to put a body on somebody on the defensive end.”

Jackson, a 6-foot, 3-inch forward out of Virginia Beach, Va., and Princess Anne High School, Jackson is considered a four-star prospect by both espnW HoopGurlz and ProspectsNation.com. The former ranks her No. 92 nationally, including No. 17 among posts and fourth in Virginia, while the latter places her No. 101 in the country, No. 19 among forwards and sixth in Virginia.

As a junior in 2017-18, Jackson was USA TODAY First Team All-Virginia, as well as the Class 5 Player of the Year and The Virginian-Pilot‘s All-Tidewater Player of the Year after logging 11.8 points and 10.7 rebounds per game. She had three double-doubles in the state tournament, averaging 19.3 points and 15.7 rebounds, to aid her team to a fifth straight state title and final record of 26-1.

“Bri is a strong forward who can rebound the ball very well. Fierce and powerful, she punishes opponents with her strength and her physicality,” Meier said. “Her scoring numbers are impressive, but her defense and rebounding are truly high-level. She will answer a lot of needs for us, especially on the offensive glass.”

No. 24 Miami resumes its 2018-19 campaign Thursday at 7 p.m. when it hosts No. 19 Marquette at the Watsco Center in the Preseason WNIT semifinals.

On Yasmeen Chang: “She’s a dynamic guard. I think, when you look at the guards that UM has brought in over the past five to eight years, she fits that prototype. She’s athletic, physical [and is going to] be able to play effectively on both sides of the ball in the ACC. She can defend all the perimeter positions and is going to be able to score at all three levels. When you look at the way Miami plays, she is going to fit in perfectly.”

On Sydnee Roby: “I really like Syd. I think Syd was one of the more underrated players in the 2019 class. She’s a great finisher. She has really agile feet and uses her feet well in space. She’s a kid that should be able to make an immediate impact as far as frontline scoring, especially with [the Hurricanes] losing kids that are seniors right now. She could play very early in her career and make quite an impact.”

On Brianna Jackson: “I think Bri is a kid that also fits Miami, as well. She’s a good athlete with a blue-collar game. She’s going to rebound the ball at a high level. I think, offensively, she brings some different things than other posts that are there. She can play alongside them . . . [and she] should be able to hedge and switch ball screens on the perimeter. It will be interesting to see how they use her because she has a lot of athletic upside.”

On Miami’s Recruiting Class: “I think, any time you’re able to bring in a class of three kids that can [not only] play early, but fit your program the way these three kids fit, [it is great]. I think if the typical Miami fan went and sat in any gym with one of those kids on the floor, they would identify them as a Katie Meier type of kid. That is really good because when they get on campus, they fit the program and they will be able to contribute early or right away. [Miami is] bringing in national-level kids that fit the program. That is a good step one and step two to a recruiting class.”