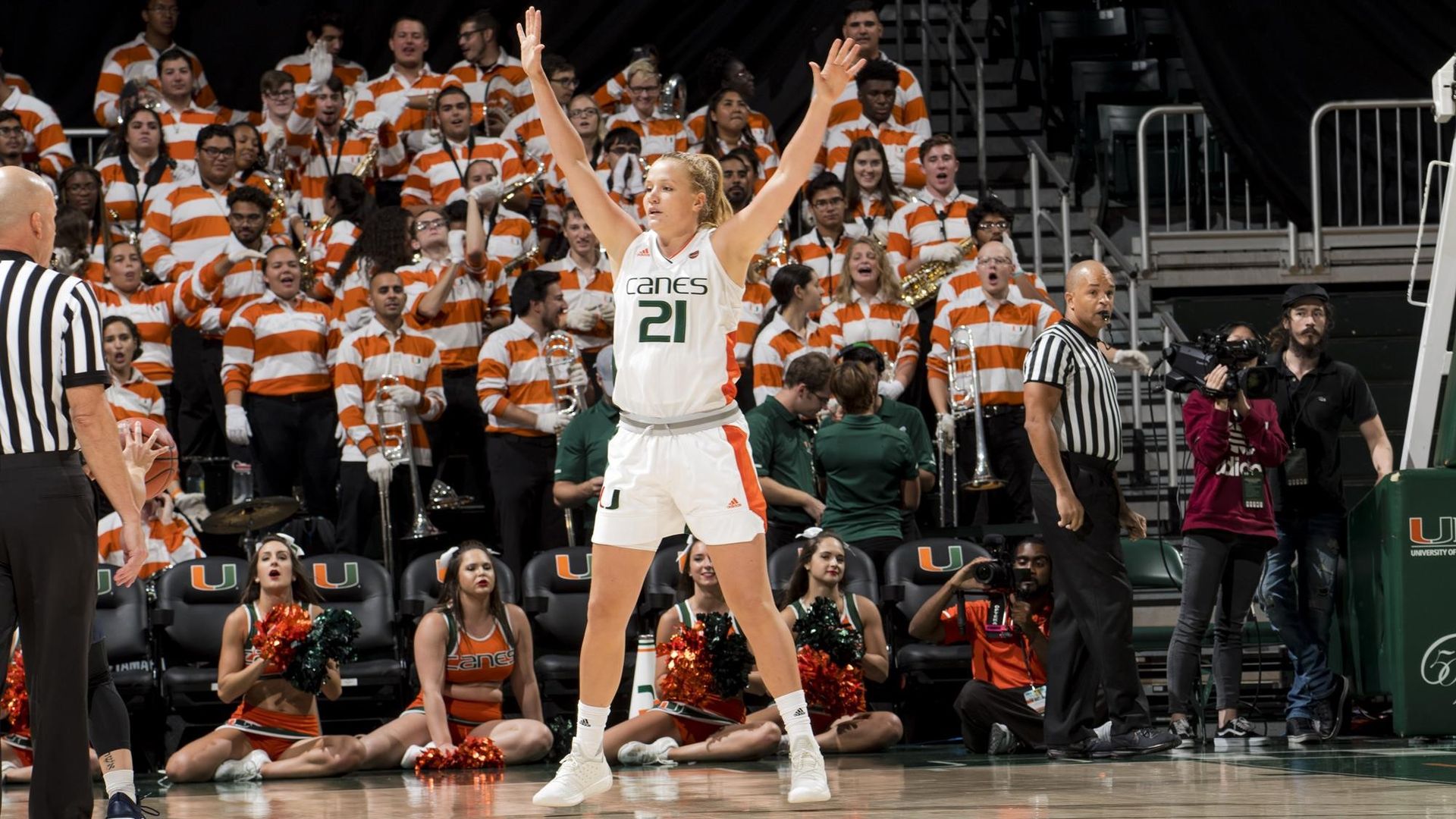 CORAL GABLES, Fla. – The University of Miami women’s basketball team will host No. 19 Marquette in a top-25 matchup Thursday night at the Watsco Center.

No. 24 Miami (3-0) is set to play the Golden Eagles at 7 p.m., with the victor earning a spot in the Preseason WNIT championship game. The full tournament bracket is available HERE, while additional information on the event can be found HERE.

The contest is set to be broadcast on ACC Network Extra HERE, as well as carried live on WVUM 90.5 FM HERE. Live stats for the matchup can be found HERE.

As is the case at all home games, team posters and schedule cards will be available at the marketing table by the main entrance. The first 100 students in attendance will receive free pizza and the first 200 fans will get a shirt.

Marquette is the first of at least two teams on the Hurricanes’ schedule this season they have not previously played.

Miami posted a 75-62 triumph over Hartford Tuesday night at the Watsco Center in the Preseason WNIT quarterfinals. Senior forward/center Emese Hof tied for the sixth-best single-game field goal percentage in program history, finishing 10-of-12 (83.3 percent) from the floor, en route to a 21-point performance.

Marquette is 3-0 on the young season and is averaging 97.7 points per game with a roster that features five 1,000-point scorers. The Golden Eagles’ leading scorer is senior guard Allazia Blockton, the Preseason BIG EAST Player of the Year, at 21.3 points per game.

After finishing 24-10 (15-3 BE), sharing the BIG EAST regular season title and reaching the NCAA Tournament Round of 32 last year, Marquette tied DePaul for the top spot in the conference preseason poll.

The Golden Eagles’ head coach is Carolyn Kieger, who was an assistant at Miami under head coach Katie Meier for six seasons, from 2008-14. She helped the Hurricanes to a 126-68 (.649) record, five postseason berths, four 20-win seasons and three NCAA Tournament appearances during that stretch.

Kieger, who was also Miami’s coordinator of basketball operations in 2006-07, has three additional former Hurricane staff members working for her. Pam Brown (2007-09), Vernette Skeete (2009-12) and MaryLynne Schaefer (2011-14) each spent time alongside Kieger at Miami, with all the latter two overlapping with her in 2011-12. In addition, Brown played for Meier at Charlotte from 2003-06 and her teammate was current Miami coordinator of program & player development Sakellie Daniels.

If Miami defeats Marquette, it will play at Iowa State in the Preseason WNIT title game Sunday at 4:30 p.m. ET. If the Hurricanes fall to the Golden Eagles, their next game would be Nov. 23 at 3 p.m. against Nebraska in the Miami Thanksgiving Classic.