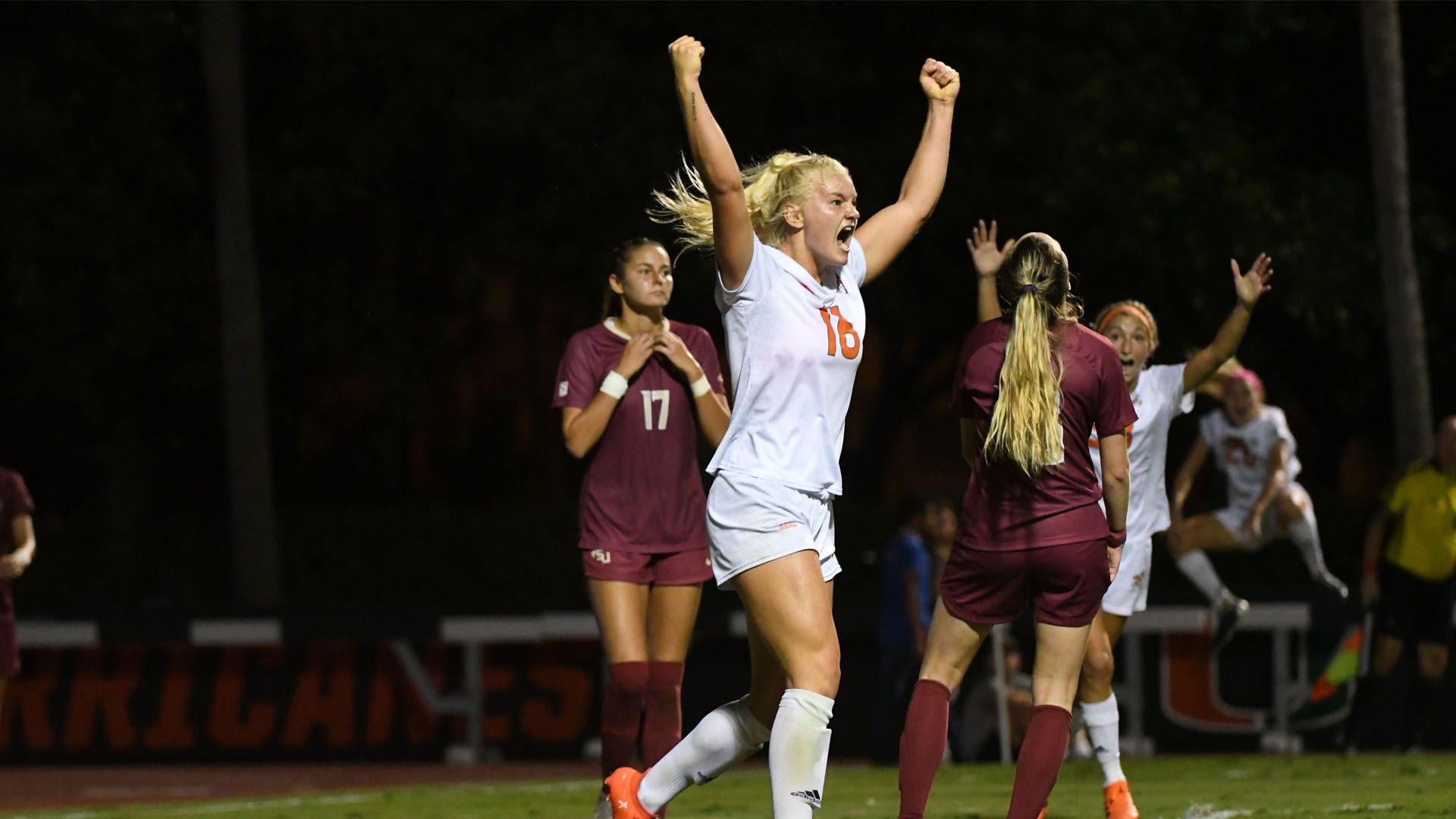 Soccer Topples No. 9 FSU in Overtime

However, it was a freshman, Mallory Olsson, who notched the golden goal and sent the Miami bench streaming on the field in celebration in the 97th minute.

“I thought the team played really well tonight. They are obviously an excellent team and had a lot of chances. We knew they would have the ball a bunch; they have the ball a lot against some of the best teams in the country,” Miami head coach Sarah Barnes said. “So, I thought the team defended well and made it hard for them. And I think as the game wore on we did a pretty good job of starting to execute the counterattack. In the second half and overtime I thought we were starting to get at them and keep it a little bit better.

“I couldn’t be happier for the team and for the seniors to go out on this note. It is a huge accomplishment. Obviously, FSU is always a top team who are competing for a national championship. So, it is a great win for us.”

Looking to not make any mistakes, Miami (6-9-3, 3-6-1 ACC) played sound defense for the first 15 minutes of action, without giving up a shot to the Seminoles.

In the 16th minute, FSU recorded the first shot of the match, for either team, when Gloriana Villalobos sent a ball wide of the net.

Four minutes later, Tullis-Joyce made a key save when a shot was blasted towards the top right corner by Deyna Castellanos. The Shoreham, N.Y., native got a fist on the ball to prevent the goal, while junior defender Bayleigh Chaviers was able to clear the loose ball out of harm’s way.

In the 40th minute, Olivia Bergau of the Seminoles sent a rocket towards the net that ricocheted off of the crossbar and was eventually cleared out of play.

Following the attempt, neither team was able to get a shot off in the final five minutes of the opening stanza as the match remained scoreless.

Out of the break, the Seminoles (12-4-2, 5-4-1 ACC) came out firing, with Villalobos sending a shot wide of the net and Castellanos getting an attempt blocked by a Miami defender in just the first three minutes of the second half.

In the 56th minute, Tullis-Joyce collected her second save of the match off a shot from Castellanos, a finalist for the 2017 Best FIFA Women’s of the Year Award.

After watching a pair of shots miss wide of the net, Tullis-Joyce again had to make a big play for the Hurricanes, in the 70th minute, when she prevented a Dallas Dorosy header from finding the back of the net.

Making sure to not end her collegiate career with a loss, Tullis-Joyce came up with a massive save with only 10 seconds remaining in the match. Coming off of a cross, Dorosy found herself in front of the net sending a header towards the bottom right corner. However, the quick reactions of the redshirt-senior allowed Tullis-Joyce to get a hand on the ball and send the match into overtime.

“I see her head, I see the ball going away from me. So I just knew I had to move my feet and get to it,” Tullis-Joyce said on the save.

In the 95th minute, Tullis-Joyce registered her career-high-breaking 85th save of the season when she jumped on a ball sent on net by Malia Berkely.

Moments later, the Hurricanes found themselves on the counterattack with several bodies in space. Dropped off at the foot of junior Kristina Fisher, the midfielder sent a through ball towards Chaviers, who was streaking down the right sideline. The Stephenville, Texas, native then sent a perfectly placed ball towards the head of Olsson, who was able to head the ball into the back of the net for the golden goal.

The goal marked the fourth of Olsson’s freshman campaign, while the assist was the third of the season for Chaviers and second for Fisher.

With seven saves in the match, Tullis-Joyce closed out her illustrious Miami career with 259 saves, ranking third all-time at UM. The shutout also marked the 14th for Tullis-Joyce, who finished in a tie for second place with Lauren McAdam.

“I am a completely different person and player then from when I first stepped on this field,” Tullis-Joyce said. “Even just with this new coaching staff, [assistant coach and goalkeeper coach] Alan [Fread], coach Barnes and [assistant coach] Jeremy [Williams], they have all helped me grow as a player just in the short span they have been here. I started off as a twig, and now I can actually move my feet and get to a ball. So, it is great.”

The victory over the ninth-ranked Seminoles marks the 12th time in program history the Canes have defeated a top-10 team. It is the first such time since the Hurricanes knocked off second-ranked Virginia, 2-1, on Sept. 22, 2016.

Playing in front of a crowd of 1,850 spectators, it marked the second-highest attendance in program history, trailing only an Aug. 21, 2009 matchup against eighth-ranked Florida.