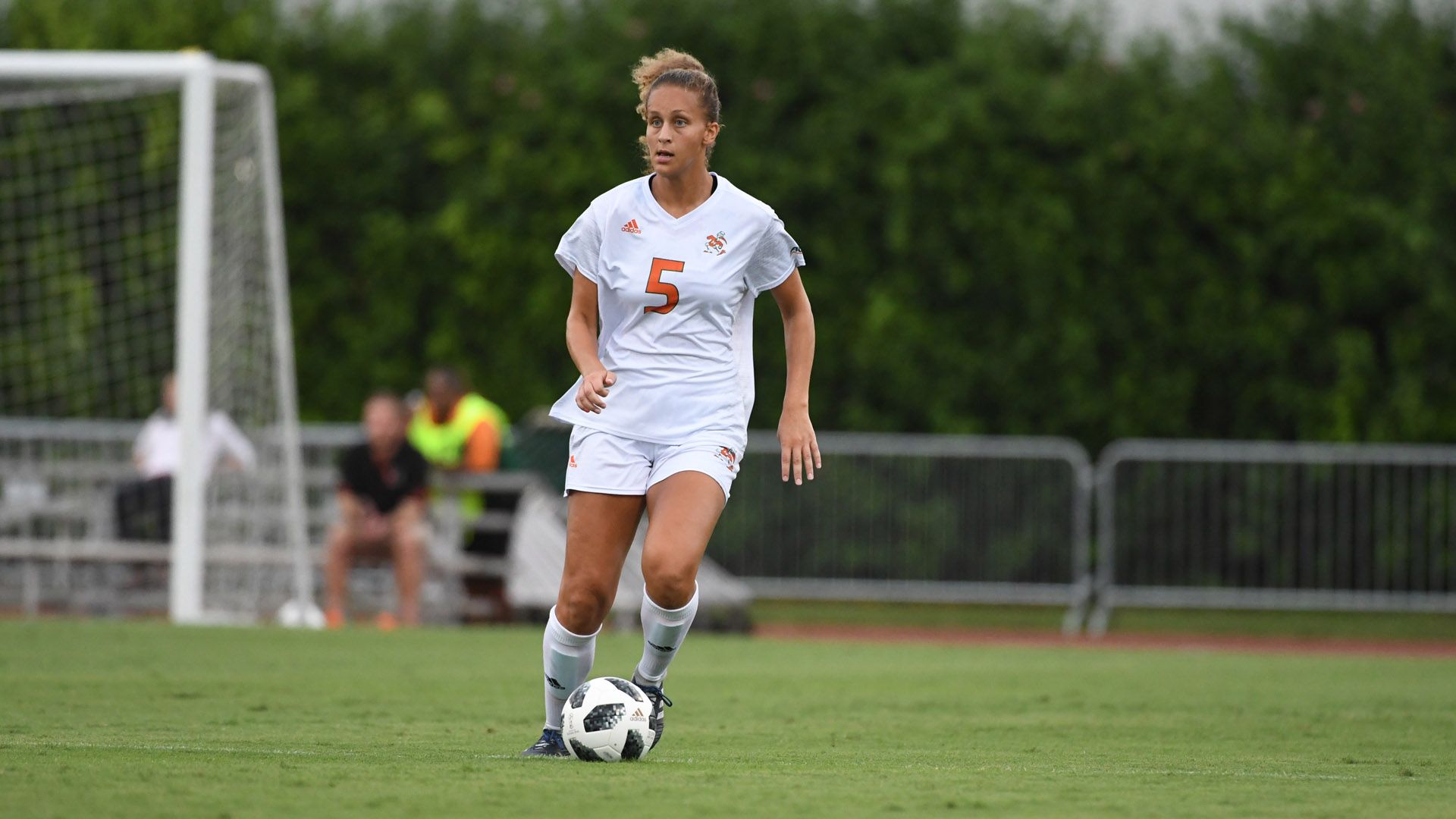 “We are obviously disappointed in the result tonight. Giving up an own goal so early, was really devastating for us. I thought we had moments of really great soccer and created some great opportunities to really put ourselves in a great position to score more than one goal tonight–but we were not able to execute,” said head coach Sarah Barnes. “I thought in the second half there was a chunk of time where [NC State] were really attacking us, but we fought hard and really climbed our way back into the game and put ourselves in a great position. But it is hard to give up goals so easily and then fight back from them. So at the end of the day I think there were some really great moments tonight, but unfortunately, it is just falling short in a couple small details that obviously made a big difference in the game.”

In the second minute, NC State’s Kia Rankin found space in Miami’s box before sending a shot on goal. After deflecting off of a Hurricane’s shin, the ball inched towards the post and reached the back of the net to give NC State the early lead.

In the eighth minute, senior defender Maisie Baker made one of several key defensive stops for the Canes by blocking Michaella Van Maanen’s shot, before clearing the ball up field.

A minute later, junior midfielder Kristina Fisher received a ball in space from sophomore forward Michelle Giamportone. Going one-on-one with a defender, the Jupiter, Fla., native made a couple shifty moves before sending a line-drive towards the bottom right corner. However, NC State’s Sydney Wooten was able to make the diving save.

After a shot by Giamportone missed just wide of the net in the 15th minute, Gudrun Haralz received an opportunity in the 21st minute.  The freshman forward blasted a shot towards the top right corner, but Wootten was able to punch the ball out of play.

In the 35th minute, a shot by Tziarra King was bending towards the back of the net, however redshirt senior goalkeeper Phallon Tullis-Joyce was up for the challenge by making the incredible diving save.

Making a run towards the box, junior defender Bayleigh Chaviers looked to even the match in the 38th minute, but her shot was denied by Wootten.

Looking to apply the pressure immediately after the break, Miami (5-8-3, 2-5-1 ACC) maintained possession on NC State’s (10-4-3, 3-3-2 ACC) side of the pitch for seven consecutive minutes but were unable to get off a quality shot attempt.

As momentum started to swing back in the favor of the Wolfpack, the Hurricanes defense maintained a bend-but-do-not-break mentality, beginning with an incredible diving save by Tullis-Joyce, off a shot by King, in the 55th minute.

Moments later, Anna Toohey took a shot off of the rebound, however junior defender Lexi Castellano was able to clear the ball out of harm’s way.

In the 62nd minute, Baker got in the way of another Wolfpack shot, this time blocking one off of the foot of Paige Griffiths.

Two minutes later, Ricarda Walkling sent a laser towards goal, but was denied by the post. Receiving the deflection with only the keeper to beat, Anna Toohey sent another NC State blast on goal.

Pushing herself off of the ground, Tullis-Joyce quickly reestablished her feet and dove in the direction of the shot, resulting in the redshirt senior’s third save of the night.

Off another defensive stop, Fisher counter-attacked by blowing past Wolfpack defenders. Reaching the top of the box, the junior finessed a shot towards the back post, however Wootten was able to make another key save for NC State.

With 10 minutes remaining in regulation, Fisher set up for a UM corner kick.

With her back turned towards the net, the freshman made a move and attempted a shot but was denied by the Wolfpack defender.

In the 81st minute, Chaviers sent a perfectly placed ball towards the foot of Fisher who blasted a volley towards the upper-ninety. Leaping off of her line, Wootten punched the ball out of harm’s way.

In the 85th minute, Fisher and Giamportone perfectly executed the give-and-go, with the sophomore taking a shot from the top of the 18 that was deflected out of play for a corner.

In the 86th minute, Sorkenn attempted the Canes 14th shot of the afternoon and eighth on target, however the redshirt freshman’s attempt was unable to sneak past Wootten.

Overall, the Canes out shot the Wolfpack, 14-9, while hitting the target eight times compared to NC State’s four.

Miami will look to bounce-back on Sunday at 1 p.m., when it faces third-ranked North Carolina at Wakemed Soccer Park in Cary, N.C.