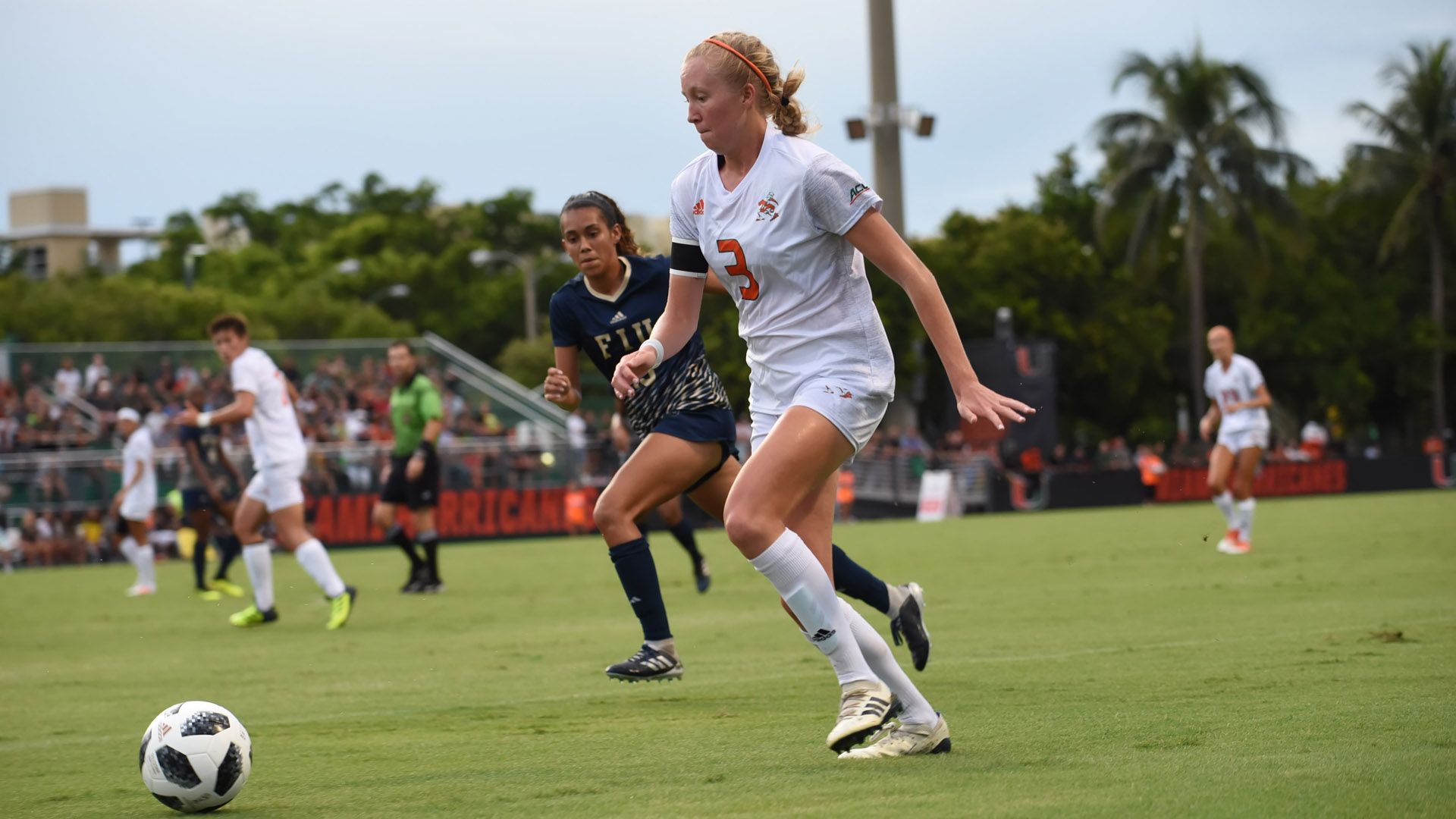 DELAND, Fla. – In the final match before the start of ACC competition, the University of Miami soccer team picked up a draw against Stetson, 1-1, Sunday afternoon at the Athletic Training Center.

It only took 56 seconds for UM to register its first shot on goal, when redshirt freshman forward Rachel Sorkenn, who made her first career start, found open space and directed a shot towards the bottom left corner. But Stetson goalkeeper Emily Plotz was up for the challenge, preventing the goal.

Just 13 seconds later, freshman forward Gudrun Haralz directed a header towards the net, but the shot just missed high, deflecting off of the crossbar.

In the fifth minute, Haralz sent a low cross to junior midfielder Kristina Fisher, who sent a shot on net, but again Plotz was there to make the save.

Moments later, Fisher received another goal-scoring opportunity but her shot just missed wide of the net.

In the 26th minute, redshirt-senior Phallon Tullis-Joyce saw her first action of the contest, calmly catching a Stetson shot taken by Jordan Ross.

Three minutes later, junior defender Bayleigh Chaviers sent a beautiful cross towards the head of Haralz, but the shot just scraped past the left post and out of play.

In the last five minutes of the opening half, UM continued to step on the gas pedal, with sophomore forward Michelle Giamportone sending a rocket towards the net. Originally mishandling the save, Plotz jumped on the ball to prevent any second-chance opportunities.

At the half, Miami found itself tied with its opponent, 0-0, for the third consecutive match.

Miami’s first shot on goal of the second half came off the foot of Sorkenn in the 52nd minute, but Plotz was able to make the play.

In the 63rd minute, senior midfielder Jamie Brunworth set up a corner kick from the left side of the field. The right-footer curved a cross that bent towards the far post. Plotz made an attempt to punch the ball out of harm’s way, but was unable to do so as the ball found its way into the back of the net.

The goal marked the second of the season and the fifth of Brunworth’s career, as Miami jumped ahead, 1-0.

In the 79th minute, Stetson’s Lindsey Parent sent a cross towards the foot of Emily Lamas who drilled a shot into the back of the net, tying the match, 1-1.

In the final seconds of regulation, Fisher sent a shot from 25-yards out, but was unable to sneak the ball past Plotz.

In the first overtime period, Fisher tallied the only shots for either team, but her first attempt was blocked by a Stetson defender and the second missed wide of the goal.

In the fourth minute of the final stanza and 105th overall, Stetson’s Kate Carter sent a shot on net, but Tullis-Joyce made her fourth save of the contest to keep the match all squared at one.

In the 108th minute, Lamas found herself one-on-one with Tullis-Joyce, but the redshirt senior made another tremendous save, her fifth of the contest.

The Hurricanes will begin ACC action Friday at 5 p.m. when they battle Clemson at Historic Riggs Field in Clemson, S.C.