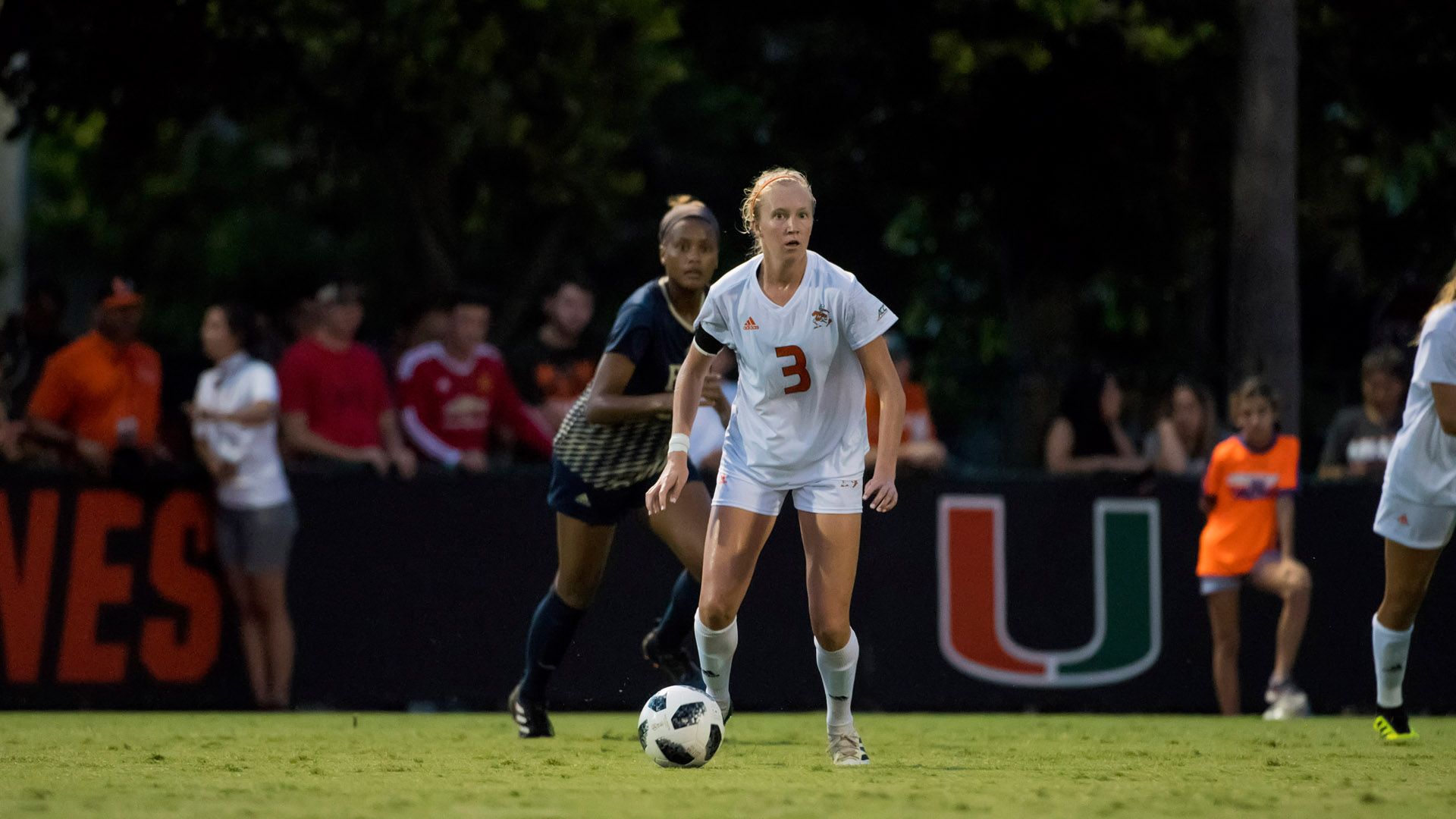 JACKSONVILLE, Fla. – Trailing by a goal with fewer than two minutes remaining in regulation, senior captain Jamie Brunworth walked up to the penalty kick line with ice in her veins. Off of the kick, the midfielder directed a shot towards the back left corner to tie the match, 1-1.

Overall, the Hurricanes (3-3-1) outshot the Jacksonville, 23-11, but both teams registered six shots on goal and the match ended 1-1 once the final overtime whistle blew.

In the sixth minute of action, freshman forward Gudrun Haralz sliced a shot from the top of the 18, but Jacksonville’s goalkeeper Brittany Hundley made the diving save to prevent the goal.

Over the next 32 minutes, Miami controlled possession but was unable to get a shot on target until Brunworth tested Hundley with a shot directed towards the bottom right corner. Again the Dolphins’ senior was there to make the stop.

At the half, Miami and Jacksonville found themselves at a stalemate.

In the 46th minute, Miami began to pour on the heat with junior midfielder Kristina Fisher sending a long ball towards Haralz. Making a run towards the right corner of the 18, the freshman was dragged down to set up a free kick opportunity.

Off of the free kick, Fisher connected with redshirt freshman forward Rachel Sorkenn, but the header was blocked by a JU defender.

Following a foul in the 53rd minute, Jacksonville (0-6-1) found itself with a free kick opportunity from 35 yards out. From the set piece, Zoe Zinis sent a cross towards the head of Kylie McCue who was able to place it in the bck of the net and put the Dolphins in front, 1-0.

In the 64th minute, junior defender Bayleigh Chaviers turned on the jets while making a run down the right sideline and sent a cross towards Haralz, but the freshman’s header misses just wide of the net.

Four minutes later, Haralz again found herself with a goal-scoring opportunity at the top of the 18, but her shot missed wide left.

Off a free kick in the 74th minute, Fisher sent a beautiful shot towards the bottom left corner, but again Hundley was there to make a save.

Thirteen minutes later, Chaviers blasted a shot towards the left of the goal, but the junior’s attempt clanged off the post. Two minutes later, in the 89th minute, the native of Stephenville, Texas, again found space. This time, Chaviers was dragged down by a Jacksonville defender in the box, setting up the penalty kick opportunity for Brunworth.

The senior captain drilled the ball into the bottom right corner, as UM tied the match, 1-1. The goal marked the first of the season for Brunworth and the fourth of her career.

In the seventh minute of the final stanza and the 107th overall, Fisher sent a through-ball to Mallory Olsson. Finding herself one-on-one with Hundley, the freshman forward blasted a shot towards the bottom left corner, but the ball deflected off of the post to the awaiting foot of Jacksonville native Ariana Munoz. The freshman took a shot towards the net, but the ball curved out of play.

The Hurricanes will close out non-conference action Sunday at 1 p.m. when they battle Stetson at the Athletic Training Center in Deland, Fla.