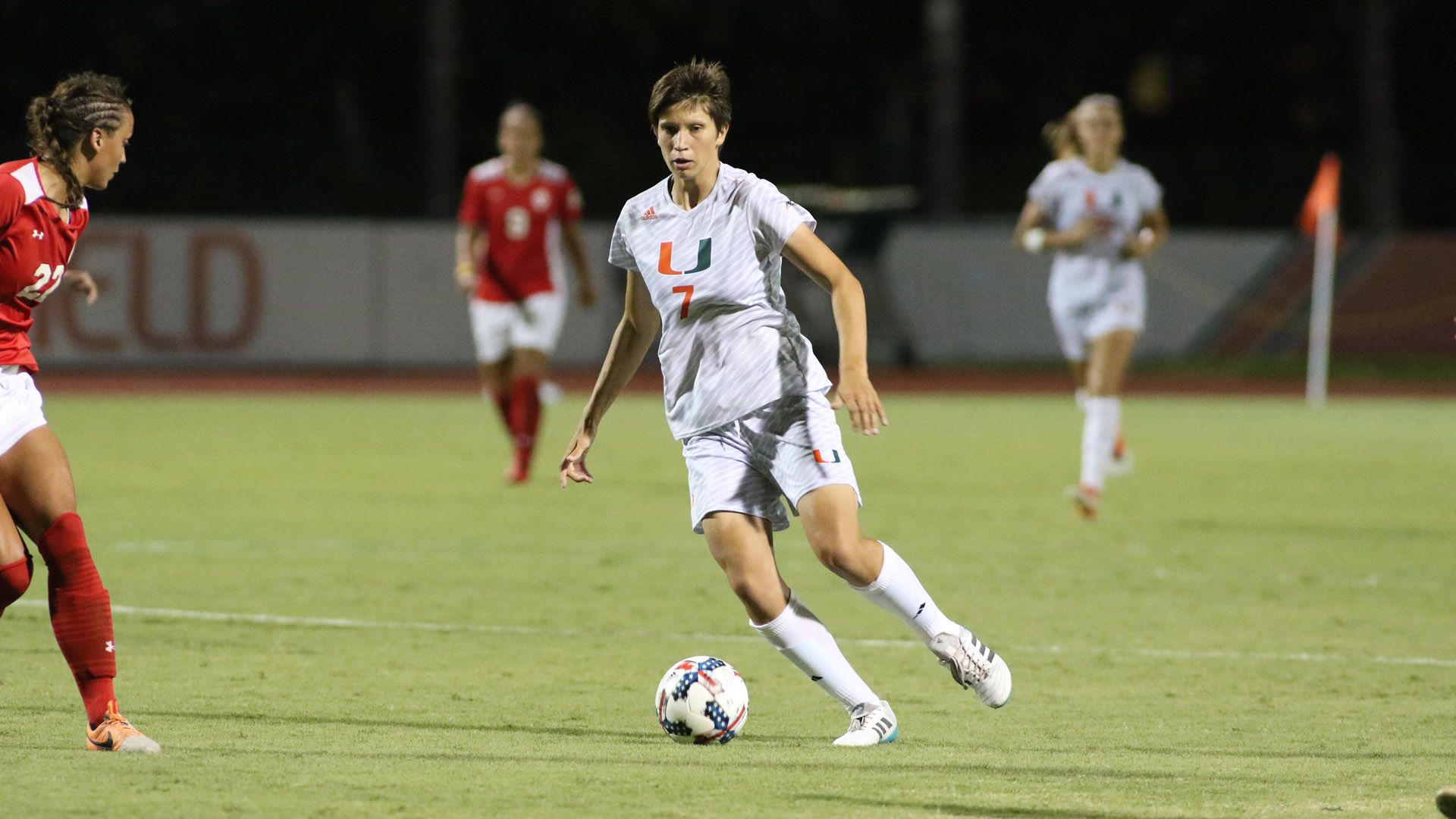 Finding themselves trailing in the opening minutes of the game, Miami (1-0-0) was able to bury two first half goals to pull away from the Owls.

“I thought we were a little shaky, but I am really impressed with our resiliency,” Barnes said. “Giving up a goal in the first 90 seconds is not the way you want to start your season and I think that is a very good FAU team. So we knew it was going to be a tough night and conceding so quickly was concerning. But I thought they responded well and I think right now we have some bad habits that exposed us defensively, and we have got to make some corrections. But I think there are a lot of pieces that we are excited about and we have just got to keep tackling one thing at a time.”

Just 94-seconds into the 2018 season, the Hurricanes found their backs against a wall when FAU’s junior midfielder Mary O’Hara ended up on a breakaway, resulting in a 1-0 Owl lead.

In the 13th minute, freshman forward Gudrun Haralz received the ball at her feet off a deflection and found herself staring at an open net. The native of Iceland, remained composed under pressure finishing the ball into the bottom right corner.

With the match still tied 1-1 in the 27th minute, junior defender Dejah Cason stepped in front of an FAU cross and quickly cleared the ball out of harm’s way, denying a goal-opportunity.

Four minutes later, Haralz again instituted herself on the scoresheet, this time connecting with Giamportone at the 25-yard line. The sophomore pushed the ball in front of her body and drilled a shot towards the upper left corner, while catching the back of the net, to give the Hurricanes a lead they would not look back on.

Both teams closed out the second half strong defensively, allowing zero combined shots, as the Canes entered the locker room maintaining a 2-1 lead.

The opening third of the second half remained the same, with neither team trying to make a mistake.

In the 60th minute, the Hurricanes finally found open space as Giamportone once again received the ball at her feet, this time near midfield. As Haralz began to break down the right sideline, Giamportone hit her in stride and made a run towards the top of the 18. The duo perfected the give-and-go as the sophomore volleyed Haralz cross off of the left post and into the back of the net.

“Obviously it was just awesome. Michelle has an unbelievable strike from distance and came into this season playing really well. And it was a really tough decision tonight as to whether or not we were going to start her, but we told her ‘you are going to play a lot.’ And she came in and told us we were wrong not to start her, didn’t she?” Barnes laughed. “I mean, she was great; her intensity was awesome, her confidence was great, her decision making was very good. I thought in comparison to preseason striking opportunities, tonight’s decisions were significantly better. It is awesome to see a kid grow over just two weeks.”

Moments later, FAU’s junior forward Tiril Haga received an over the shoulder pass to her left foot from O’Hara and finished the ball off of the right-post to pull the Owl’s within one.

Following the burst of goals by both teams in the 60th and 62nd minute, the Hurricanes began to control possession and closed out the final 30 minutes holding a strong back line, to secure the 3-2 victory.

Miami finished the match with a 5-2 edge in shots on goal, and committed only six fouls, compared to FAU’s eight.

After finding the back of the net only once during her freshman campaign, Giamportone collected her first-career multi-goal match and tallied her second-career game-winning goal.

In addition to Haralz, sophomore Alexa Ferriera and freshmen Selena Fortich and Mallory Olsson made their first-career starts as Hurricanes, while sophomore Tia Dupont made her second career start.

Up next for the Hurricanes is a home match Sunday at 6:30 p.m., against FIU. A barbecue will be made available for the first 250 fans to arrive to the field and Vuvuzelas will be distributed to the first 300 students.