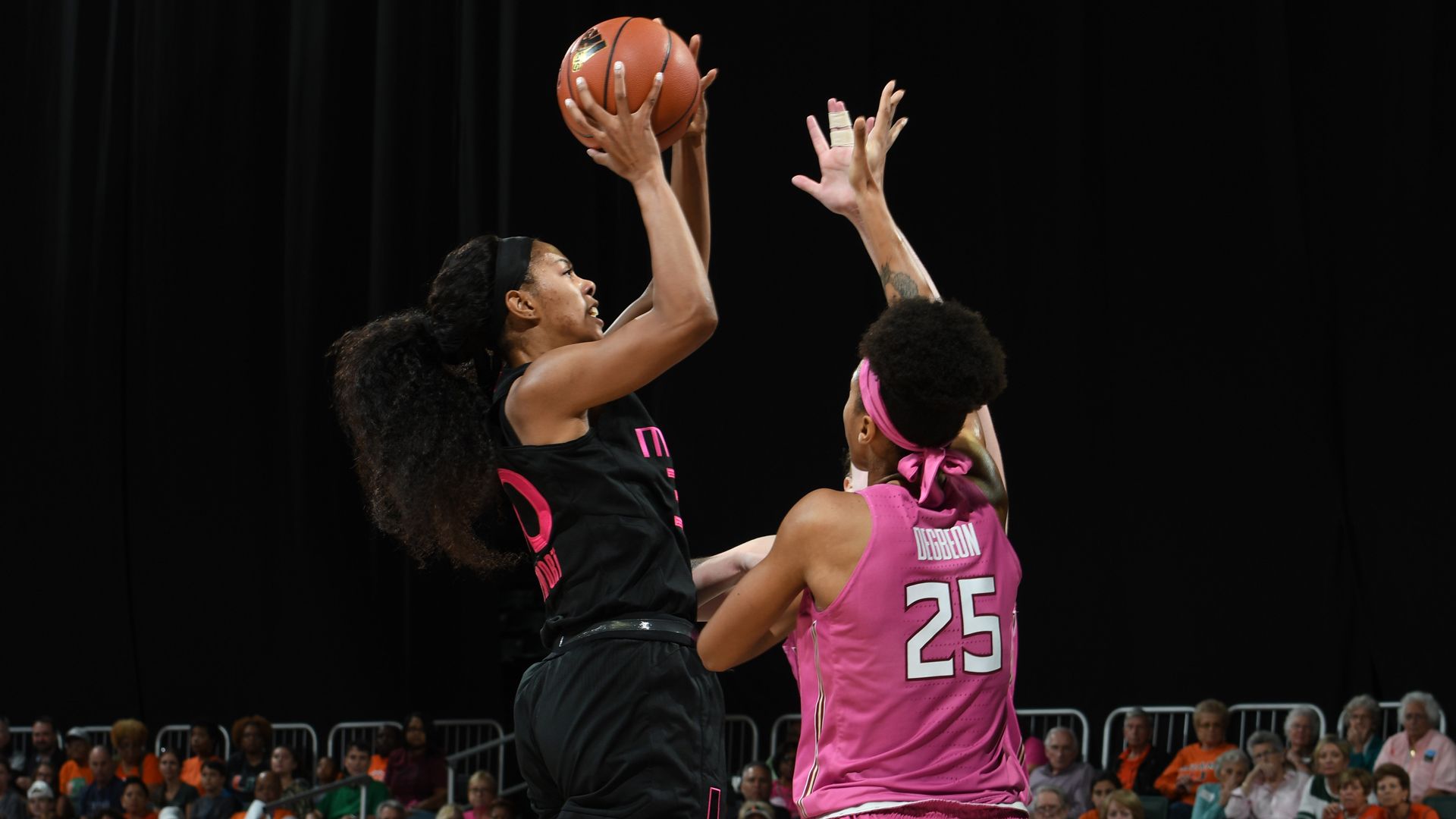 Miami (17-8, 7-5 ACC) came up on the short end of a 91-71 result against No. 12/12 Florida State despite senior forward/center Erykah Davenport’s tallying her ninth double-double of the season with a co-game-high 21 points and game-best 12 rebounds.

“They were relentless with their commitment to transition,” Miami head coach Katie Meier said of the Seminoles. “Their commitment to rebound, to attack in transition and to get to the free-throw line [was outstanding]. They looked like a well-oiled machine. No matter who was on the court for them, they were very connected and very determined.”

After a high-scoring first quarter, Florida State (21-4, 9-3 ACC) held a 28-18 lead behind nine points from senior center Chatrice White, who made all four of her field goal attempts.

The Hurricanes used a 10-3 run in the third frame to slice their deficit down to 12, 61-49, with 4:48 remaining in the quarter. The Seminoles responded with nine straight points and led by 17, 71-54, entering the last session.

“We wanted to win the third quarter by eight and give us an eight-point different going into the fourth,” Meier said. “We were up four there and then . . . we hit a wall there and we mentally lost our focus.”

Miami was unable to get any closer than 16 in the final frame and the Seminoles came away with the victory.

Davenport’s sixth 20-point game of the season, including her fifth in ACC play, came on 8-of-13 shooting from the field and 5-of-5 shooting from the line. Her fellow fourth-year senior in the frontcourt, forward Keyanna Harris, tallied 13 points, tied for the fifth-most in her career.

“The seniors are supposed to step up against Florida State,” Meier said. “They’ve had such different roles this year and they are playing their guts out, but we needed someone to settle us down in key moments.

The Seminoles finished the game with a 43-29 edge in rebounding and outscored Miami, 46-32, in the paint, just the seventh time this year the Hurricanes have been behind in that category.

Miami will be back in action Thursday at 7 p.m., when it hosts Pittsburgh to conclude a three-game homestand.

MIAMI HURRICANES POSTGAME NOTES
– The Hurricanes dropped to 12-43 in the all-time series with Florida State.
– Sunday’s crowd of 2,527 was the second-highest of the season at the Watsco Center and the sixth-most people the Hurricanes have played in front of this year.
– Davenport now has 11 double-doubles in her career, with four of them coming against ranked opponents and six—all this year—versus ACC teams.
– Florida State’s 52 points, 57.1 field goal percentage and 20 made field goals in the first half trailed only their marks in their pror game against the Hurricanes (57 points, 59.5 percent and 22 makes) for the most by a Miami opponent before the break this season and the lone higher number in any area the Hurricanes conceded this year was a 66.7 percent clip by Louisville in the second half.
– Davenport reached 75 games started and 150 made free throws as a Hurricane, Harris eclipsed 300 rebounds in her career, Marshall moved past 200 points and reached 50 rebounds at Miami, while redshirt senior guard/forward Shaneese Bailey reached 950 points as a collegian.