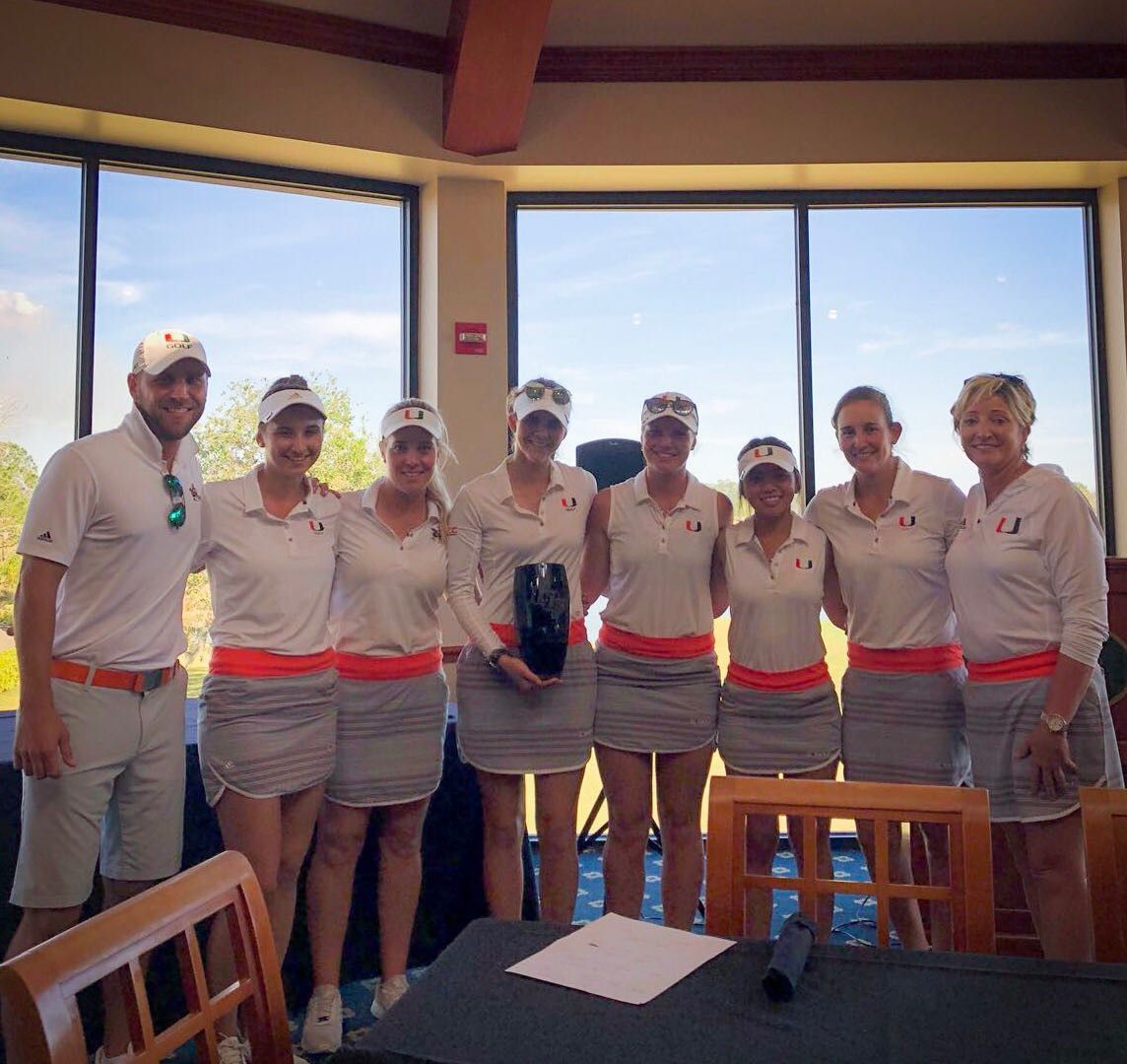 ORLANDO, Fla. – With the help of top-two finishes from Dewi Weber and Renate Grimstad, respectively, the University of Miami golf team won the UCF Challenge for second straight year Tuesday, combining for a team score of 868 in the three-day event.

Miami held off East Carolina University by four strokes to repeat its triumph from last year. The Hurricanes have now won consecutive tournaments after triumphing at the Florida Challenge last week.

“We have great team chemistry this year, probably the best I’ve had in my 14 years of coaching,” Miami head coach Patti Rizzo said. “I got a little nervous when the gap got closer today, but we had a superstar finish. There is great karma with this team right now and it takes that kind of stuff to win. It’s exciting and a lot of fun to coach them.”

The champion Weber (209), a junior, shot two-under-par at the Par 72 Eagle Creek Golf Club to lead the Hurricanes in an even final round (288), which was the team’s second-best in the Challenge after a 285 score Monday. Miami has now won consecutive tournaments after triumphing at the Florida Challenge last week.

“The conditions were pretty great today,” said Weber, who picked up her third individual victory in her career. “I felt like if I could shoot 4-under it would be good enough to win and my mindset was to try to get birdies on every hole. This tournament was a good test and a good confidence builder and we’re only going to grow from here.”

The Groningen, Netherlands native was one of three golfers – and the sole one among the top 20 – in the field who retained their position from the second round.

Grimstad, a sophomore, could not match her scores from the previous two days, but her final-round score of 73 still allowed her to move a position and finish second with a total score of 215. She beat Iowa State’s Alanna Campbell, Vanderbilt’s Virginia Green and Southern Methodist University’s Brigitte Dunne by one stroke in the top five individual standings. This was Grimstad’s 12th-career top-five finish.

Weber posted five birdies and nine pars on the final day, while Grimstad signed off with an eagle on Hole 18 to add to her two birdies and 12 par.

Freshman Kristyna Frydlova also snuck into the top 15 of the field after enjoying her best round in the Challenge, tying Weber on the day to complete the even tied for 12th with a score of 219.

Sophomore Macarena Aguilera shot three birdies Tuesday on her way to shooting a 75 for a final score of 226, which barely left her one stroke outside of the top half of the 90-golfer field.

Freshmen Roos Haarman and Serena Hou, who rounded off Miami’s event roster, finished back-to-back in the standings with final scores of 233 (T-74th) and 234 (79th), respectively. After demonstrating an improvement of 13 strokes between rounds one and two, Hou shot a 77 in the final round of the tournament, two strokes better than Haarman.

Auburn (878) joined East Carolina (872) in the top three, while Vanderbilt and Wisconsin shared the fourth place with scores of 880 to round out the top five.