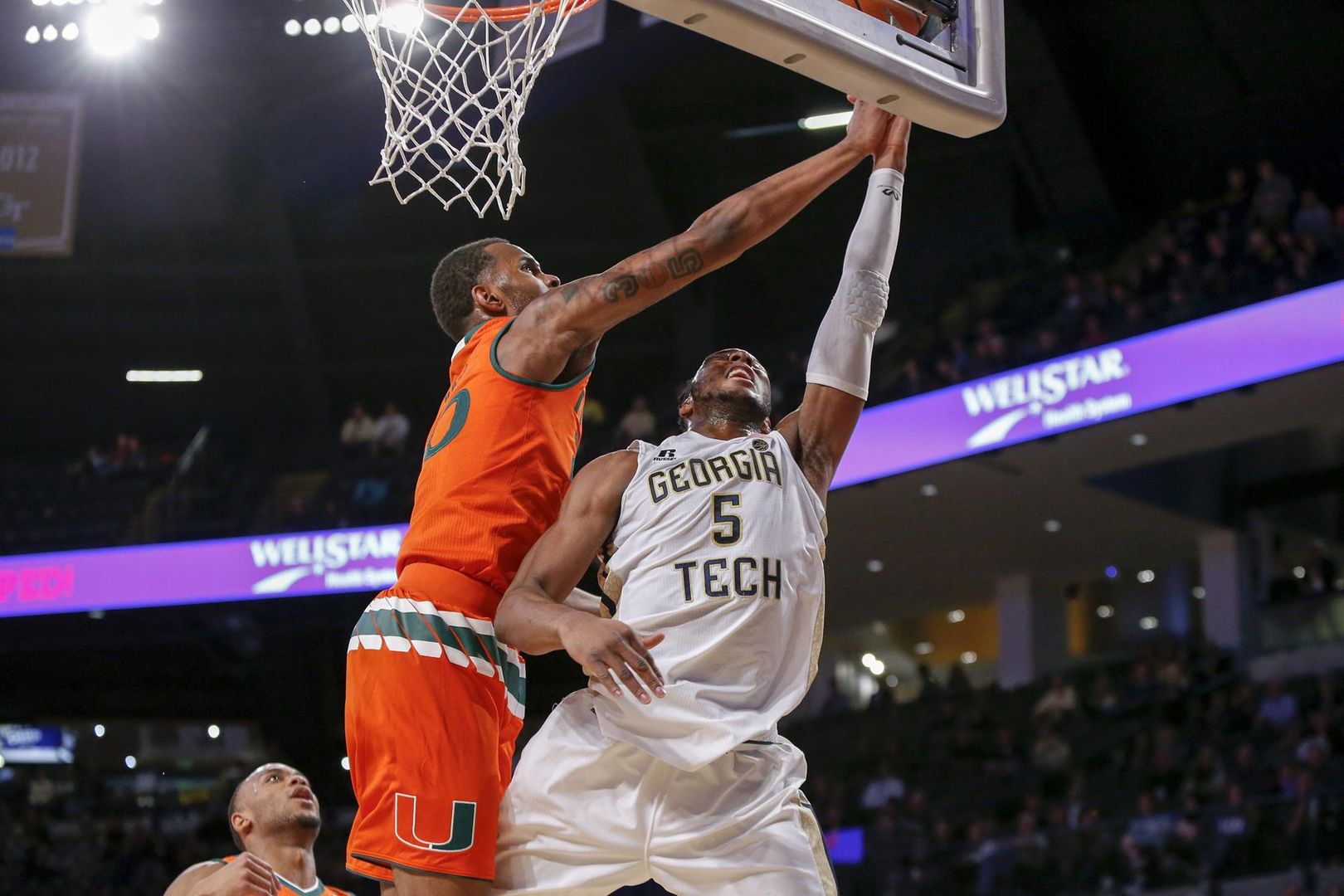 The defeat spoiled a memorable night for Miami (12-2, 1-1 ACC) senior guard Ja’Quan Newton, who scored six points to surpass the 1,000-point mark in his career. Newton became the 38th player in program history to achieve the feat after a fastbreak layup in the first half.

Trailing by 12 with fewer than 12 minutes on the clock, Miami went on a 10-0 to come within two at 48-46 on a pair of free throws by freshman guard Chris Lykes with 3:47 left, but the Yellow Jackets (7-7, 1-1 ACC) forced some costly turnovers and converted from the field and free-throw line to seal the win.

Sophomore center Dewan Huell was the sole Hurricane in double digits, pacing Miami with 13 points. Junior guard Anthony Lawrence II fell a point short of a double-double after racking up career-high 12 rebounds for the Canes. Miami’s defense could not find a way to stop Georgia Tech’s Josh Okogie, who tallied 30 points while also leading the Yellow Jackets in rebounds with nine.

The Canes enjoyed the best run of a back-and-forth first half, grabbing 10 straight points to enjoy their largest advantage of the opening frame, 17-9. Newton’s iconic bucket, however, made for two of just four Miami points in the final five minutes of the frame. Okogie (six), Jose Alvarado (four) and Ben Lammers (four) combined for 14 of Georgia Tech’s final 19 points of the half, helping the Yellow Jackets tie the game heading into the locker room, 28-28.

Georgia Tech started the second half the way it finished the first, on a run that extended its lead to 12 while allowing only six Miami points in the opening 11:58 of the second half. The Yellow Jackets went 11-of-15 from the charity stripe in the second half and notched 21 points off 18 Miami turnovers in the game.

Miami returns home after over a month on the road, welcoming No. 24 Florida State Sunday at 6 p.m.

Team• Miami leads the series with Georgia Tech, 13-9, including 12-7 in ACC play, and had its five-game win streak in Atlanta snapped.
• The Hurricanes finished their six-game road trip with a 4-2 record. They play their first home game since Dec. 5 on Sunday against Florida State.
• UM committed a season-high 18 turnovers, leading to 21 Georgia Tech points. Miami’s previous season high was 15 turnovers against Pitt and Boston University.
• Miami was tied at the half for the fifth time this season.
• The Hurricanes went scoreless for 6:40 in the second half as Georgia Tech went on a 10-0 run.
• Miami answered that run with a 10-0 run of its own, spanning 4:54.
• Miami had 10 assists on 13 first-half field goals.
• Josh Okogie’s 30-point effort was the first 30-point game by a Miami opponent since Dennis Smith Jr. (31), at NC State on Feb. 4, 2017.

Individual
• Ja’Quan Newton scored 6 points to become the 38th Hurricane to reach 1,000 career points. He now has 1,001 career points.
• Chris Lykes recorded a career-high five assists, all coming in the first half. His previous high was four against North Florida on Nov. 25.
• Anthony Lawrence II recorded 12 rebounds, setting a career high and matching the most by a Hurricane this year. His previous high was 10, set twice previously.
• Dewan Huell scored 13 points, reaching double figures for the 11th time in 14 games.