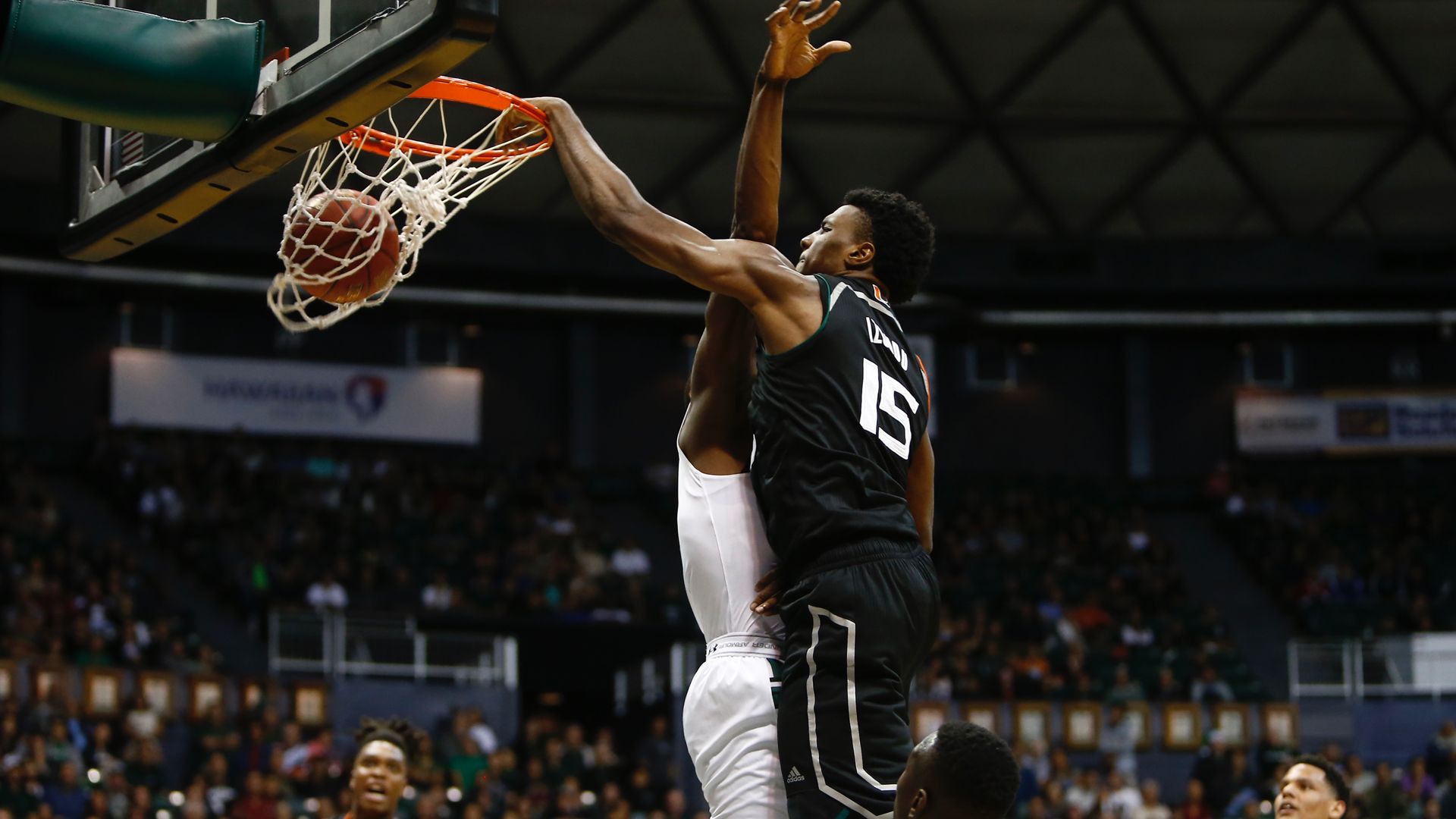 HONOLULU, Hawaii – Behind a strong second-half performance, the No. 6/7 Miami men’s basketball team pulled away and defeated Hawai’i, 75-57, Saturday in the first round of the Hawaiian Airlines Diamond Head Classic at the Stan Sheriff Center in Honolulu. Dewan Huell and Ja’Quan Newton scored 16 points apiece to lead a balanced Miami attack.

Off to their best start in 10 years, the Hurricanes (10-0) remained one of the nation’s four remaining unbeaten teams and advanced to the tournament semifinals Saturday at 10 p.m. ET, with a matchup against New Mexico State (10-2), which rallied for a 69-68 win over Davidson Friday. ESPN2 has the TV broadcast, while WQAM 560-AM has the local radio broadcast.

Miami shot 53 percent in the game, including 69.6 percent (16-for-23) in a sizzling second-half outing. After shooting 45.8 percent in the first half, the Rainbow Warriors (7-3) were held to 38 percent from the field in the second half and 42 percent for the game as Miami limited its eighth opponent in 10 games to fewer than 60 points. Miami forced 16 Hawai’i turnovers and out-rebounded the Rainbow Warriors, 31-26.

After the teams played to a 33-33 draw in a spirited first half, Miami locked down defensively and exploded offensively in dominating the second stanza. UM moved ahead by seven early in the second half, but a Leland Green 3-pointer pulled the Rainbow Warriors within four, 48-44, with 13:35 remaining. The Hurricanes then rolled off nine straight points, capped by a Lonnie Walker IV layup on a fast-break dish from Brown, to take a 57-44 lead and prompt a Hawai’i timeout. The Rainbow Warriors got no closer than 10 points the rest of the way, while Miami stretched its lead to as many as 20 points.

Game Notes
Team
• Miami holds a 4-1 lead in the all-time series with Hawai’i.
• The Hurricanes are now 3-0 in true road games this year.
• Miami held an opponent to fewer than 60 points for the eighth time in 10 games this year.
• Miami trailed in the second half for the first time this season when Hawai’I took a 36-35 lead at the 19:13 mark of the half.
• UM will play New Mexico State for the first time in program history Saturday.

Individual
• With 16 points today, Dewan Huell scored in double figures for the eighth time in 10 games.
• Ja’Quan Newton scored a season-high 16 points and now has 970 in his career.
• Bruce Brown picked up eight assists. It marked his third career game of eight-plus assists (the other two came as part of triple-doubles).
• Chris Lykes recorded a career-high five rebounds.