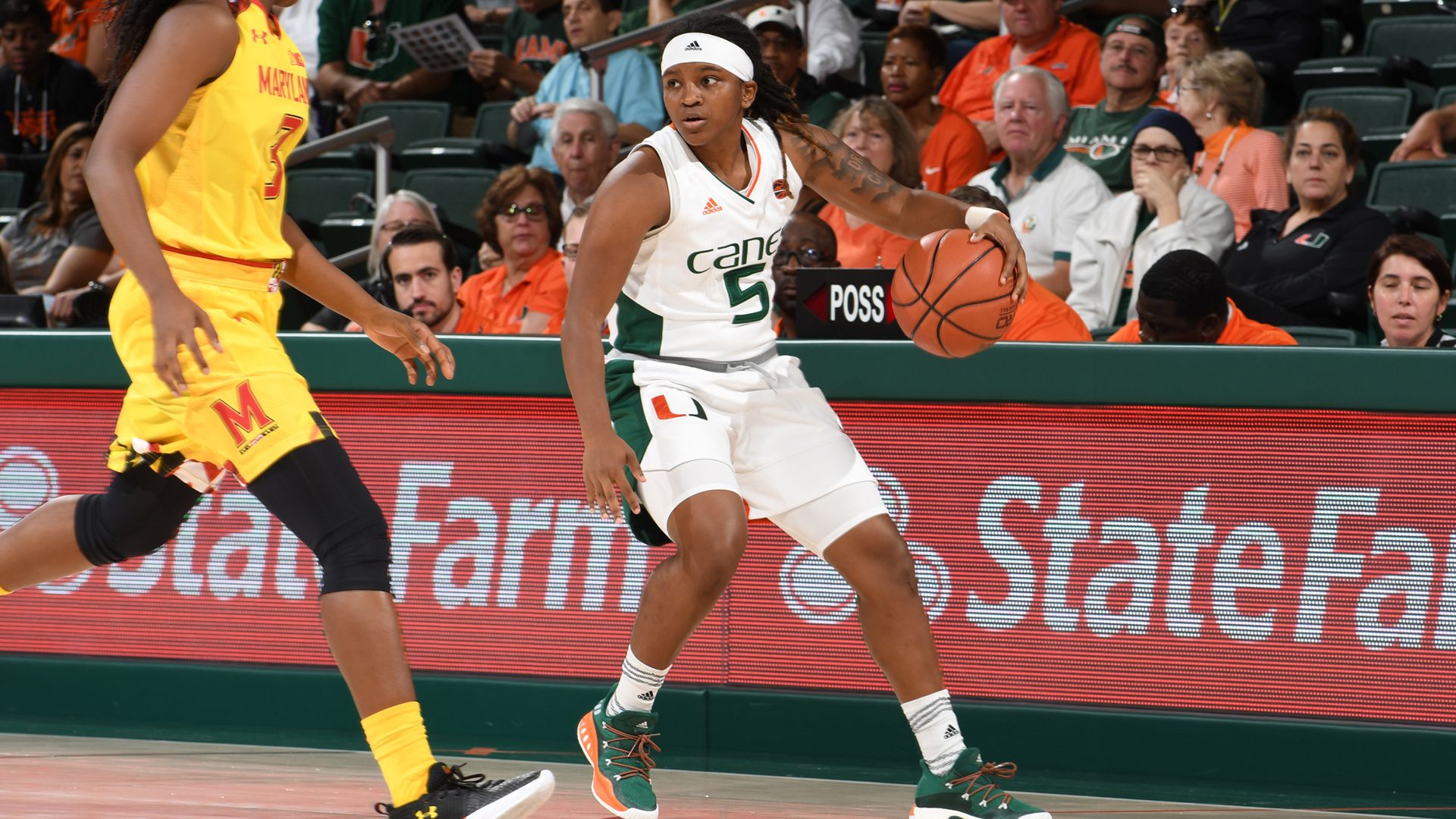 CORAL GABLES, Fla. – In its first game against a ranked opponent this year, the University of Miami women’s basketball team dropped a narrow 79-71 decision to No. 15/15 Maryland Sunday afternoon.

Miami (4-2) had three freshmen guards score double-digit points, with Mykea Gray’s 21 leading the way. The Terrapins, though, had five players finish in double figures and left the Watsco Center as the lone team to go 2-0 in the Miami Thanksgiving Tournament.

“It was time for us to figure out how good we can be and we needed a challenge,” Miami head coach Katie Meier said. “I told them in the locker room, ‘In life, you are either challenged or threatened and you either get bigger because the challenge does not scare you or get smaller because you feel threatened by the challenge.’ I knew Maryland would challenge us, but I said to the team, ‘They better not threaten you . . . and respond every time you are challenged.’ At the very least, we did that.”

The Hurricanes closed the opening period on a 6-0 run over the final 62 seconds to take a 20-16 advantage through 10 minutes of play. Junior forward/center Emese Hof, making her first start of the season, capped the stretch with a buzzer-beating putback layup.

Miami concluded the second period with another buzzer beater, this one on a coast-to-coast drive by senior guard Neydja Petithomme. The basket sliced the Hurricanes’ deficit to one, as the Terrapins led, 36-35, at the break.

Maryland (5-2) redshirt senior guard Ieshia Small scored 14 points in the first half, going 5-of-6 from the floor and 4-of-4 at the line.

The Terrapins started the third session on an 11-3 run to take a nine-point lead, but Miami outscored them by eight the rest of the frame. It remained a one-point game, 58-57, going into the last period.

“They have a role—to score. Unfortunately, they also need to play defense, too,” Meier said of Gray, Marshall and Banks. “We are putting too much on them, but they answered the bell today.”

Small led all scorers with 23 points, finishing 7-of-10 from the field and 9-of-10 at the stripe, and pulled down 10 rebounds. Sophomore guard Kaila Charles registered 18 points and 12 rebounds, freshman guard Channise Lewis posted 12 points and senior guard Kristen Confroy added 10.

The Hurricanes held Maryland to 3-of-20 shooting (15.0 percent) from 3-point range and pulled down 20 offensive rebounds in the defeat. Of the Terrapins’ five victories this year, this was the one in which they scored the fewest points and allowed the most.

Miami returns to the court Thursday at 7 p.m., when it hosts Michigan State in the Big Ten/ACC Challenge.

MIAMI HURRICANES POSTGAME NOTES
– The Hurricanes are now 5-11 all-time in their series against Maryland, including 4-3 over the last seven meetings, with this serving as first non-conference matchup between the two since March 21, 2004.
– Gray has finished with double-digit points in each of the first six games of her career, posting over 20 on three occasions.
– This was just Miami’s ninth home defeat since the start of the 2014-15 campaign and the Hurricanes are now 107-21 (.836) at the Watsco Center since the start of the 2010-11 season.
– Gray surpassed 100 points as a collegian, Petithomme eclipsed 750 minutes played in her career and Davenport moved past both 250 made field goals and 1,750 minutes played at Miami
– Maryland’s Small was named Miami Thanksgiving Tournament MVP, while Charles was tabbed to the All-Tournament Team along with Miami’s Davenport and Gray, Kennesaw State’s Carlotta Gianolla and Maine’s Julie Brosseau.