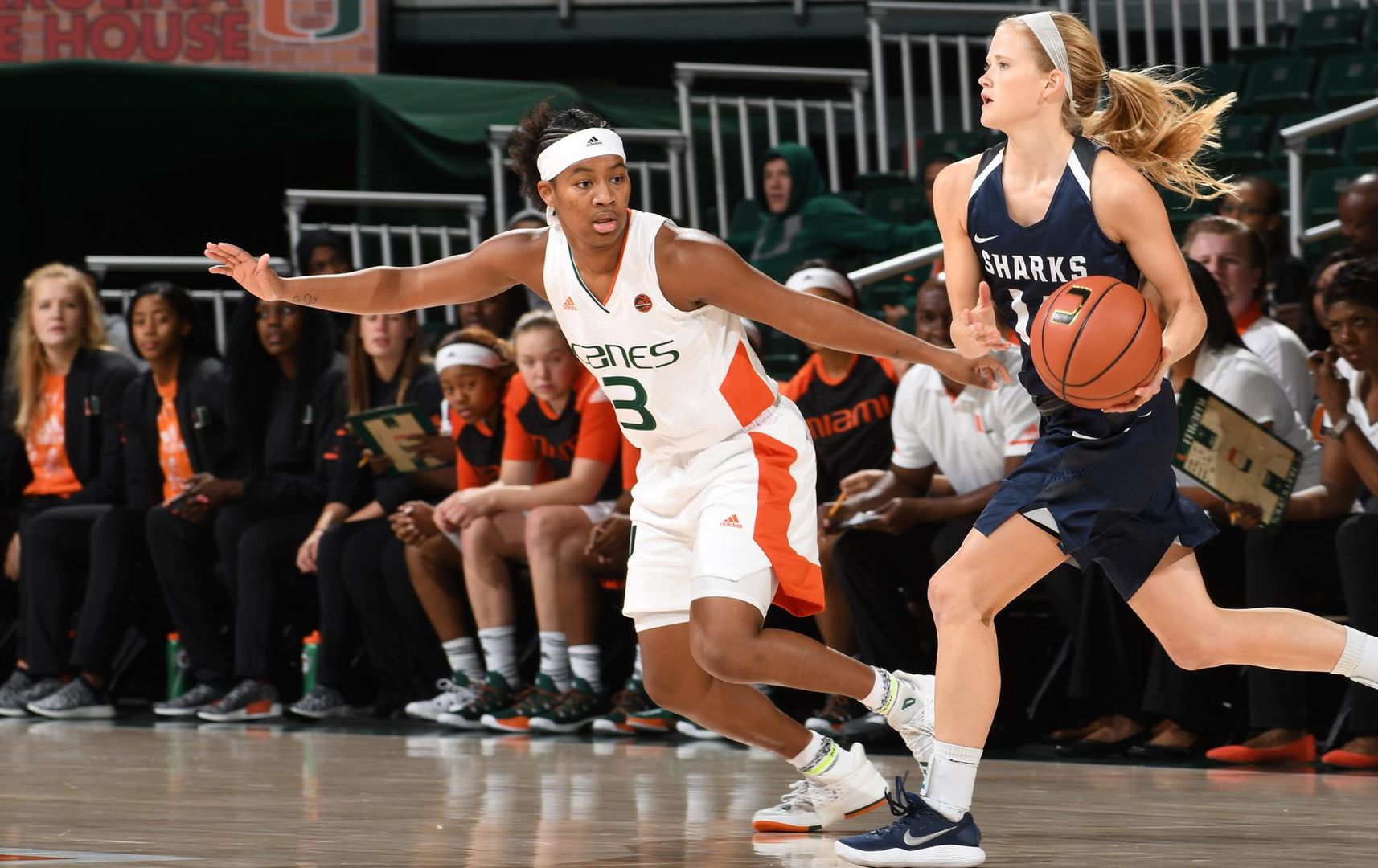 The Hurricanes cruised to a 102-47 victory over the Sharks at the Watsco Center, as four Miami players finished with double-digit points, led by senior forward/center Erykah Davenport’s 17.

“That was a lot of fun. I really did not know what to expect. We had some questions to answer, but I have never had so many unknowns with so many options,” Miami head coach Katie Meier said. “. . . To have 12 in the mix right now and trying to figure it out with veteran players who aren’t playing right now [is not easy]. So, I am just going with the young kids and seeing what they can do. I thought Keke [Harris] and Erykah did a great job at holding down the fort and making sure that energy was up and let those kids play freely.”

Miami came out scorching hot offensively to open the game, shooting a 12-of-20 from the field in the first period, including 3-of-5 from long range. The Hurricanes closed the session on a 14-2 run to take a 27-15 lead through 10 minutes of action.

The second quarter began with Miami scoring eight straight points to up its run to 22-2 and its lead to 20. In addition to continuing its offensive onslaught in the second frame, Miami also played lockdown defense.

“The second unit tonight, the reinforcers, they amped our energy up,” Meier said of what clicked during the 40-6 run. “They pressured the ball a lot harder than the starting lineup did and that was the story of the game.”

Davenport and freshman guard Mykea Gray combined for 25 points before the break, posting 13 and 12, respectively.

Miami increased its advantage by an additional point in the third period and took a 76-31 lead into the final period.

As they did in each of the first three sessions, the Hurricanes tallied 23-plus points and outscored the Sharks by double figures in the fourth quarter. Miami made its final four shots of the game, with freshman guard Kelsey Marshall’s fourth and final 3-pointer of the night putting the Hurricanes into triple figures.

Guard Endia Banks, who joined Marshall in the starting lineup, had six points, as did fellow guard Taylor Mason, with each posting a co-team-high four assists. Guard/forward Rebecca Ripley added five points in the win.

“I thought they played pretty composed, they weren’t frozen,” Meier said of the freshmen. “The style that we are trying to get to is a complicated system. I coach in sentences more so than play calls and we just build on top of action. That’s just not easy and to play with pace this early with the action I was calling was pretty impressive.”

The Hurricanes begin the regular season Nov. 10 at 6 p.m., when they host FIU in a crosstown matchup at the Watsco Center.