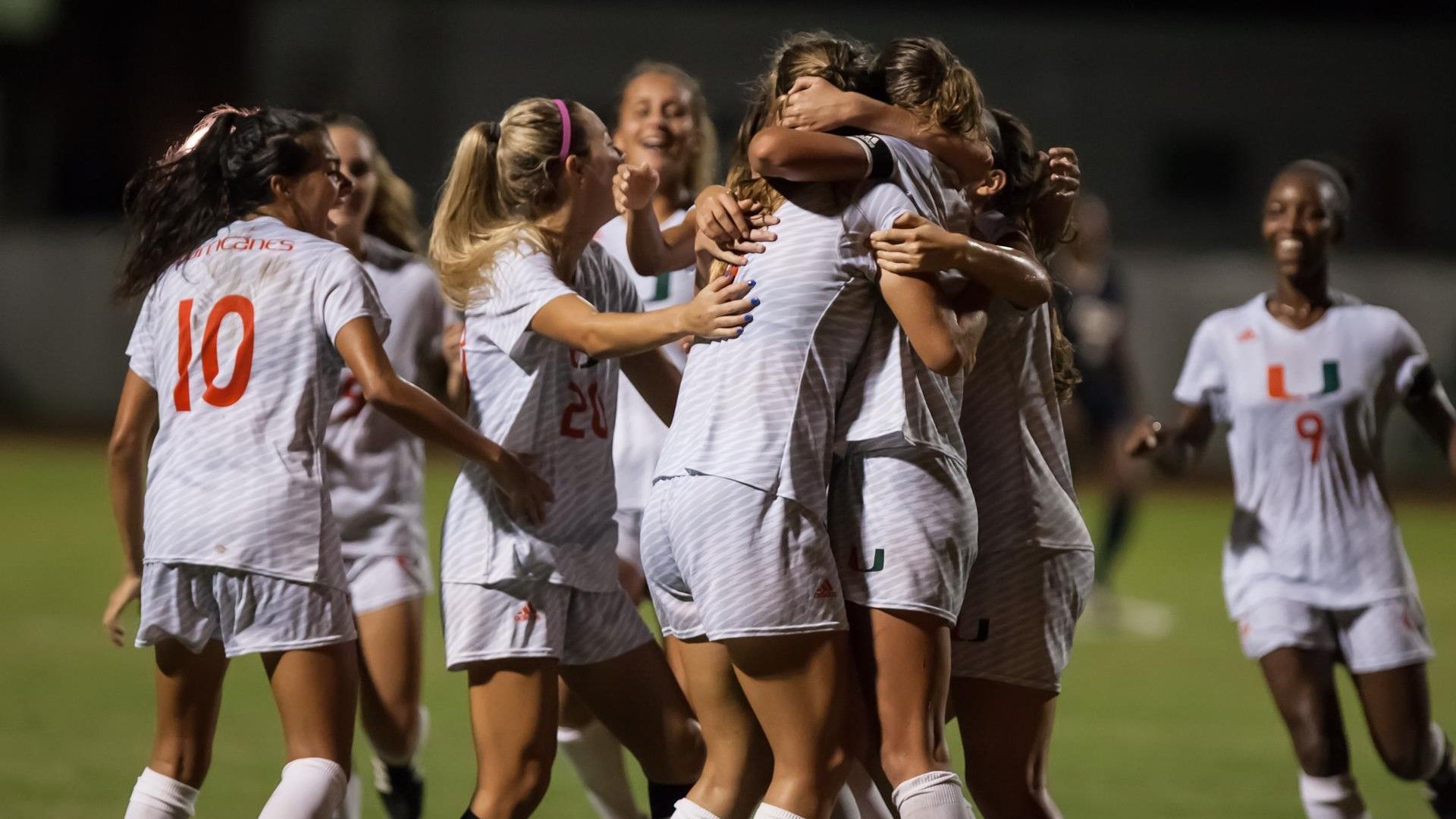 Senior forward/midfielder Grace Rapp logged her first brace of the season, as the Hurricanes recorded a trio of second-half goals to earn the dominant win in their second-to-last home match of the year.

“The last few games, I still feel like we had some good attacking moments, but today we decided to put the ball in the back of the net,” Miami head coach Mary-Frances Monroe said. “We did a really good job with our combination play. I actually talked about that in training this week.”

The Hurricanes nearly struck for the match’s opening goal in the 43rd minute on a shot by sophomore midfielder Kristina Fisher, but Pittsburgh (3-10-3, 0-7-1 ACC) redshirt freshman goalkeeper Amaia Pena made a spectacular kick save.

Rapp almost scored in the closing seconds of the half, but Pena made the stop on her header just before the horn.

Miami (5-9-0, 1-7-0 ACC) narrowly outshot the Panthers, 6-5, in a scoreless first half, while redshirt junior Phallon Tullis-Joyce posted half of her six saves.

Sophomore midfielder Lauren Markwith, in a reserve role for the first time all season, put Miami ahead in the 49th minute. Junior midfielder Jamie Brunworth sent in a stellar corner in from the left side and Markwith headed into the net to open the scoring. It would prove to be the first game-winning goal of Markwith’s career.

“It was a fantastic ball by Jamie. We’ve been working on our set pieces all year and I’m really happy about the connection,” Monroe said. “Lo is fantastic in the air. So, I’m just really happy that she changed her pace a bit in the box, got up and scored a great goal for us.”

Miami doubled its lead in the 64th minute after some beautiful ball movement by a trio of Hurricanes on the attack.

Fisher passed the ball to Rapp and she quickly tapped it to Ronnie Johnson. The senior forward then sent a heel pass behind her right back to a charging Rapp, who sent a vicious strike past Pena to make it 2-0.

Miami’s two senior attackers, Johnson and Rapp, teamed up again in the 82nd minute for the final goal of the contest.

After sophomore forward Dejah Cason stole the ball near midfield, she played it on to Rapp, who gave it to Johnson. As she did earlier, the Oakville, Ont., native returned a heel pass to Rapp and this time she put the ball past a diving Pena into the right side of the net.

“It was nice to see the connection between Grace and Ronnie, especially as two seniors gearing up for senior day on Sunday,” Monroe said. “It was really nice to see them connect and for Grace to get some more goals this season.”

For Johnson, this marked the first multi-assist outing of her college career. Additionally, she posted four shot attempts to move her 2017 total to 55, moving into a four-way tie, including with herself from last year, for ninth on the Hurricanes’ single-season list.

The Hurricanes’ continued to hold strong defensively and picked up their fourth shutout of the season, including the first since Aug. 25 at Miami (OH). Thursday also marked the third time in 2017 Miami has logged a trio of goals, with the last such occasion coming Sept. 3 at Quinnipiac.

The fourth shutout of the year for Tullis-Joyce puts her in a three-way tie for No. 10 on Miami’s single-season leaderboard. Additionally, she passed Elizabeth Swinson for fifth on the Hurricanes’ career minutes in goal list with 3,701.

Miami concludes its home slate Sunday at noon when it hosts Notre Dame on senior day. The match will be the final one at Cobb Stadium for Johnson, Rapp, Savage and goalkeeper Charlsey Zyne.