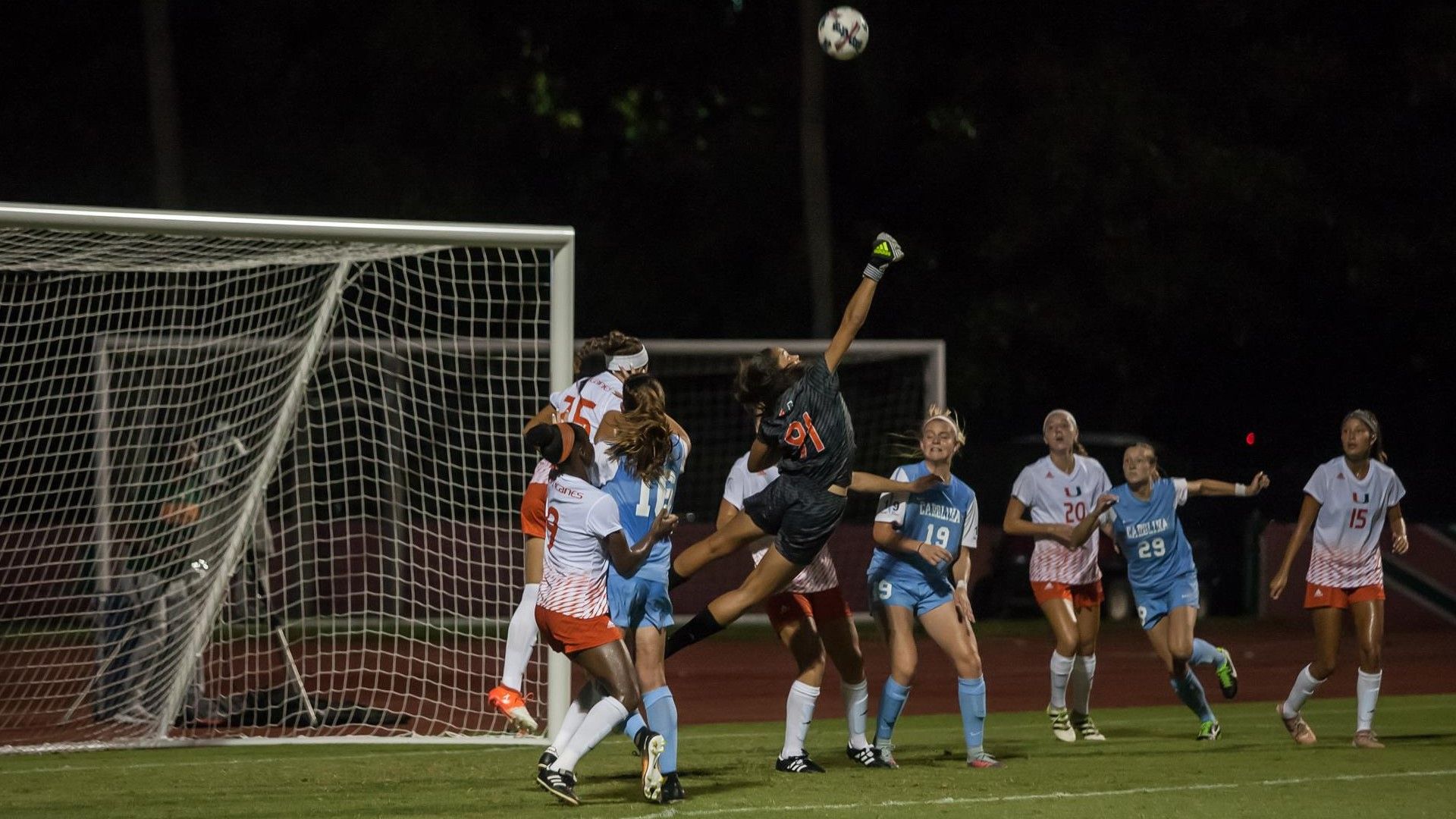 The Hurricanes held the 21-time NCAA champions scoreless through the first half of play, but the Tar Heels struck for a trio of goals after the break to earn the victory.

“I’m really proud of our team today, to hold Carolina to 0-0 at halftime,” Miami head coach Mary-Frances Monroe said. “We didn’t just hold them, I thought we had some great attacking moments and we could have finished some opportunities.”

Sophomore midfielder Lexi Castellano made a nice play in the seventh minute to deflect way a shot that seemed headed for the back of the net. Redshirt junior goalkeeper Phallon Tullis-Joyce then made her first save of the night on an excellent leaping stop, knocking the ball over the bar.

Miami (4-6-0, 0-4-0 ACC) nearly struck for a goal in the 14th minute, but the long-range strike from senior forward Ronnie Johnson clanged off the crossbar.

The Hurricanes had another scoring opportunity in the 33rd minute, posting three consecutive shots in the box, all of which were blocked by North Carolina (9-2-0, 5-0-0 ACC) defenders. The first two came off the foot of redshirt sophomore midfielder Ainsly Wolfinbarger and the last was by senior forward/midfielder Grace Rapp.

Tullis-Joyce impressed again in the 35th minute, coming off her line to deny sophomore forward Madison Schultz on a one-v-one effort from close range.

“I think our defending was really good. We did really, really well in the first half,” Monroe said. “Again, we created some chances on the attack and that’s what we’re trying to do as we move forward in the next few games.”

Soon after coming out of the intermission, the Tar Heels broke the deadlock. Freshman forward Alessia Russo made a quality individual run into the box, cut outside and buried her shot in the side netting to the far post in the 48th minute.

Sophomore forward Madison Schultz upped North Carolina’s edge to 2-0 in the 75th minute, deflecting in a shot by junior defender Julia Ashley, who earned an assist on the play.

Miami junior midfielder put the ball past North Carolina junior goalkeeper Samantha Leshnak in the 80th minute, but it was wiped away due to a close offside call.

Sophomore forward Bridget Andrzejewski added North Carolina’s final goal in the 89th minute after a giveaway by the Hurricanes in the defensive third.

This was just the second time in 29 matches over the last two seasons Miami has conceded three goals and both have come against the Tar Heels. Additionally, this was the first time in four ACC outings Miami has allowed multiple goals.

The Hurricanes wrap up three-match homestand Sunday at noon when they welcome Boston College to Cobb Stadium.