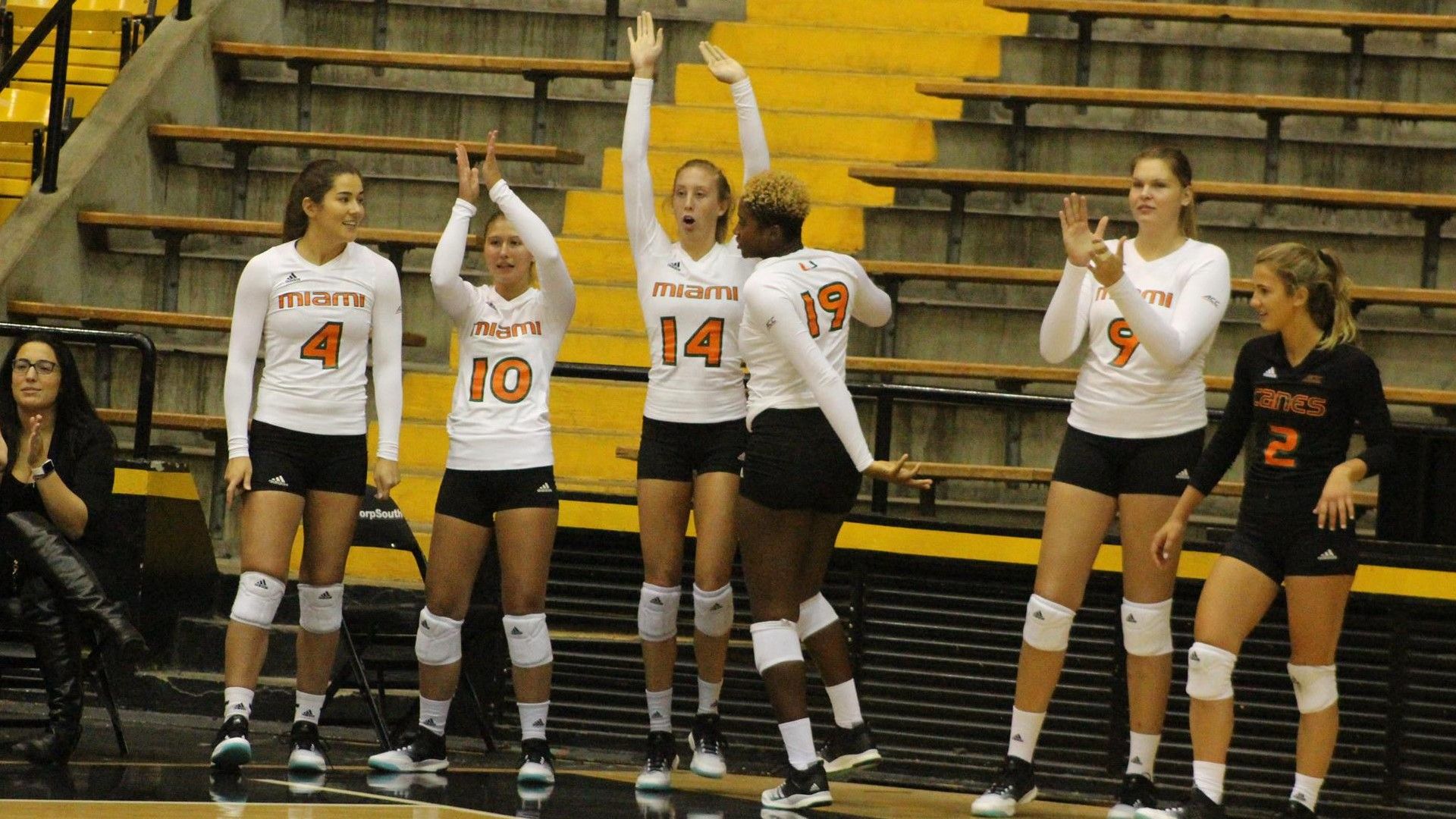 FORT MYERS, Fla. – The University of Miami volleyball team got its weekend off to a winning start after prevailing over FAU in a five-set thriller in Fort Myers, Fla., Friday.

After starting the match with a statement first set win, the Hurricanes (4-0) retained their composure after the Owls (3-2) twice tied the match with two-point triumphs in the second and fourth sets. Despite a resilient effort by FAU, the Canes outlasted its in-state rival (25-15, 25-27, 31-29, 23-25, 15-11) to retain its undefeated record.

For the first time this season, Miami had four players finish a match with double-digit kills. Senior outside hitter Olga Strantzali paced the Hurricanes with 21 kills, which was tied for match-high with FAU’s Sigourney Kame. Strantzali completed her double-double with 11 digs and continued her tradition of recording at least two aces this season. The pin hitter put the icing of another impressive performance with her first solo block of the campaign.

Junior outside hitter Kolby Bird returned to the Canes’ starting lineup and marked the occasion with a career-high 17 kills and contributed nine digs. Sophomore middle blocker Madison Dill led Miami’s blocking efforts with a career-high eight blocks and a season-high 10 kills. Her partner in the middle, junior Lucia Pampana, finished with a season-high 10 kills and contributed three of the Canes’ 13 team blocks.

Redshirt junior setter Haley Templeton, who played every single point of the match, tied her career-best performance of 56 assists while also contributing season-highs in kills (five) and blocks (four).

Senior libero Sylvia Hernandez was once again the stalwart in the Canes’ defense and finished with match-best 27 digs, 11 more than her counterpart, Alex Cardona.
With the teams tied at 14in the first set, a resounding 11-1 run closed out the win at 25-15 for Miami. Strantzali played a major role in the final run, contributing four kills and a solo block. At one point Dill and Templeton recorded back-to-back blocks to make it 19-14 Miami, which trailed 7-4 earlier in the set.

FAU benefited from Miami’s error-filled start of the second set, jumping out to an early three-point lead, 5-2. The lead grew to five at 10-5 and remained the same until 13-8, but Bird and Dill contributed blocks and kills that started a 7-1 Miami run to get the Canes within one – 15-14. FAU continued to lead throughout the set, but Miami got back in it when it mattered the most – kills by Bird and Strantzali in succession eliminated the Owls’ consecutive set points and tied the score at 24. Templeton and Dill came up with a big block right after to give their team a set point at 25-24, but Abbi Reid and Kame inspired FAU to one final run in the set, which tied the match at a set apiece.

Strantzali recorded her 10th kill to make it 10-10 and mark the sixth tied score early in the third set. A kill by Kristi Tekavec gave FAU the first three-point lead at 15-12, but a kill by Pampana and consecutive Owl errors locked the teams into a tie at 15. There was nothing to separate the teams as they entered the closing stage of the set at 20-20 and 18 points later, when the score was tied for the 19th time in the set – 29-29. Veterans Templeton and Strantzali demonstrated steel nerves late in the set and combined forces for the final two points of the set, putting Miami back in the lead – 31-29.

Gandara had to call a timeout early in the fourth set after FAU won four of the opening five points in the set. Gradually, Miami got back into the set and even put together a 5-0 run to match FAU’s largest lead on another Bird-Dill block, 13-10. The Owls provided a lightning-quick response and later on used a 5-0 run themselves to take a two-point lead in the set, 21-19. Kills from Strantzali and Bird managed to tie the set at 22-22 and 23-23, respectively, but big plays by Reid prevented one final momentum swing and sent the match into a fifth set, 25-23.

The start of the fifth set marked three quick lead changes and five tied scores before Miami managed to pull away by two, 7-5. Kame brought the Owls within a point with another kill, but the momentum was clearly on the Hurricanes’ side of the net and they went on to win four of the next five points, grabbing an 11-7 lead on a kill by Pampana. FAU halved that lead at 12-10 with back-to-back kills from Tekavec and forced a Miami timeout. The Hurricanes came out of the huddle swinging and outscored their opponent 3-1 to close the set at 15-11.

The Canes will close out the Sunshine State Classic with a doubleheader Saturday. Miami will first face UCF at 1:30 p.m., before taking on host FGCU in the tournament finale at 7 p.m.