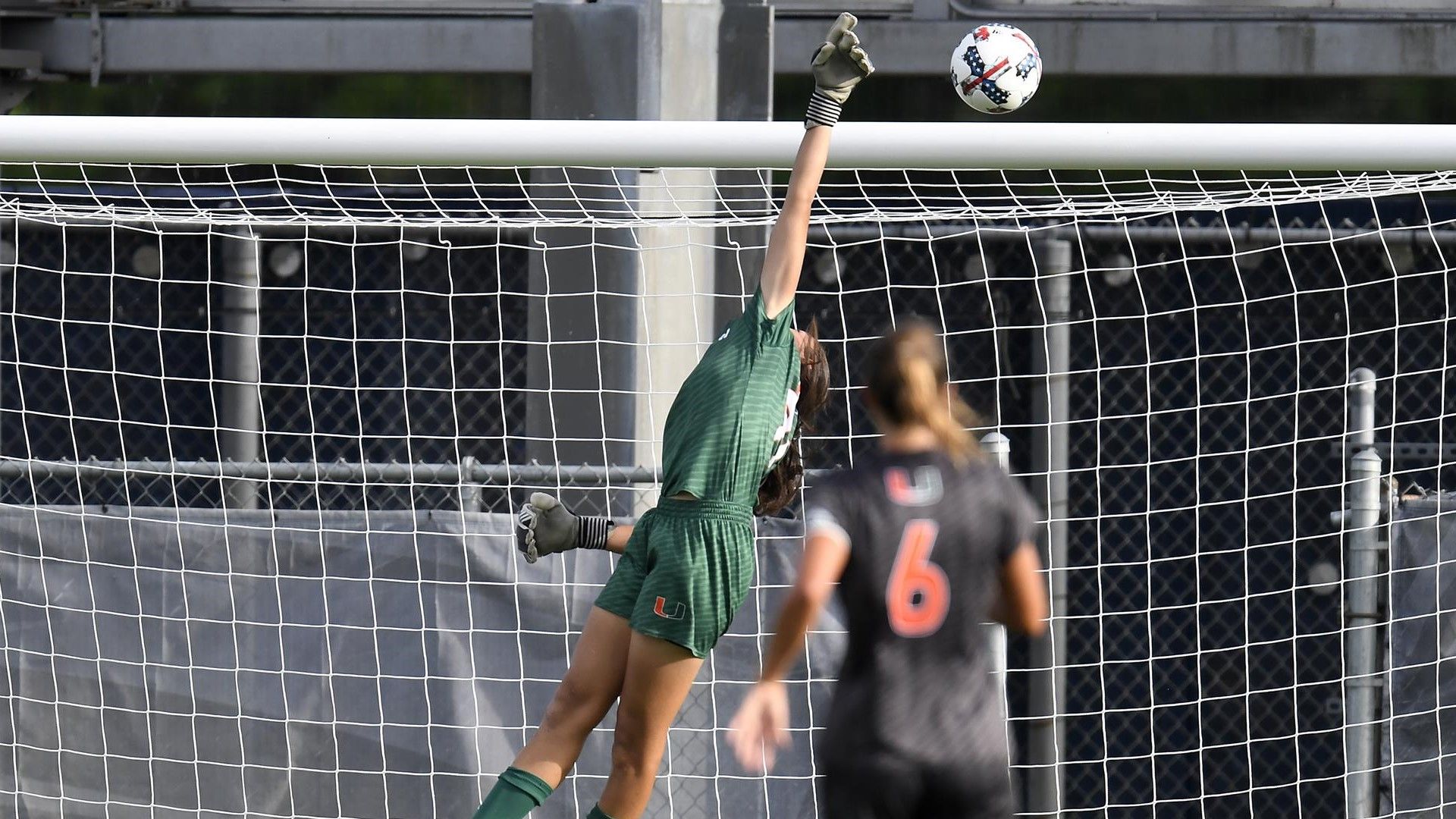 OXFORD, Ohio – For the second time in program history, the University of Miami soccer team has opened the season with three consecutive shutouts.

Miami (3-0-0) registered a 2-0 triumph at Miami (OH) Friday evening, riding a pair of early goals and a career-high-tying seven saves by redshirt junior goalkeeper Phallon Tullis-Joyce to the win at Miami Soccer Stadium.

“It’s nice to get a win on the road. That is always a really tough thing and the team just kept fighting today,” Miami head coach Mary-Frances Monroe said. “In the first half, I think, we had a little bit more energy and were a little bit more consistent with our attack, not making too many mistakes and we showed that by getting a few goals.”

Senior forward/midfielder Grace Rapp opened the scoring for the Hurricanes in the fourth minute, stealing the ball near the top of the box and then quickly sending it past Miami (OH) (0-3-0) junior goalkeeper Patricia Koutoulas.

The Hurricanes doubled their lead in the 13th minute when sophomore midfielder Kristina Fisher and senior forward Ronnie Johnson linked up for the third time in as many matches, this time for a beautiful goal.

Fisher beat a defender near midfield, played the ball to the right side, where a sprinting Johnson met it and then drilled it past Koutoulas, who was off her line. Johnson’s fourth goal of the season came from distance to the far post at a difficult angle. For Fisher, the assist was the 11th of her young career, moving her into sole possession of No. 10 on Miami’s all-time leaderboard.

“We threw a lot of numbers forward, we kept the ball and we had different pockets,” Monroe said of what worked to notch the early tallies. “We had different players be in different spaces we need to be in. On our attack, we were able to connect passes and just go to goal.”

Junior defender Maisie Baker nearly increased the Hurricanes’ edge to 3-0 in the 24th minute when her header off a corner kick hit the crossbar.

In the second half, the Hurricanes had another chance to up their lead, but again hit the woodwork. Johnson had her strike inside the box bounce off the far post and roll away to keep the RedHawks within two.

Tullis-Joyce made her most impressive save of the match the 74th minute to keep the shutout intact, coming off her line to deny senior forward/midfielder Chloe Knue’s one-on-one chance after a giveaway near midfield.

“Phallon did a fantastic job on the breakaway,” Monroe said. “Ultimately, that shouldn’t happen. We dispossessed and . . . she stepped up to the plate, made a great save and kept us from conceding a goal.”

The Shoreham, N.Y., native made another dazzling stop in the 83rd minute, diving to her left to stop a header by senior midfielder Katie Alexander off a corner kick. Tullis-Joyce finished with a career-high-tying seven saves to log her 12th solo shutout as a collegian.

Strong play down the stretch by Tullis-Joyce as the RedHawks pushed numbers forward helped the Hurricanes hold strong for the 2-0 win. Monroe’s side ended the contest with a 17-12 advantage in shot attempts.

The only other time in program history Miami began the season with three straight shutouts was in 1999, its second year of existence.

In addition, after going nearly four years without posting a trio of shutouts in a row at any point during a season, the Hurricanes have now done so in back-to-back campaigns. Last year’s streak, which went from Aug. 28-Sept. 4 and also included a win over Miami (OH), was the first such span since 2012.

“Just this team working together, buying in and gritting it out,” Monroe said of the defensive success. “We may not have the stars on the back line, but I can tell you this, they work really, really well together.”

This is also the eighth time the Hurricanes have started a campaign undefeated through three matches, including the seventh time they are 3-0-0. The last time Miami earned a victory in each of its first three outings was 2013.

Additionally, with the win, Miami made it back-to-back road shutouts for the first time since Sept. 6 and 11, 2015.

The Hurricanes will stay in the Buckeye State for their next match, which is set for Sunday at 1 p.m., against Cincinnati at Gettler Stadium in Cincinnati.