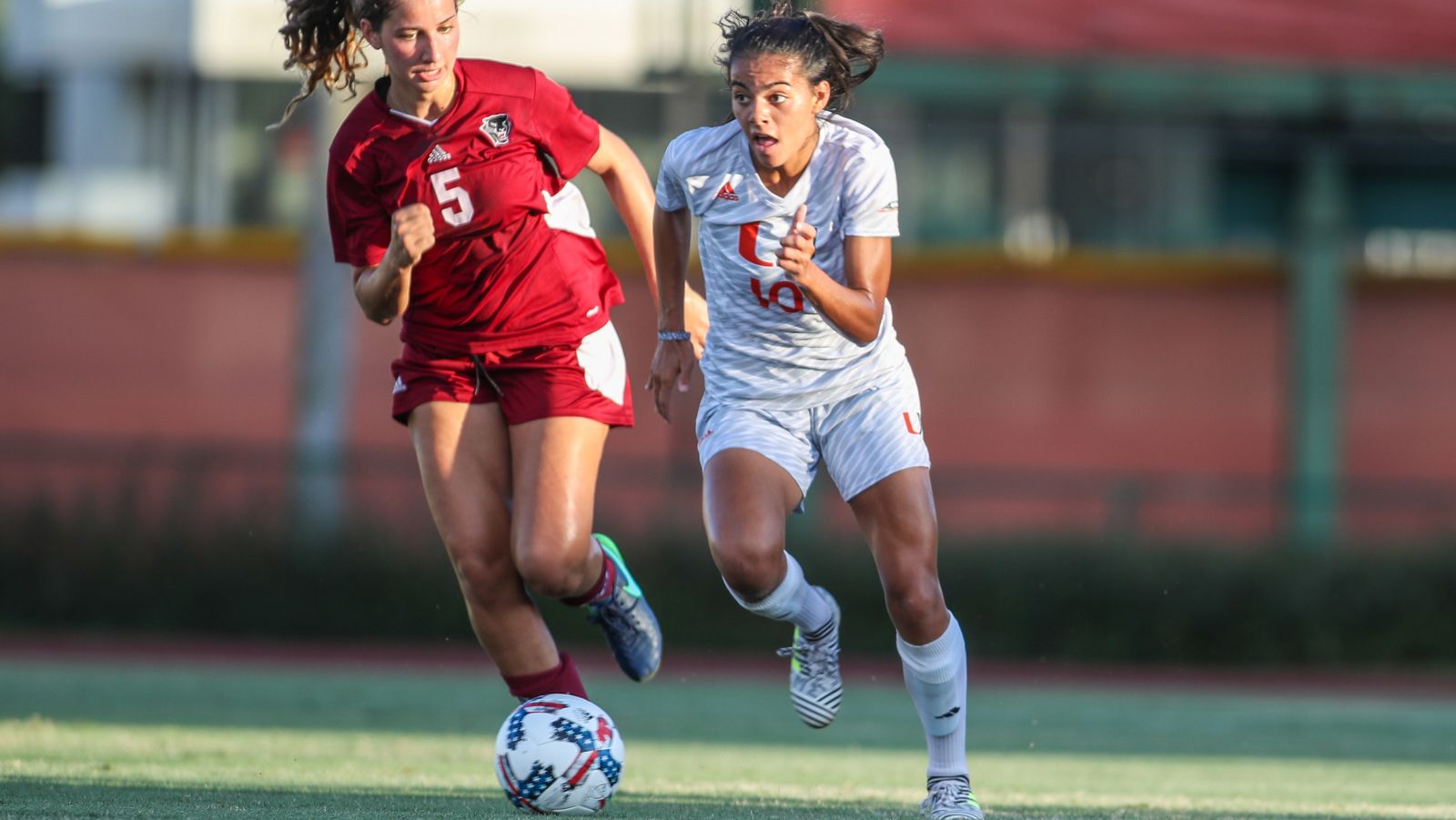 Sophomore midfielder Kristina Fisher scored twice and added an assist, all in the first 26 minutes, to help lead the Hurricanes to the resounding triumph in their first home action this fall.

“We came into this game focusing on us, what we wanted to do defensively and what we wanted to do on the attack,” Miami head coach Mary-Frances Monroe said. “We wanted our players to be creative on the attack. We give them some things here and there that are going to make them be successful, but we also want them to be creative in their own ways. So, you saw some personalities tonight getting some goals.”

Miami struck for its opening tally of the fall in the 15th minute after redshirt sophomore Ainsly Wolfinbarger, who entered the starting lineup Monday, made a stellar pass to Fisher. The Jupiter, Fla, native then dribbled by the goalkeeper and tapped it into the back of the net to give the Hurricanes the lead.

Fisher added a second goal just seven minutes later, once again beating Prisco on a breakaway. She received a long ball from senior forward Ronnie Johnson while on the run and then calmly buried it for a 22nd-minute tally.

In the 25th minute, Fisher again put her name on the score sheet, this time with an assist. She sent a cross into the box from the right side of the field to senior forward/midfielder Grace Rapp, who scored from the top of the six-yard box.

Playing at home for the first time as a Hurricane, freshman forward Michelle Giamportone scored on her opening shot attempt. After receiving a pass from junior midfielder Jamie Brunworth, Giamportone showed some nice footwork and then drove the ball into the netting to give Miami a 4-0 lead in the 40th minute.

The Hurricanes went into the intermission not just holding a four-goal edge, but also with a 9-2 advantage in shots, including a 7-0 lead in shots on goal, three of which came from Fisher.

Miami kept up its strong offensive play in the second half and added a fifth goal in the 62nd minute. Junior midfielder Niccola Venezia played the ball into the box to Lauren Markwith and she did the rest. The sophomore midfielder chested it down, settled, turned and put it in the upper 90 for an impressive finish.

The Hurricanes registered their sixth tally in the 82nd minute, as junior forward/midfielder Hanna Droh scored for the first time as a collegian. Freshman forward Tia Dupont played in a cross from the corner and Droh one-timed it for a goal.

In the 84th minute, Miami wrapped up the scoring for the evening. Johnson notched the lone unassisted goal of the night, using some fancy footwork to create space and then drilling the ball past the Panthers’ diving goalkeeper from about 20 yards out.

Two freshmen defenders Morgan Asmussen and Natalie White, made their debuts in the match, as did sophomore defender Tati Pardo.

This marked the second year in a row Miami concluded its exhibition schedule with a shutout victory in which it scored at least seven goals. The Hurricanes had a 24-6 lead in shot attempts, including an 11-3 edge in shots on goal, and a 6-0 advantage in corner kicks. Redshirt junior goalkeeper Phallon Tullis-Joyce made a trio of saves in the win.

“I think we’re in a pretty good spot. We definitely have things to work on,” Monroe said of her team entering the regular season. “I saw them fighting today and pretty much everyone got minutes. I think that they know, overall as a collective group, to be successful, we need to play together.”

Friday at 7 p.m., the Hurricanes will begin regular season competition when they host St. Francis (PA) at Cobb Stadium.