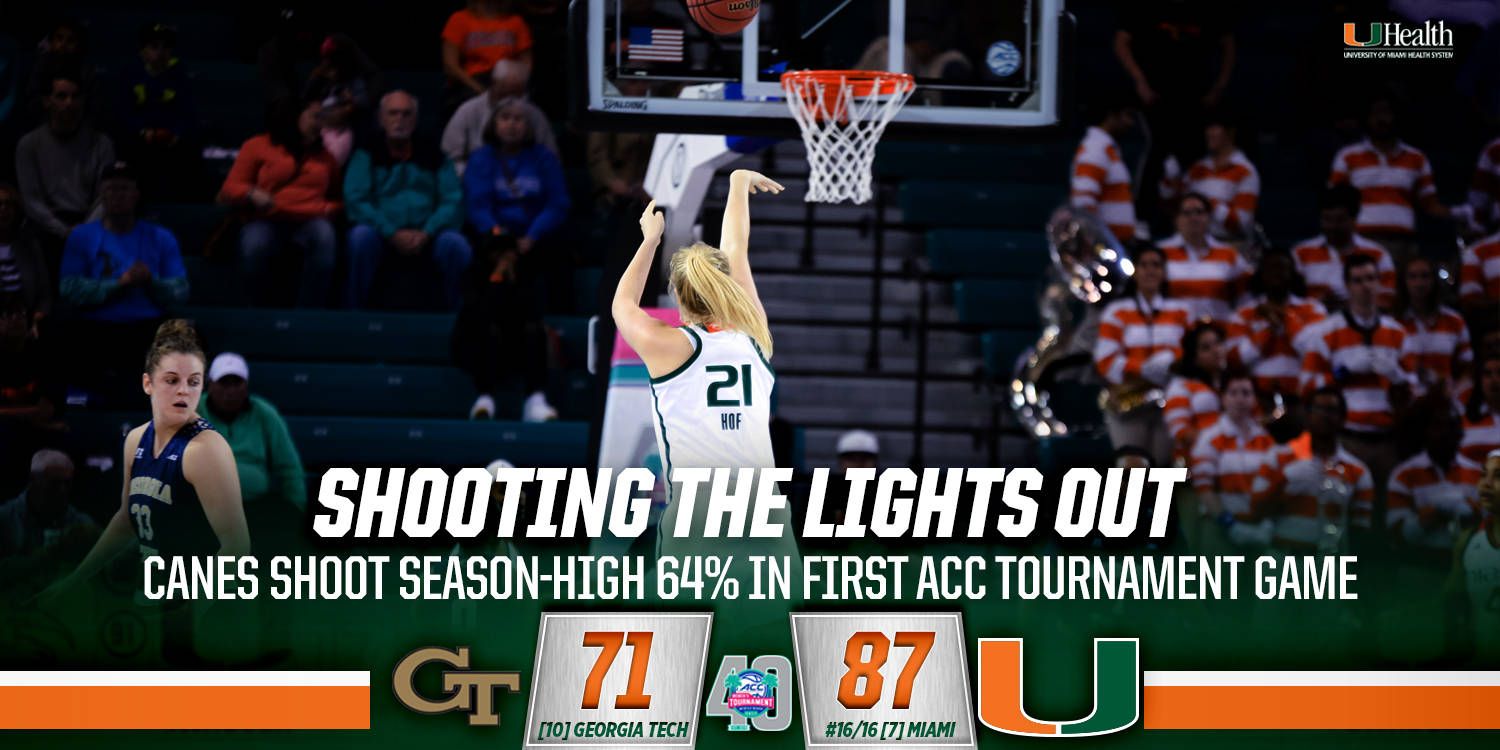 No. 16/16 Miami (22-7, 10-6 ACC) used its scorching shooting at the HTC Center to cruise past the Yellow Jackets in a game it trailed for just three seconds.

The Hurricanes, paced by redshirt senior forward Keyona Hayes’ 16 points on 8-of-11 shooting, led by double digits for the final 27 minutes and 11 seconds of the contest.

“When you hit shots early, then you can kind of control the game,” Miami head coach Katie Meier said. “. . . In our minds, when we control the game we are going to make sure we get really secure touches and don’t take any vulnerable shots. They are just really trustworthy kids; they are just a really nice combination.”

Miami pushed its lead to as many as 23 points in the second period behind a blistering shooting display. The Hurricanes cushion sat at 22, 47-25, entering the intermission. Miami’s 47 points in the opening half were tied for its second-most in a half in ACC Tournament action, including its most in the first half.

At the break, Miami was shooting 64.5 percent (20-of-31) from the field, while Georgia Tech was at 36.7 percent (11-of-30). The Hurricanes’ shooting percentage was their best in a half this season, while their 20 makes ranked second, including the most in an opening half. Senior guard Adrienne Motley had all 15 of her points in the opening 20 minutes, going 6-of-8 from the field in the half.

Georgia Tech used an 8-0 run during the third period to trim its deficit to as little as 12, but was unable to pull within single digits. Miami led by 14 points, 64-50, headed into the final session.

The Hurricanes shot 9-of-10 in the fourth period, including making each of their final eight shots, while holding the Yellow Jackets without a field goal for a span of four minutes and 32 seconds. Hayes made five shots in the frame, including each of Miami’s final four to help the Hurricanes log the 16-point victory.

Hayes, Motley and sophomore forward/center Emese Hof (season-high-tying 14 points), combined to score 45 points on 21-of-31 shooting (67.7 percent) from the field. In the past two games, both versus the Yellow Jackets, Hayes shot 17-of-25 with 40 points.

“Our shot chart tonight was high level; inside, outside,” Meier said. We rode Motley in the first half and then [senior guard] Jessica [Thomas] got hot. Then, Emese and Key became the combination. We went to [freshman guard/forward Sarah Mortensen, too]. So, it was a diverse shot chart. I think we will be tough to beat if we can hit shots like that.”

Miami finished 37-of-58 from the field, setting a new season high in field goal percentage at 63.8 percent. The 37 makes were one shy of a season best, while the 87 points were Miami’s fourth-most this year.

This is the second time the Hurricanes have scored 80-plus points in an ACC Tournament game, joining a 93-point outing in a win over NC State in 2011. This is also the ninth time in 2016-17 thet have registered 80-plus points, including the fifth time versus an ACC opponent.

The Hurricanes will now take on No. 8/12 Florida State, seeded second, as the Hurricanes make their third straight quarterfinal appearance

“Well, they obviously sat and watched us, so they have got the advantage there,” Meier said of the Seminoles. “But I think some special things happened within our team tonight, I think, in terms of being a real veteran, smart team making some really high-level adjustments. So we have that game under our belt. They are a tough out. They are a potential Final Four team, and we want to be there to, so let’s see what we’ve got tomorrow.”

Miami will face the Seminoles at 6 p.m., marking the second consecutive year the teams square off in the quarterfinals.

·         Miami’s last ACC Tournament victory over Georgia Tech was on March 4, 2005, in the first game it ever played in the event. The Hurricanes are now 15-13 overall against the Yellow Jackets, winning eight of the past 10 matchups, including each of the past four.

·         This was the first time since 2013 the Hurricanes played the same team in consecutive games. That year, Miami beat Virginia Tech the regular season finale and its first game of the ACC Tournament.

·         The eight points Miami conceded in the opening period were the fewest it has allowed in a quarter in postseason play. The prior mark was nine, set in the second round of the ACC Tournament last season against Pittsburgh (3/3/16).

·         Motley surpassed both 1,800 points and 3,750 minutes played as a Hurricane, Hof moved past 450 points in her career, Mortensen reached 50 rebounds at Miami and junior guard/forward Shaneese Bailey eclipsed 750 points as a collegian.