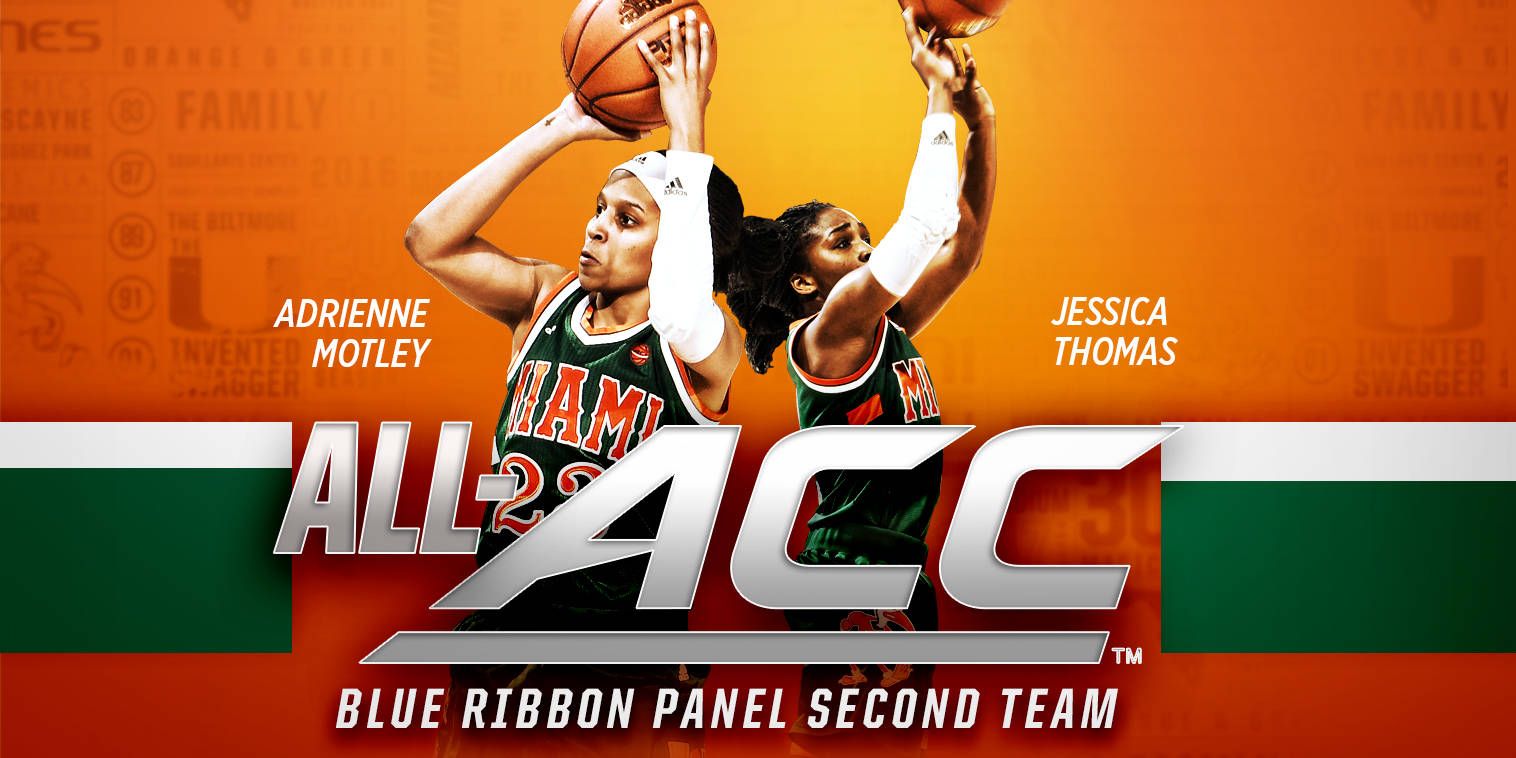 Senior guards Adrienne Motley and Jessica Thomas were both among the honorees, marking the first time since 2013 Miami had multiple players receive All-ACC recognition.

Hailing from Newport News, Va., Motley is the sixth player in program history to be a three-year all-conference player, as she was a First Team All-ACC pick as both a sophomore and junior. Motley is the third Hurricane to be a three-time All-ACC selection in program history, joining Shenise Johnson and Riquna Williams. She also made the ACC All-Freshman team in 2013-14.

“I am extremely proud of Adrienne. She is one of the most significant players in our program’s rich history,” Miami head coach Katie Meier said. “Adrienne has played every year with so much on her plate and responded every single time with amazing stats and consistency. She is so deserving of this fourth consecutive honor from the league and I could not be happier for her.”

Motley is averaging a team-best 13.9 points per game, including a 15.2 mark in ACC play and 17.3 over the final seven games of the regular season. Her 39.3 percent mark from 3-point range places her No. 10 in the conference. With 1,795 points in her career, Motley ranks second among active ACC players and sixth all-time at Miami.

A native of Gainesville, Fla., Thomas is the 26th Hurricane to garner all-conference distinction, including the ninth since Miami joined the ACC. The lone player on the team to start all 28 games, Thomas is averaging career highs in points (13.3) and assists (4.1) per game, with the latter ranking eighth in the ACC.

“I am so incredibly thrilled for Jessica. She is the fuel for our team and is the ultimate example for young girls to follow,” Meier said. “Jessica was told her size would hurt her chances of playing at this high level, but never let that stop her. She puts in so much effort and time to improve her game and this recognition is a wonderful reward for her hard work.”

Thomas has scored double-digit points in 23 of Miami’s 28 games, logging 20-plus four times and leading the Hurricanes in scoring on 10 occasions. Her career-best 78.9 free throw percentage ranks No. 11 in the ACC and her 1.48:1 assist-to-turnover ratio is No. 12 among ACC players.

Miami, ranked No. 16/16 with a 21-7 (10-6) record, is one of seven teams in the league with multiple All-ACC selections. The seventh-seeded Hurricanes begin ACC Tournament play Thursday at 6 p.m., against either Georgia Tech or Boston College in Conway, S.C.