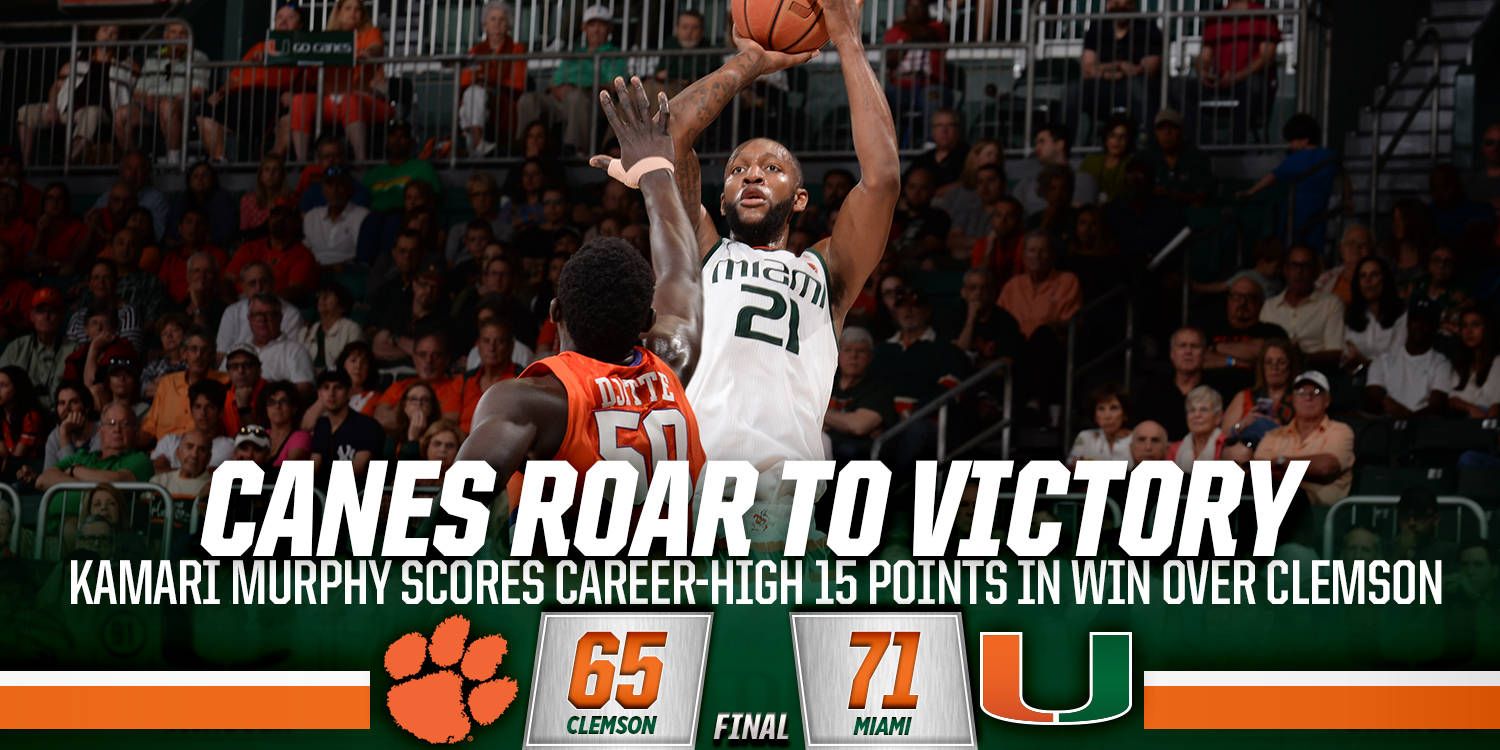 CORAL GABLES, Fla. – Senior Kamari Murphy has made three trips to the NCAA Tournament during his collegiate career and he would like nothing more than to make a fourth visit this upcoming March.

On Saturday, the Hurricane forward helped Miami take another big step to the NCAA Tournament as it posted a 71-65 victory over Clemson Saturday afternoon at the Watsco Center.

“Every game is crucial at this point,” Murphy said. “We’re not thinking too far ahead, but we do want to have a postseason. With guys out, our motto in the locker room has been to find a way.”

Murphy certainly found a way as he finished the game with a career-high 15 points and connected on 7-of-9 shots from the field as Miami improved to 13-2 at home.

“I think we understand that we have to play for each other now,” Murphy said. “We know the common goal and we know what we have to do to win. It just requires more effort from everybody.”

The Hurricanes got that effort and then some as four Miami players, including Murphy, scored in double figures. Fellow senior Davon Reed, sophomore Ebuka Izundu and sophomore Anthony Lawrence, Jr., finished with 14, 12 and 10 points, respectively.

“Part of the key for us is being able to hold people under 70 (points),” Head Coach Jim Larrañaga said. “If we can do that and do some good things offensively, then we have a good chance.”

Defensively, the Canes held their sixth ACC opponent to under 70 points at home. The Hurricanes also limited Clemson to just 17.6 percent from 3-point range.

“Nineteen assists, I like all of them,” Larrañaga said.

The noon start on Saturday in no way translated into a slow start for either team as the two squads combined to go 14-of-19 from the field over the game’s first seven minutes. In addition, no team led by more than three points during the opening stretch.

The back-and-forth battle would continue for the remainder of the first half, as no team would lead by more than four points. The Canes would go on to take a two-point advantage, heading into the locker room, leading 35-33. Miami outrebounded Clemson, 17-15 in the first stanza.

Izundu paced the Hurricanes with 11 first half points as he connected on 5-of-9 shots from the field.

Clemson clawed back to cut Miami’s lead to two at 48-46 with 11:11 to go, but the Canes responded thanks to a clutch 3-pointer from Reed and a fast break layup by Lawrence, Jr., to push their lead to seven (53-46) with under 10 minutes to go in the game.

Over the final eight minutes of the game, Miami once again withstood a number of Clemson runs, but never trailed during that stretch.

Freshman guard Bruce Brown helped seal the win as he hit a 3-pointer from the top of the key to give Miami a 67-61 lead with 1:34 to go. Clemson closed to within four with 15 seconds remaining, but it would get no closer.

Miami has a short turnaround before its Big Monday matchup with No. 14/15 Virginia on the road. Tipoff in Charlottesville is set for 7 p.m. and will be aired on ESPN.

Miami’s starters for the second-straight game were Bruce Brown, Davon Reed, Anthony Lawrence, Kamari Murphy and Ebuka Izundu. Miami is now 2-0 with those guys in the starting lineup.

With the win Miami is now 11-13 all-time against Clemson and 4-2 under Coach L. The Canes are 7-3 at home against the Tigers. The Canes have won five of the last seven matchups with Clemson, including the last four home matchups.

This season Miami is 17-1 overall and 8-1 in ACC play when scoring 70+ points. UM has scored fewer than 60 points in five of its eight losses.

Senior Kamari Murphy scored a career best 15 points, topping his previous best of 14 points against Wofford on Dec. 3, 2016. Murphy has scored double-digit points in three of the last four games. He also pulled down a team-high nine rebounds.

Sophomore Anthony Lawrence, Jr. who played point guard in high school, dished out five assists, topping his previous career high of four, which he last had against North Carolina this season. Lawrence, Jr., also swiped three steals against Clemson. He hit two shots from three, his seventh game this season with multiple makes from downtown.

Freshman Bruce Brown continued to be busy on the boards, grabbing five. He has grabbed at least four rebounds in 23 of 26 games, and has eight-or-more in seven outings. He added nine points and five assists for the Canes.

DJ Vasiljevic knocked down one shot from three, marking four straight games in which the freshman has hit from long distance. Vasiljevic also had three rebounds and one assist.

Junior guard Ja’Quan Newton was out for the game, while serving his three-game suspension for violating team rules. Newton will return to the court Feb 25 against Duke.

“First of all before the game we told the team how talented Clemson is offensively. They are averaging in the 80s. They have six or seven different guys that can score 20 or more. They have an NBA player in Jaron Blossomgame. They have a rotation of guards that make it very, very challenging on your defense. Part of the key for us, is being able to hold teams under 70. If we can do that, and again do some good things offensively, then we have a good chance.”

On the offensive production today…

“I was most pleased offensively with 19 assists and only seven turnovers. We shared the ball extremely well. Clemson is a team that leads the league in steals, and they got a couple of them, but not many. We had four guys in double figures, and another guy with nine. And everybody who played scored. So everybody is contributing at the offensive end. And if you look at the assist breakdown, you see that we are even getting assists from multiple players now. And the progress has been simply this; I think our upper classmen have played good, all year. I think our young guys, our freshmen and sophomores are gaining a lot of confidence and a lot of experience. And our veteran players will say, ‘Hey, let’s run something for Ebuka,’ because they are confident in him. On Thursday we watched some tape, it was on the whole team, which started with about five clips of Ebuka scoring on Louisville and Georgia Tech. And Kamari Murphy said, ‘What is this, the Ebuka Izundu highlight tape?’ Then it showed him (Murphy) rolling and getting a dunk, and then hitting a baseline jumper. Pretty soon everybody saw highlights of themselves.. It just shows that now we have multiple guys stepping up and helping us. A good example today is that we have a play call, called chin rip, and Dewan looked over at me and called it for himself. He wanted the ball, so we ran the play. That was the one where he drove baseline, reversed it to the other side and banked it in. Very hard drive because that defender is very big, very strong and did not make it easy on him. And he still laid it in. What we have been doing with the big guys during individual work, after months of doing it, is now starting to show up under game conditions. Before, you could see it in practice from time to time, but it was inconsistent and now you are seeing it pretty regularly on the court.”

“Last year he could do this. He can score; Kamari said it. He can make shots. The issue with him was at the defensive end, because he was fouling so much we couldn’t keep him in the game. Fouling is like a four letter word in my language. If you foul, you are putting the other team on the foul line early, getting the other team to the one-and-one. You give them a chance to score without us defending. He has battled that, but now he is more comfortbale. We have added more zone. At Louisville we started zone, Georgia Tech we started zone and today we started zone. And we have kept Ebuka out of foul trouble, and he has kept himself out of foul trouble. It makes a big difference when he can play the whole second half knowing, ‘Hey I am not in foul trouble.’ Then he has Dewan who is playing very, very well. Did you see him defend Blossomgame on that one play? It was beautiful. Blossomgame tried to beat the young guy and just take him with his straight line drive. Dewan shut it off. We are making a lot of progress and the assist of the night, there were two of them. One, Anthony Lawrence, Jr. tossing it over his head to Murphy. Then DJ going the length of the court and dropping it off to Lawrence. Against Louisville, the defender blocked it from behind, but this time DJ was really sharp in reading the defense and just dumping it off for the layup.”

“Congrats to Miami. I thought their kids played very well today. They were very efficient on offense with 19 assists and seven turnovers.  I thought they were running their offense with very good pace. Obviously, in the second half, we did not make a three and we missed half of our free throws. So, it is hard when you are down a couple, to come back in that situation. I thought both teams played really hard and it was a very physical, competitive game. I thought the Miami kids made a couple of plays at the end. Certainly, the big three by Bruce Brown. And I thought Davon Reed made a big bucket. Kamari Murphy was very good today, and made some mid-range jump shots that he sometimes makes and sometimes does not. I thought he was very good. Again, their assist-to-turnover ratio was a factor, as well as our inability to make threes and free throws.”

On the games effect on the teams’ tournament chances…

“That is not for me to say. It doesn’t matter what I think or what happens. We lost a game to a top-50 RPI team. I do not think it does much. We still have several games to play. We have done a lot of good things, obviously struggled a little bit in the league. We also have played a lot of road games. We have three more at home and one more at Virginia Tech, and plenty of opportunities with that and the ACC Tournament to do what we need to do.

On the differences between the start of both halves…

“I didn’t like the way the game started, to be honest with you. It felt like both teams were scoring every possession, or three out of every four possessions. Some of that was good execution. I thought both teams executed. They actually started in zone, and we scored on their zone. They went through our man and scored against us. Then in the second half, as you mentioned, we did not do as well coming out of the gate and that is where they got a little bit of separation. We obviously battled back and played better, got it down to a one possession. Again, we just could not quite make enough plays, defensively or offensively. In terms of making both free throws, making a big three, a timely shot. We just didn’t get any momentum type plays like that in the second half.”