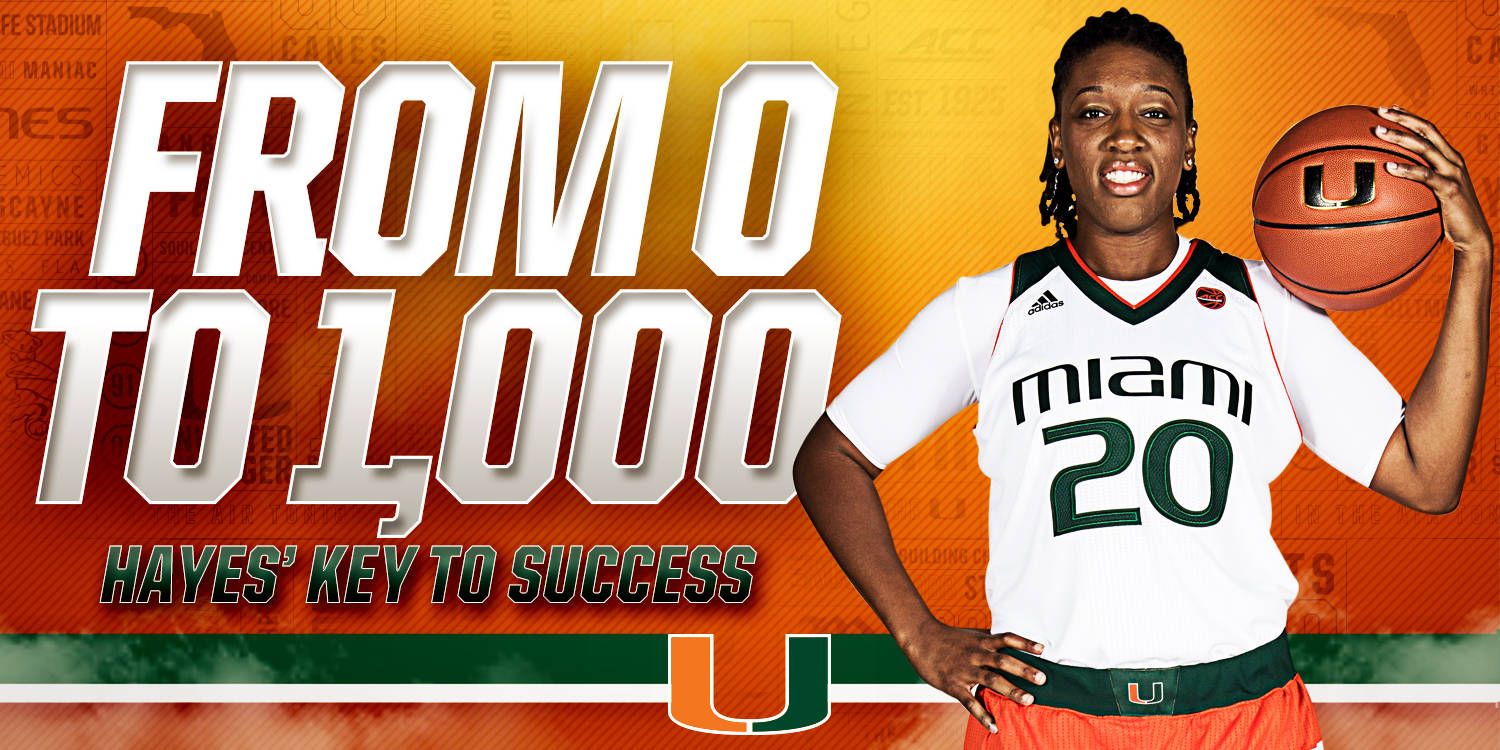 CORAL GABLES, Fla. –Five years ago, Keyona Hayes came to the University of Miami with hoop dreams and shy demeanor.

The Marietta, Ga., native arrived on campus as one of the best high school forwards in the nation and hoped to deliver on the court and exceed expectations. The city of Coral Gables has watched her grow as a person and as a player since the start of her career, which is now nearing its end.

Now a redshirt senior, Hayes’ story as a Hurricane began before she even knew it, when Miami head coach Katie Meier saw her at a tournament in Virginia while she was still in high school.

“We had Keyona on our radar. We had seen her a little bit, but I vividly remember what court she was on,” Meier said.  “You make a depth chart when you come out of that tournament about who’s your number one and I [told her coaches], ‘That kid is unbelievable.’ She was so versatile, so powerful, so good with the ball and so fluid.”

Meier knew Hayes’ playing style would fit perfectly into her program so she went after her, and sure enough, the frontcourt standout became a Hurricane.

“Coming in to the University of Miami, there was already a lot of talent here,” Hayes said, citing Morgan Stroman, Suriya McGuire, Shawnice “Pepper” Wilson and Stefanie Yderstrom, all of whom have gone to play professionally. “. . . It was fun coming in with a lot of talent and upperclassmen who were wise and good people.”

Like the other freshman, Hayes had to earn her spot on the team. While she came in a star, she found herself being a small fish in a large pond and wishes she had not come in with any sort of nonchalant attitude.

Hayes found her groove in her sophomore season when she started in 28 of 31 games and led the team in double-doubles.

Unfortunately, at the start of her junior year, Hayes suffered a right ankle injury that kept her out for the remainder of the season. She kept her composure and her passion as she rehabbed her ankle and watched as her team competed without her.

Hayes had the support of her coaches, teammates, family and team’s sports psychologist as she worked day in and day out to overcome her injury.

Although her injury came at a rough time, Meier always valued Hayes’ role on the team and knew she would get her spot back when she was fully healthy.

“She’s pretty much had a spot since she’s arrived on campus. She’s very, very talented,” Meier said.  “She does work, but she’s always been such an important piece of whatever game plan we’re putting together. When she’s been healthy, she’s been a very significant player and has been since she showed up.”

When she came back for her redshirt junior season, Hayes was superb on the court. She played in all 33 games and started in 31 of them. She scored double digits 13 times, had one double-double and made it in the record books with the eighth best single-season field goal percentage in program history. She made the bounce-back from her injury look effortless and she awards her success that season to her hard work.

Hayes has accomplished a lot during her time at the University of Miami. The Hurricanes have been to the NCAA Tournament in three of her four years and she attributes that to the talent of the team, as well as the love they have for the game.

Hayes blew past both the 1,000 point-barrier and the 700-rebound mark by posting 14 points and a season-high 13 rebounds in a 63-52 win over Virginia Feb. 10 at the Watsco Center. She is one of just nine players in program history to reach both of those milestones.

Hayes and her teammates, Jessica Thomas and Adrienne Motley, create the second trio of teammates in program history to each have over 1,000 points at the same time.

By reaching quadruple digits, Hayes will have her name on the wall among some of the finest players in Miami history. Her 1,000 points are a symbol of her hard work and achievement under Meier.

Meier attributes Hayes’ accomplishments to her humble brilliance that resembles how she plays on the court.

“She is so hyper intelligent and she wants to keep that a secret, but that kid is brilliant,” Meier said.  “She can figure anything out that she ever needs to figure out. She’s in–the-clouds brilliant and it helps her be strategic in how she plays.”

After all of her accomplishments on the court, one can only wonder what lies ahead for Keyona Hayes. Well, she still carries the same hoop dreams that she had when she came in for her freshman year. When she graduates this spring, she hopes to go on and play in the WNBA or overseas.

However, this basketball star has some other things she would like to accomplish, such as learning how to play the piano and channeling her inner Picasso. As for her life after basketball, Hayes hopes to work with technology or in the health field.

The girl who was once a timid freshman is now one of the best players in school history. Throughout her time at Miami, she gained the support of many fans and fellow students, immersed herself in academics, overcame injury and put her name in the record books.

Keyona Hayes knows the key to success, and the University of Miami can relish in all of her accomplishments when her name goes up on that coveted wall.