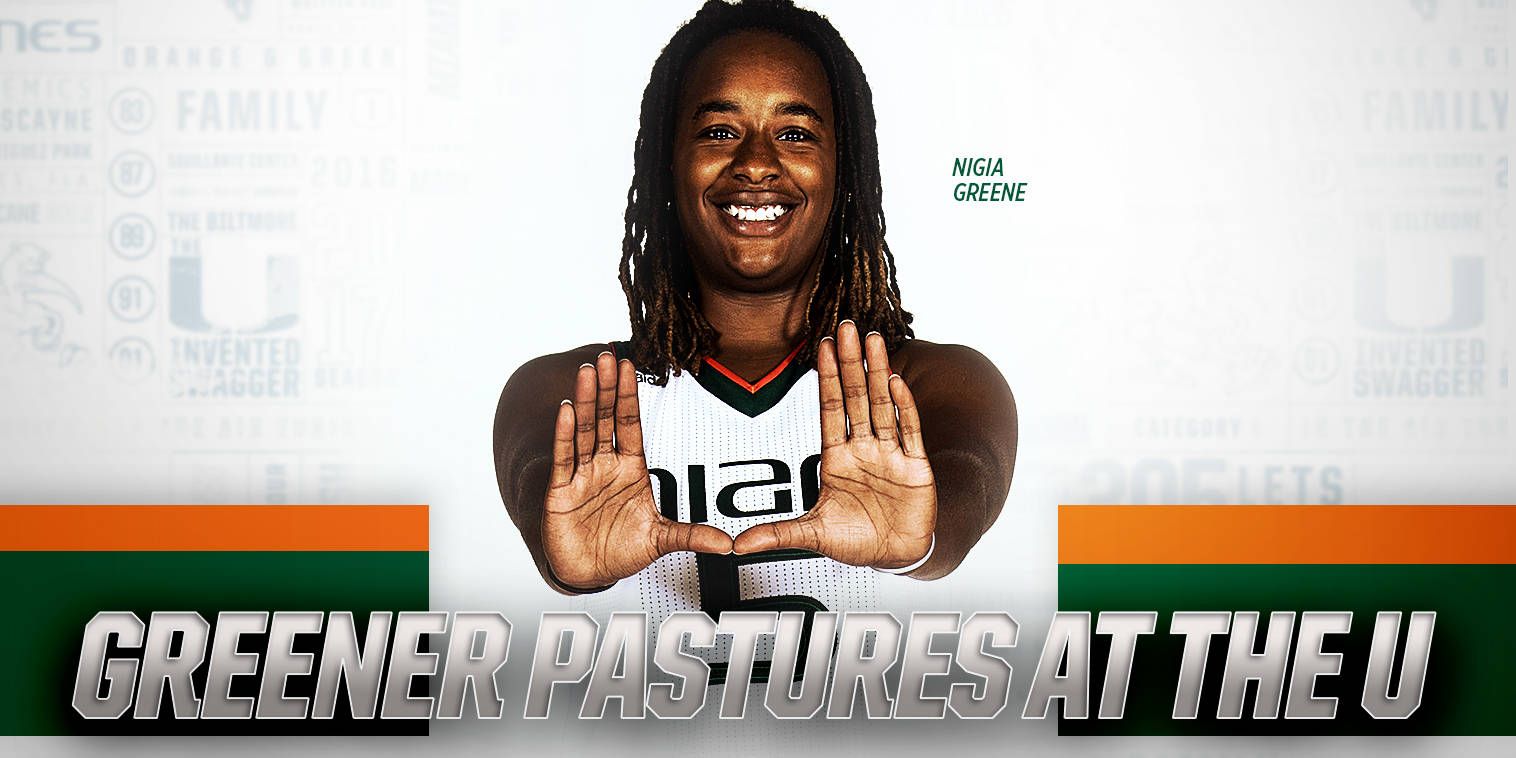 Greener Pastures at The U

CORAL GABLES, Fla. –Making the transition from high school to college is one of the biggest life-altering events for any future student-athlete.

Moving away from home, making new friends, playing on a new team, living in a new area and adjusting to the college life style can be a difficult task for anyone.

Greene, a soft-spoken yet talented basketball player from Atlanta’s St. Francis High School, began her collegiate experience in the fall of 2013. She was going through all the normal highs and lows of a first-year student-athlete until her collegiate career was turned upside down after she tore her anterior cruciate ligament (ACL) in her right knee and was forced to miss her entire freshman season.

“She has a real deep deep heart and to see her struggle was just hard because you could just see it on her face – she doesn’t share a lot – but you could just see the daily conversations that she was having with herself,” head coach Katie Meier said. “On the surface, she just doesn’t want to be a problem. She never wants it to be all about her.”

For some first-year student-athletes, the blow of tearing an ACL and being forced to miss her entire first season might have been enough to force a transfer back to closer to home.

However, Greene had been down this road before.

Heading into her junior season of high school, Greene tore the ACL in her left knee and was forced to miss the entire season.

“I knew it was a pretty bad injury and I knew it took a while to get back from it,” Greene said of learning about her first ACL injury. “I knew it was a long process and I didn’t think it would happen to me. It’s an uncomfortable feeling. It doesn’t disappear.”

As prospective colleges learned of Greene’s injury in high school, some began to look else where for a future guard, but Miami remained committed.

Greene came out of high school rated as a four-star recruit by ESPN and was ranked as the ninth-best player at her position and the No. 41 overall prospect. She finished her senior season by averaging 18.0 points per game and led St. Francis to a 25-6 record.

“Miami was one of the only schools that really kept reaching out to me and kept letting me know that they still believed in me and that they still wanted me to come here,” Greene said. “When I came on my visit, that’s when I realized that this was where I needed to be.”

To Greene, Miami had it all – a beautiful campus, smaller classes, tropical weather, but most of all, Meier provided her student-athletes with a strong sense of family.

“Coach Meier called me and told me to keep my head up and to keep working hard and to just stay focused on the bigger picture. Not every student-athlete gets that type of call,” Greene said. “It made me feel like I was part of a family because she was one of the first people that called me and it made me feel like this was home. I felt like if I ever needed anything I had a family here that would be able to help me out.

“Talking to Coach Meier after I got injured my freshman year and having her telling me that she understands and that she is with me every step of the way meant a lot.”

Since suffering her second ACL injury, Greene has battled through several nagging injuries and has played in 71 games.

“Coach Meier cares about you as a person and not just as a player,” Greene said. “She wants the best for you at the end of the day. She wants you to be successful in whatever you do.”

This season, Greene has seen action in 22 of 23 contests and is averaging just over 14 minutes per game.

As the 5-foot-10-inch guard comes down the home stretch of her collegiate career, Greene believes that hard work pays off.

Greene hopes that the hard work her and her teammates have put in over the past four years translates into a dream ending of winning an ACC Tournament title.

“I think our depth is something that few teams in the ACC have,” Greene said. “We are a very deep team. If we can put it all together, I definitely think we could win the ACC title. There is no doubt in my mind.