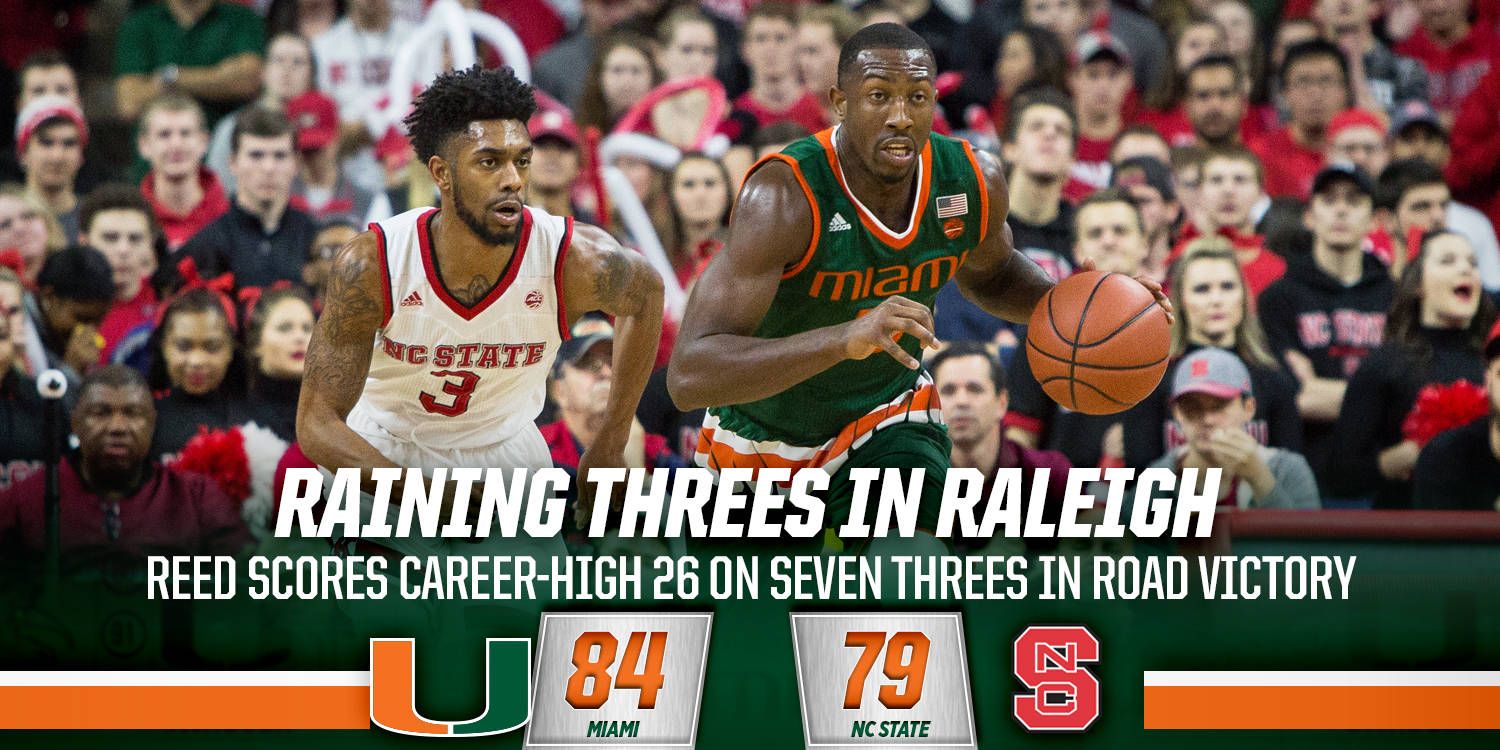 RALEIGH, N.C. – On a day of personal bests, led behind seven made 3-pointers and 26 points by senior guard Davon Reed, the University of Miami men’s basketball team edged out NC State, 84-79.

Looking for the series sweep, the Hurricanes fell behind early, trailing 21-11 at the halfway mark of the first half.

However, the Canes clawed their way back to even the score at 30 apiece, with less than five minutes to go in the half.

With 8:30 left to play in the game, Miami trailed NC State, 61-58. Led by back-to-back 3-pointers, from sophomore Anthony Lawrence Jr. and Reed, the Hurricanes took the 64-61 lead that they refused to give up.

As Smith responded with a three of his own, freshman guard Bruce Brown knocked down his own shot from beyond the arc, while junior point guard Ja’Quan Newton nailed a jumper, to give the Canes a 69-64 lead.

With a pair of free throws, with 4:07 left to play, sophomore center Ebuka Izundu surpassed his career-high, hitting his 15th and 16th points of the game.

In the closing 30 seconds of the game, Lawrence set his own career high with a couple made free throws to give him 19 for the game.

Up next for the Hurricanes, a return to the Watsco Center against Virginia Tech, Feb. 8 at 9 p.m.
To keep up with the University of Miami men’s basketball team on social media, follow @CanesHoops on Twitter, Instagram and Facebook.

Senior guard Davon Reed finished the evening with a career-high 26 points and seven made 3-pointers, to go along with seven rebounds, three assists and a steal.

Sophomore center Ebuka Izundu also reached a career-high, scoring 16 points for the Canes, to go along with six rebounds and a block.

Miami improves to 10-12 all-time against NC State, and 3-7 when playing at PNC Arena. Head Coach Jim Larrañaga is 6-5 at Miami against the Wolfpack, and the Canes have won two consecutive matchups.

Junior point guard Ja’Quan Newton finished the game with 13 points, five assists, and three rebounds. Shooting 3-of-4 from the free throw line, the Philadelphia native ended his streak of 19 consecutive free throws made.

UM has now made at least seven shots from long range in 117 of Larrañaga’s 197 games at UM. The Canes are 91-26 when making at least seven from 3-point range. This season, Miami is 9-3 when hitting seven from deep.