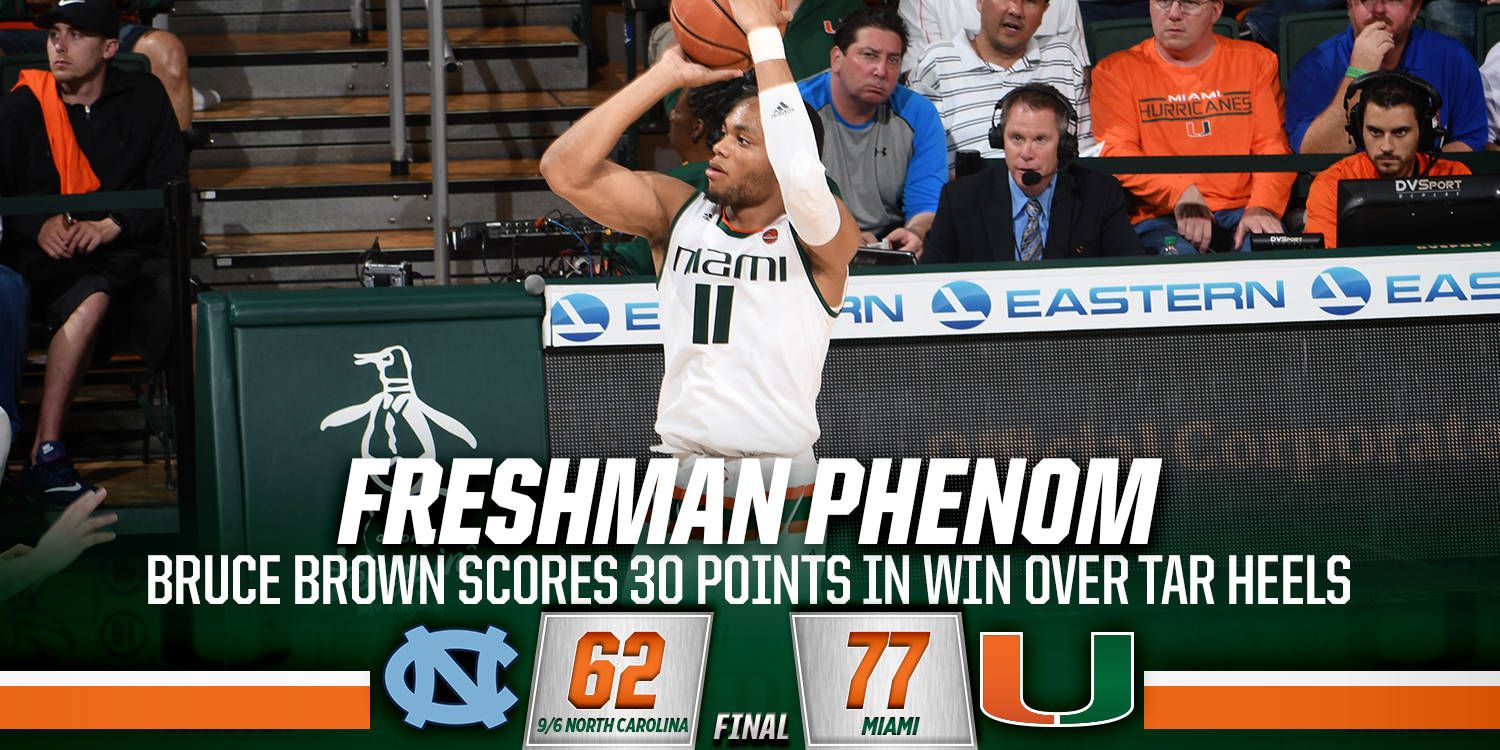 CORAL GABLES, Fla. – If Miami guard Bruce Brown was supposed to be nervous for his first career matchup against top 10-ranked North Carolina, the Boston native apparently never got the memo.

Brown was a one-man wrecking crew in the Hurricanes’ 77-62 victory over North Carolina Saturday afternoon at the Watsco Center. He finished the game with 30 points, connecting on 8-of-11 shots from the field as he helped propel the Hurricanes to a 77-62 victory. Brown’s 30-point performance was the most by a Miami freshman since UM joined the ACC in 2004-05.

The win was Miami’s fifth in its last seven meetings against the Tar Heels. The win also was the Hurricanes’ second-largest victory over the Tar Heels and their largest since 2013.

Teammates Ja’Quan Newton and Davon Reed also chipped in as they scored in double figures, finishing with 18 and 14 points, respectively.

The Hurricanes defeated North Carolina in nearly every statistical category including rebounds (41-36) and points in the paint (28-22). UNC entered the game as the No. 1 rebounding team in the nation, averaging 45.9 rebounds per game. The Hurricanes were also strong defensively as they forced the Tar Heels into 14 turnovers, blocked six shots and held UNC to a season-low 21 made field goals.

North Carolina jumped out to an early lead in the first half as it outscored Miami 11-2 with 16:28 to go until halftime.

The Hurricanes responded in a big way over the next seven minutes as they went on a 24-5 run to take a 26-16 lead with 9:25 remaining until the break. Newton keyed the Hurricanes run as he scored six points during the stretch. Miami also was a perfect 3-for-3 from long range. Anthony Lawrence, Reed and Brown all connected from 3-point range.

Miami closed the half with a 10-4 spurt to take a 39-22 lead into the locker room. The Hurricanes were strong inside and in transition over the first 20 minutes of play as they held a 16-6 lead in points in the paint and an 8-0 advantage in fast break points.

Newton scored a game-high 14 points in the first half. Brown also finished in double figures as he scored 11 points, going 2-of-2 from the field and was a perfect 5-for-5 from the free throw line.

The Hurricanes came out firing in the second half as they opened up a 22-point lead with 14 minutes to go in the game. UNC trimmed Miami’s lead to 11 on two separate occasions, but the Tar Heels would get no closer as the Hurricanes captured their second straight win.

Miami returns to action on Wednesday as it welcomes No. 6/8 Florida State to the Watsco Center. Tipoff is set for 8 p.m. and will be aired on the ACC Network.

In addition to setting a new individual career-high and team-high for the season, Brown scored the most points for a freshman since Miami joined the ACC in 2004-05. Durand Scott previously held the record with 29 points against North Carolina on March 2, 2010.

Reaching the 30-point mark, the Boston native is the first Hurricane since Sheldon McClellan (31), Jan. 25, 2014 against Charlotte, to hit the mark.

Brown has also grabbed at least four rebounds in 19 of 20 games and has at least two assists in 15 contests.

Miami improved to 7-20 all-time against North Carolina, and 3-8 when hosting the Tar Heels. Head Coach Jim Larrañaga is 5-4 at Miami against UNC, and the Canes have won five of the last seven matchups.

In the opening half, the Hurricanes trailed the Tar Heels, 11-2, at the 16:28 minute mark. Following three consecutive 3-pointers by sophomore guard Anthony Lawrence Jr., senior guard Davon Reed and Brown, Miami finished the half on a 37-11 run.

Defensively, Miami held UNC to their lowest point total (22) in a half this season. UNC’s previous low was 29, which was recorded twice against both Wisconsin and Indiana. The Hurricanes were the first team since Duke, on March 9, 2013, to lead the Tar Heels by 15 or more points heading into the locker room.

Miami outrebounded the No. 1 team in the NCAA, 41-36. The Tar Heels entered the game averaging 45.9 rebounds per game.

With only 62 points scored this afternoon, Miami held the No. 4 team in the NCAA in offensive scoring per game (89.4) to their lowest point total of the season. UNC’s original season low was 63 against Georgia Tech, Dec. 31, 2016.

For the first time since falling to Georgia Tech, 75-63, only two players reached double-digits in scoring for UNC.

With seven made 3-pointers this evening, the Hurricanes continued their stretch of hitting six-or-more shots from beyond the arc in every ACC game, after doing so in only eight of 12 non-conference outings.

UM has now made at least seven shots from long range in 116 of Larrañaga’s 195 games at UM. The Canes are 90-26 when making at least seven from 3-point range. This season, Miami is 8-3 when hitting seven from deep.

Reed scored 14 points to go along with tying a season high in rebounds (7).

Yesterday we had a handout for the players to read and review and then I sent that same handout in a text message to everybody and on the handout was seven things we needed to do on defense and seven things we needed to do on offense as part of the game plan. When you face a team as good as North Carolina is at running the floor and getting layups and open shots early in their possession, the first thing you have to do is get back and set your defense. And you saw how good they are at that in the first four minutes because we were down, I don’t know, was it 11-2? So we did not have zone in the game plan, like Ja’Quan said, but there are times teams will slow down and play a little bit more patiently against the zone. So my coaching staff decided to at least try to slow them down in the zone for a few possessions, but when it worked we decided we would stick with it to see how they attacked. Obviously our defense, holding them to I believe 22 points in the first half, is probably the best half of defense we’ve played all season. The point I’m trying to make is if you don’t get back on Carolina they’re going to score at will and from a defensive standpoint, everything we did in the zone was what the game plan called for but it was planned to be out of our man-to-man. Also, we had seven things we needed to do offensively and we did every one from the 16-minute mark on in the first half. I told the team afterwards that I think we’ve played three and only three really complete games since the ACC season started and that was NC State, Notre Dame and today. Some of the other games we played very well for a half, or three quarters of a game, but today I was very, very pleased with the effort and execution.

He’s just a loveable kid. If you get to know Bruce he’s fun to be around, he’s a great teammate and a great friend. High social, smiles all the time, practices hard every day, wants to get better, worked on his game, plays defense. I mean everything you would want from a player, Bruce Brown delivers. It’s a game, it really is and with a player like him, he looks at it as fun.

It’s really just one game on a Saturday in front of a great crowd. Didn’t you think the crowd was really

into it, and enjoyed it, and made it exciting? And when the crowd is really into it, it does create an energy in the building that players thrive on. That’s why home court advantage is so important. What time do we play on Wednesday? 8 o’clock? I don’t want to tell the guys to tell the students who have night class to cut, but maybe they can come for second half. We would really like to see that kind of turnout because this is their school, we are their program and I hope they’ll take great pride in it. If they can energize us to win games like this, then where we are right now as a team and a program can be elevated to a much higher place. We are already selling out all of our season tickets, it’s the second year in a row. But for us to grow and to develop the tradition it’s really about the students and the community staying behind the team and keep supporting us so we can get better and better. I know those guys, they have great respect for that kind of support. They know we haven’t always had that. You know we haven’t always had that.

“There’s not a lot to say, it was a big time kicking of our rear ends is what it was. They were much more aggressive: Aggressive going after the boards, aggressive going after loose balls. When I say aggressive, that’s not intended to mean any way dirty. They were quicker to every loose ball. The first two or three minutes we thought it was going to be easy and then they hit us right in the mouth and did that for about 40 minutes.”

“He was tremendous. We couldn’t keep him from getting to the basket and when we backed off of him, he made his threes.”

On if they expected Miami to play zone…

On if his team was rushing their shots…

“I feel like we rushed every shot after the first three to four possessions and that’s because we never had a chance to get the ball inside, because as I said, the big guys weren’t moving and when they were open, they weren’t doing a good job to get the ball inside. Just because somebody plays zone doesn’t mean you have to throw up a 3-pointer every time or wait until the late clock.”