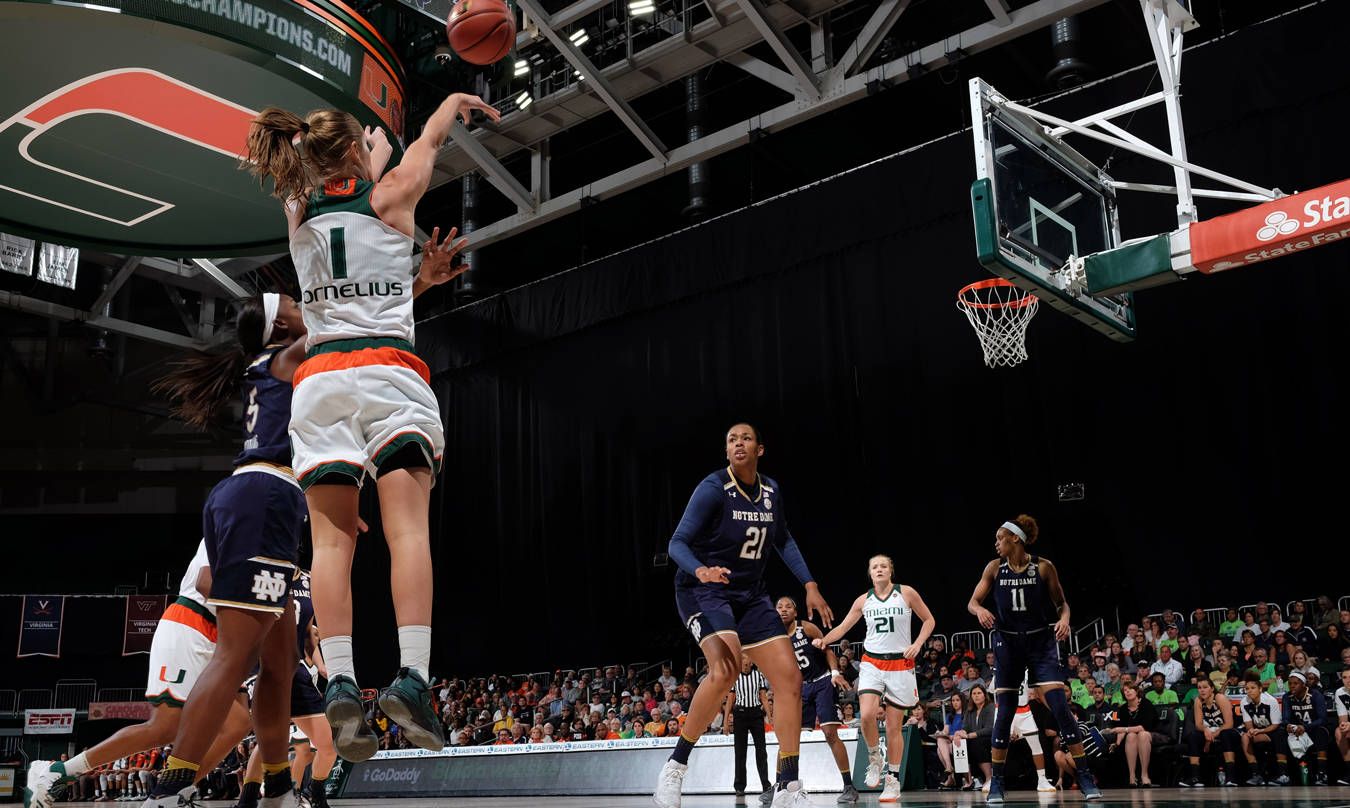 CORAL GABLES, Fla. – The University of Miami women’s basketball team led No. 7/6 Notre Dame in the third period Sunday afternoon at the Watsco Center, but the Fighting Irish stormed back for a 67-55 victory.

In a game televised on ESPN2, No. 14/14 Miami (13-3, 2-2 ACC) was led by a co-game-high 15 points from senior guard Jessica Thomas in the defeat against the Associated Press’ preseason top-ranked team in the country.

“They had more hustle plays. Nothing was flowing for either team,” Miami head coach Katie Meier said. “Credit to the assistant coaches with the prep . . . As ugly as that looked, there was some unbelievable effort, defensively. There was some high-level prep and scouting to make people uncomfortable. They were uncomfortable and we were uncomfortable, the whole game.”

Miami pulled even for the first time with 6:11 left in the second period when Thomas connected on her second 3-pointer of the game, but the Fighting Irish countered with a 7-0 run.

Miami answered right back with a 10-4 run to end the half that was capped by a 3-pointer by senior guard Adrienne Motley with three seconds on the clock, and trailed by just one, 30-29, through 20 minutes.

The Hurricanes’ co-captains, Thomas (nine) and Motley (12), combined for 21 points in a first half during which Miami forced 14 turnovers. Notre Dame junior forward Brianna Turner, an AP Preseason First Team All-American, was held scoreless in the opening half.

Miami took its first lead of the game just 61 seconds in to the second half when Motley made a pair of free throws to put the Hurricanes in front, 33-32. Notre Dame then surged back in front and led, 51-44, entering the final session.

The Hurricanes were unable to pull any closer in the fourth period and the Fighting Irish earned the 12-point win, their third-smallest margin of victory this season.

In addition to Thomas, both Motley (14) and sophomore forward/center Emese Hof (11) finished with double-digit points. Hof also tied a season best and led the Hurricanes with six rebounds in a season-high 26 minutes.

The Hurricanes held Turner to a season-low-tying seven points, while fellow senior guard Lindsay Allen, a fellow Preseason All-ACC pick, also had seven points, tied for her third-fewest in a game this year.

“We worked really hard on the defensive game plan and maybe that affected our offense,” Meier said. “. . . If you are a fan of defense, that was a great game.”

Up next for the Hurricanes is a matchup with No. 18/18 Virginia Tech, the ACC’s lone undefeated team, Wednesday at 7 p.m., at the Watsco Center.

·         Sunday’s game was played two years to the day of Miami’s 78-63 victory over fourth-ranked Notre Dame, the first of just two conference losses the Fighting Irish have suffered in their three-plus years in the ACC.