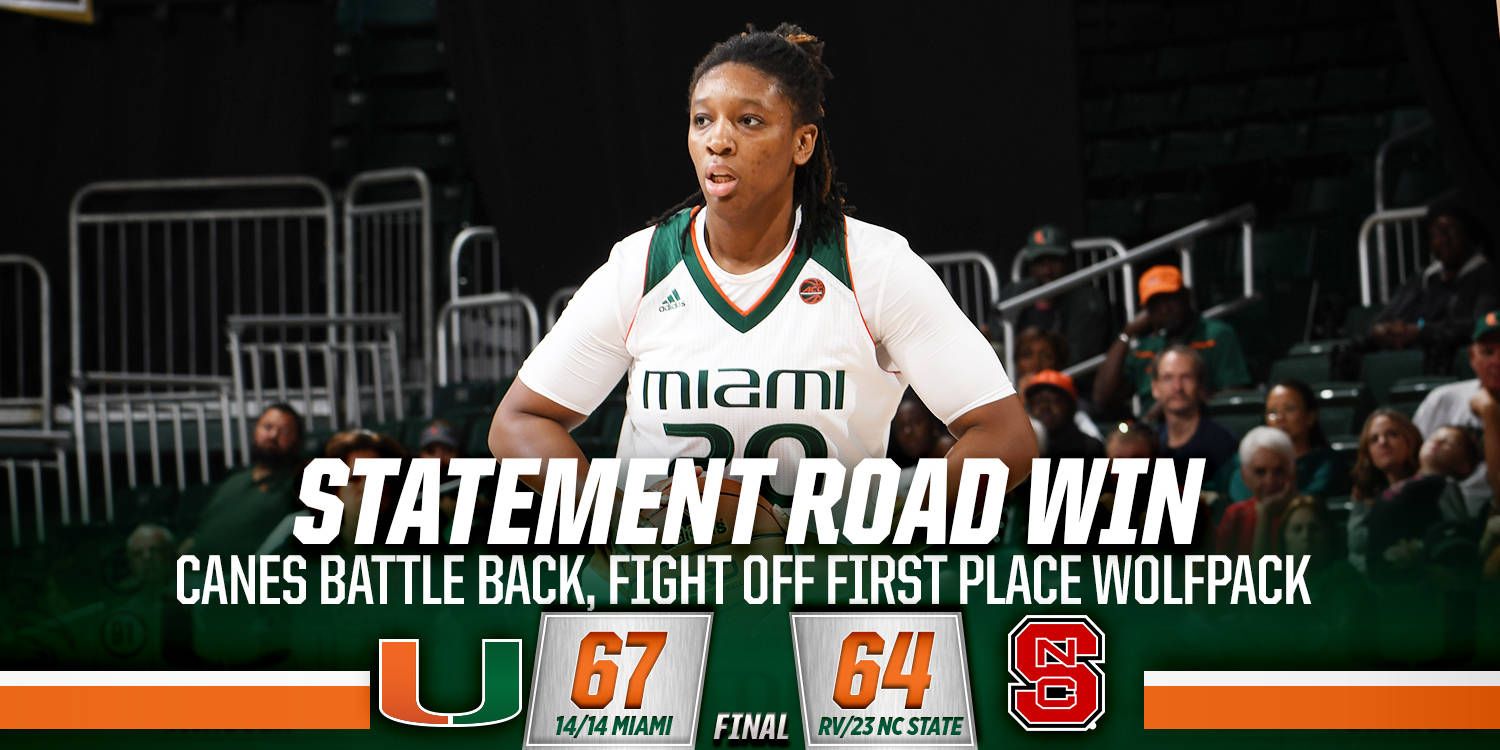 RALEIGH, N.C. – For the second time in three opportunities this season, the University of Miami women’s basketball team went on the road and defeated a top-25 opponent.

Redshirt senior forward Keyona Hayes logged a double-double with game highs in points (18) and rebounds (10) to help the Hurricanes take down a Wolfpack team that was coming off back-to-back wins over top-six teams to open ACC play.

NC State (12-4, 2-1 ACC) raced out to a 14-point lead in the first period after making 10 of its first 14 shots from the field, while Miami made just three of its first 15. Senior guard Adrienne Motley scored the final four points of the opening frame and Miami trailed by 10, 23-13, through 10 minutes of play.

The Hurricanes scored the first nine points of the second period, including Motley connecting on a pair of 3-pointers, to extend their run to 13-0 and pull within one point, 23-22. Miami took its first lead of the game, 26-25, with 5:33 left in the second quarter on a layup by sophomore guard Laura Cornelius.

The Hurricanes pushed their run all the way to 23-3 over a span of eight minutes and 17 seconds, taking a 32-26 edge with 2:41 remaining before the intermission.

“We were able to score, so we could extend our defense a bit,” Meier said of what changed in the second period. “That cut into their ability to run all of their really complicated sets. I think that helped a lot.”

The Hurricanes picked up after the break right where they left off, scoring the first four points of the second half to give them a prolonged 31-9 run and a 40-32 advantage, their then-largest lead of the night. NC State managed to trim its deficit to two, but Miami took a six-point edge, 50-44, into the final quarter.

Miami pushed its lead to 11 points twice in the fourth period, but the second time NC State responded with a 12-1 run, including scoring nine straight points, to even the score at 62 with 1:43 to go. Cornelius answered with a fantastic play to score at the rim to give the Hurricanes a lead they would not relinquish and Motley made a pair of free throws with 6.4 seconds left to help seal the win.

“We weren’t going to lose. I could see on our faces that we just were not going to lose,” Meier said of her team’s strong finish. “If NC State was going to go and beat us, that would have been one thing. We were making some mistakes, but we never got to down about it. We just knew when there were seconds left on the clock and a chance to make a play, we did.”

Along with Hayes’ double-double, Motley finished with 16 points, while Cornelius and senior guard Jessica Thomas each registered nine points and a co-game-high five assists.

The Hurricanes finished the game with a 41-31 edge in rebounding and a 15-7 advantage in bench points, the 13th time in 15 games their bench outscored that of their opponent. NC State never re-took the lead from Miami after the Hurricanes went ahead in the second period.

Miami will now return home to play No. 7/6 Notre Dame Sunday at 3 p.m., on ESPN2 at the Watsco Center in Coral Gables, Fla.