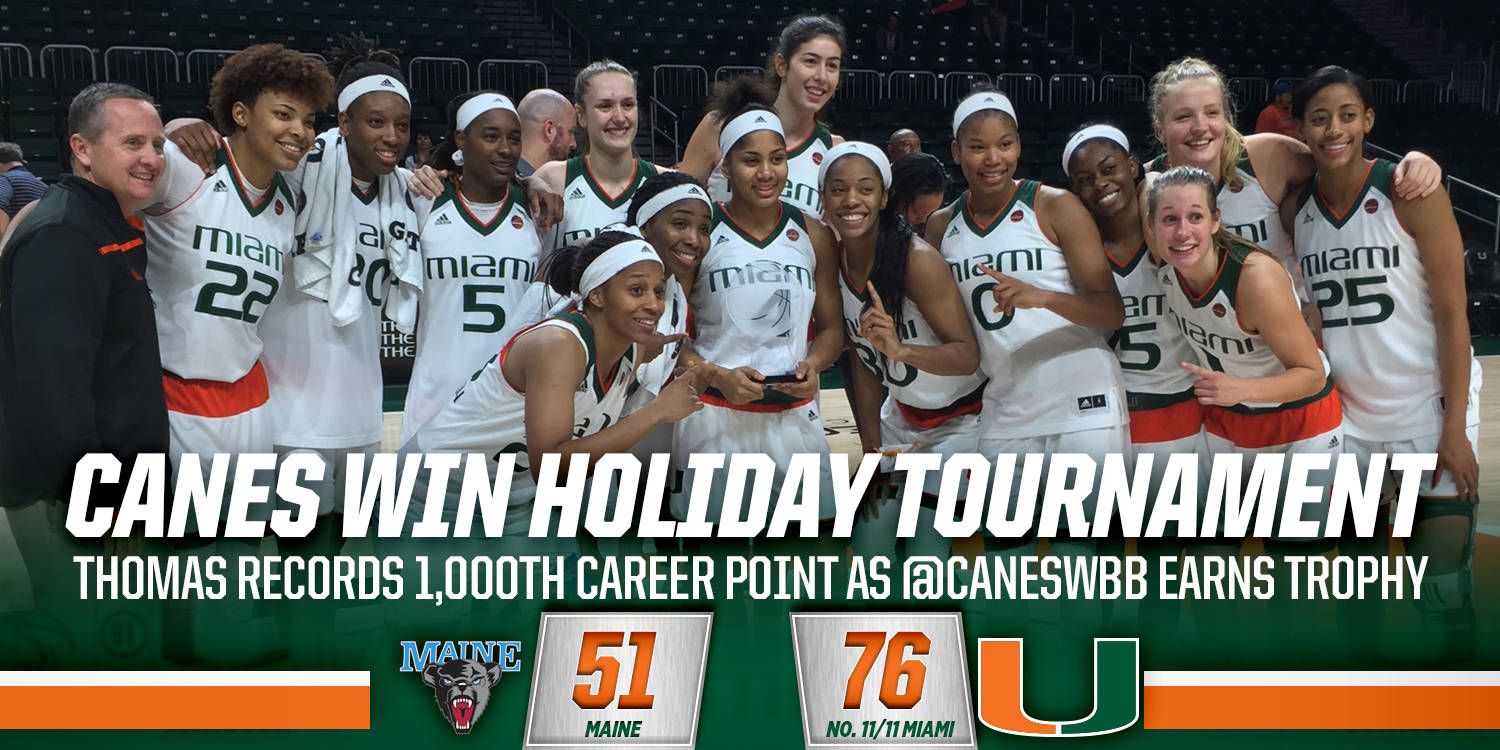 Jessica Thomas reached 1,000 points as a collegian and also recorded a season-high-tying five rebounds and a career-high-tying seven assists, while committing zero turnovers. Fellow senior guard and co-captain Adrienne Motley led all scorers with 21 points on 8-of-9 shooting to help No. 11/11 Miami (11-1) earn its 11th win in a row.

“I thought we had great balance. Motley was in a zone, so she is so easy to call for when she is hitting from midrange,” Miami head coach Katie Meier said. “. . . I thought that our offensive rebounding was spectacular. Forty points in the paint—we needed to establish that [down low].”

The Hurricanes took a 21-14 lead through one period of play, led by nine points by Motley, who was 4-of-4 from the field in the first 10 minutes.

Motley, the Miami Holiday Tournament MVP, continued her stellar play in the second period and entered the half with 16 points, shooting 6-of-6 from the floor and 2-of-2 both from 3-point range and the free throw line.

Miami built its edge to as many as 16 points in the first half, but Maine (7-6) senior guard Sigi Koizar hit a deep shot at the buzzer to make it a 41-28 game at the break.

After scoring 20-plus points in each of the first two periods, the Hurricanes notched 13 in the third. However, they also limited Maine to just 13, retaining their 13-point lead with the score 54-41 entering the final frame.

With 6:39 left in the fourth quarter, Thomas knocked down a jump shot to make her the 25th player in program history with 1,000 points.

“She has been the heart and soul, she has been the motor and she is the fuel [of our team],” Meier said of Thomas. “In a game where she has her 1,000th point, she has seven assists and zero turnovers. I had to scream at her to get that 1,000th point because she was sharing the ball so much. She is just a special kid. It was a special moment and I am really happy to be a part of it.”

Miami pushed its advantage to as many as 27 points in the last period before earning the 25-point victory, its seventh win by 20-plus this season.

Miami had a 40-10 edge over the Black Bears on points in the paint and outrebounded Maine by 17, 40-23, including grabbing more offensive rebounds (15) than Maine had defensive rebounds (14). The Hurricanes finished the game shooting 51.7 percent (31-of-60), its best mark of the season.

“Twelve games, 12 completely different preps; it was a very diverse schedule,” Meier said of Miami’s non-conference showing. “To end it with a team like Maine who was so disciplined, so smart and shares the ball well [was good]. That was a completely different prep than, say, St. John’s or Coppin State. The non-conference road wins, we have to ride those, but if they don’t turn into ACC road wins, it is not going to matter.”

Miami will open ACC action Dec. 29 when it faces seventh-ranked Florida State at 7 p.m., at the Watsco Center.

·         The Hurricanes have now finished non-conference play with just one loss for the second straight season and the third time in the last seven years.