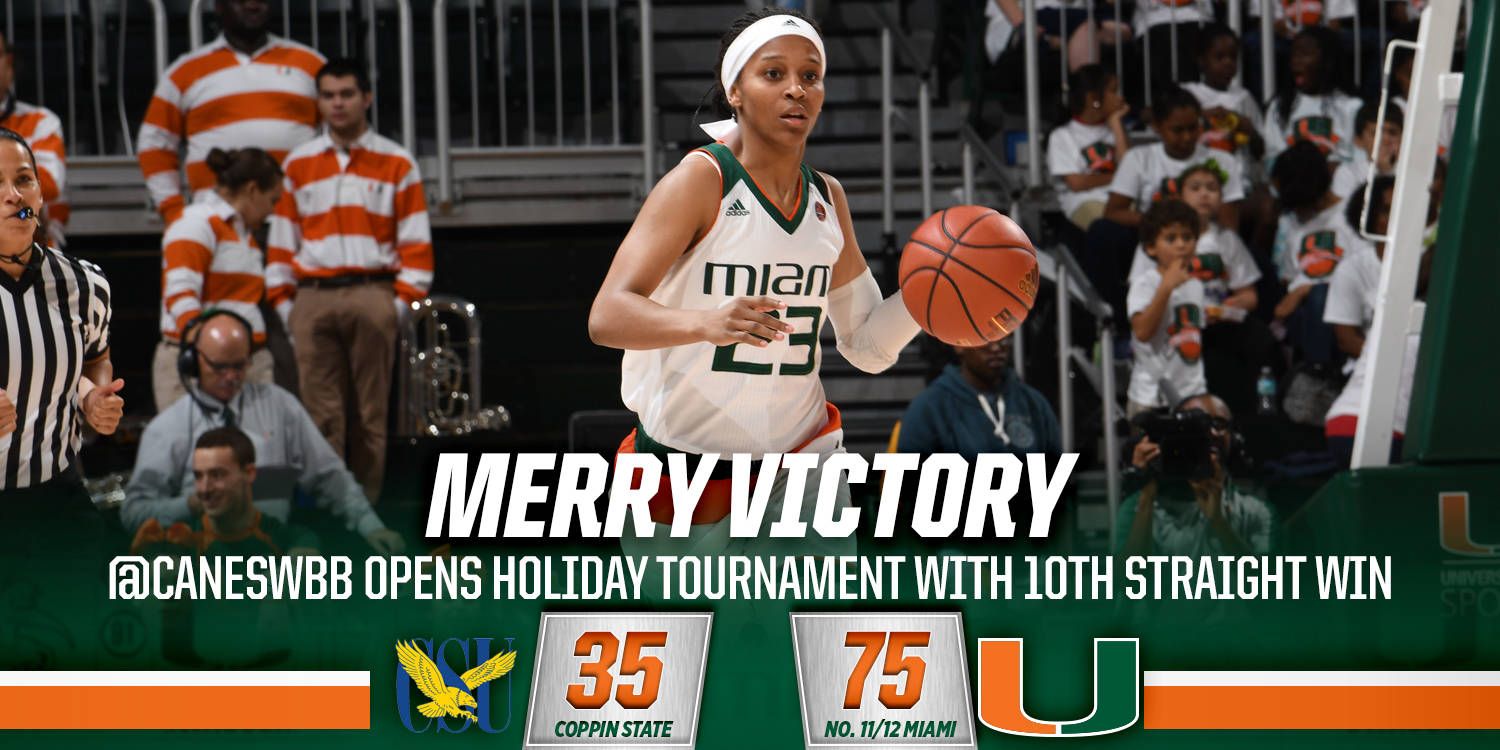 CORAL GABLES, Fla. – The University of Miami women’s basketball team rolled past Coppin State, 75-35, Monday evening at the Watsco Center in its first game of the Miami Holiday Tournament.

Senior guard Adrienne Motley and junior forward/center Erykah Davenport each scored 15 points, shooting a combined 12-of-16, as No. 11/12 Miami (10-1) picked up its 10th consecutive victory.

“They started the game just really sharp,” Miami head coach Katie Meier said of the duo’s performance. “I thought that Motley was in a zone . . . We play tomorrow, but I think if I had let both of them play more than 20 minutes, they would have had some career nights. The bigger picture is that we are trying to win the tournament and we have to get ready for ACC play.”

The Hurricanes, who made their first seven shots of the contest, raced out to a 13-0 lead in the opening three minutes and six seconds. Miami would go on to take a 21-15 lead at the end of the first period.

In the second period, Miami extended its lead to as many as 18 points before Coppin State (0-9) junior forward Candice Beverly hit a layup to beat the halftime buzzer to make it 39-23 at the intermission.

Motley (13), Davenport (nine) and sophomore forward/center Emese Hof (eight) combined for 30 points in the first half, together shooting 12-of-15.

In the third period, the Hurricanes’ stifling defense held the Eagles without a point for five minutes and 18 seconds, during which Miami pushed its advantage to 28 points. A basket by Coppin State senior guard Keena Samuels with one second left in the quarter ended the cold spell and put the score at 59-33 after three sessions.

Miami’s defense only got stronger in the final frame, limiting Coppin State to just two points and zero made field goals. It marked the second time since the advent of the quarter system last season that Miami gave up just two points in a period, joining Feb. 17, 2016 against Duke.

“We had a goal; we wanted to keep them under 50 and they were at 23 at half,” Meier, who celebrated her birthday Tueday, said. “In the third quarter, they made some really tough shots. It wasn’t a breakdown or anything, and then in the fourth they just weren’t making the shots they were making before.”

Overall, the Hurricanes allowed just four points and one made field goal in the final 15 minutes of the game, en route to notching their first 40-point win since Nov. 28, 2014 versus Illinois State.

Motley, who moved into a tie with Vicki Plowden (1990-93) for No. 10 on Miami’s all-time field goals made list with 579, and Davenport were the lone Hurricanes to finish with double figures.

However, the Hurricanes’ bench was stellar, registering a total of 30 points and 30 rebounds. Coppin State’s bench had 10 points and six rebounds, marking the 10th time in 11 games Miami’s bench outscored that of its opponent.

“Nine people off the bench played and all did something special. It was really fun,” Meier said. “They have worked hard; they have been here over break. All of the other students are home . . . They did the unselfish things and rebounded and shared the ball versus trying to just make themselves look good.”

The Hurricanes held the Eagles without a double-digit scorer, as Samuels paced the team with eight points.

This is now the second straight year Miami, which had a 52-23 edge in rebounding and a 19-4 advantage in assists, has won 10 straight games during non-conference play.

The Hurricanes will now take on Maine in the Miami Holiday Tournament championship game Tuesday at 5 p.m.

·         After making their first seven shots of the game, Miami’s first missed shot of the game came with 4:15 left on the clock in the first period.

·         The Hurricanes led by for all but the first 11 seconds of the contest. It was the fifth time this season Miami has led for 39-plus minutes of action.

·         This was the ninth time Miami has won by double-digit points this season, including the sixth time by 20-plus and the third by at least 34.