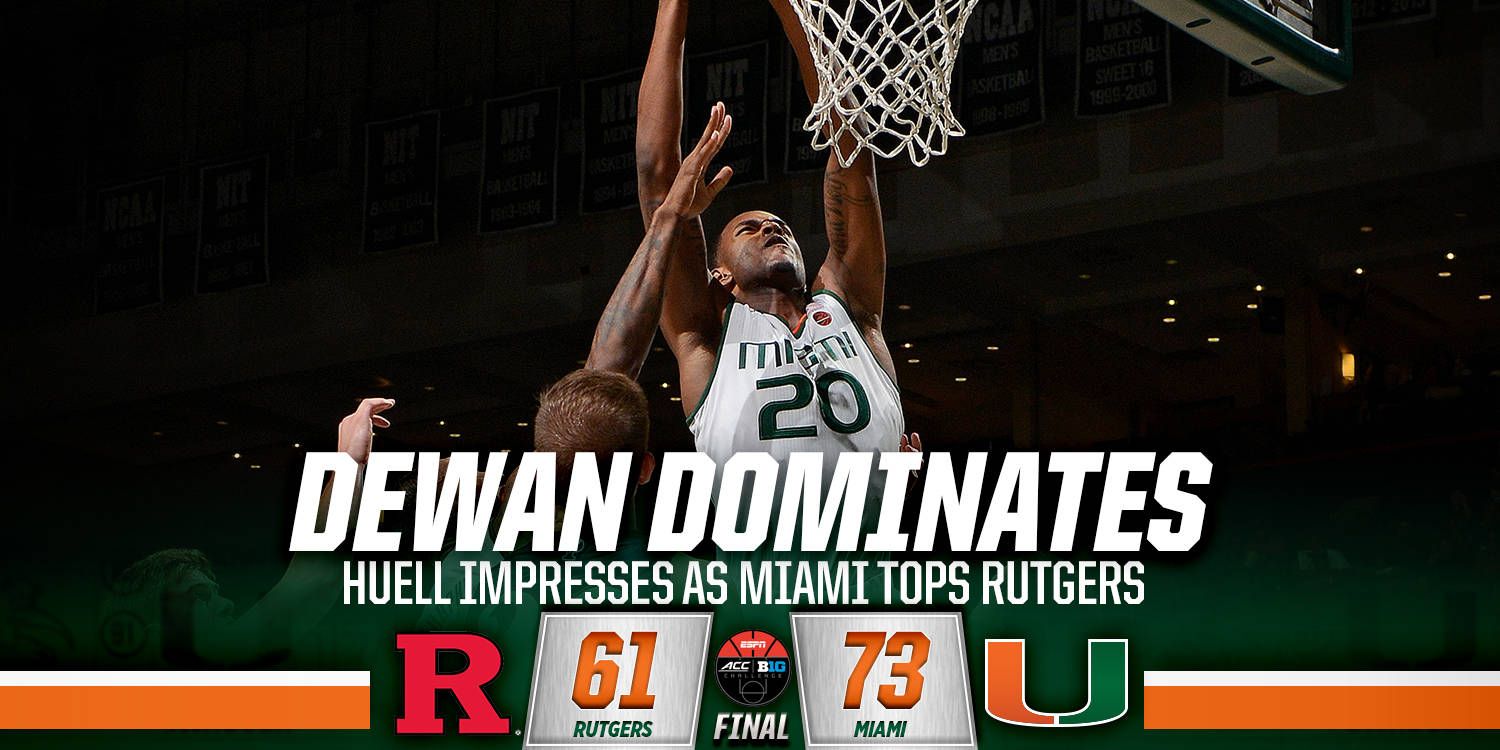 CORAL GABLES, Fla. – Dewan Huell thought he might have woken up his entire dormitory hallway with how loud he was playing his music Wednesday morning.

If his performance against Rutgers in a 73-61 win at the Watsco Center was any indication, head coach Jim Larrañaga might tell him to turn up the volume next time.

“I knew I was starting since yesterday. I went to sleep happy and woke up even happier,” Huell said.

Miami outrebounded the Scarlet Knights, who entered the game as the fourth-best team on the glass nationwide, 44-30.

“We made a very strong emphasis to the team, if we don’t rebound, we’re not even going to be in the game,” head coach Jim Larrañaga said. “We really got ourselves off to a good start by rebounding the ball and keeping them off the backboards, and that led to some fast breaks.”

Leading by six at half, two thunderous slams from Huell helped push Miami’s lead back to double-digits at 42-32 with 15:47 left in the game.

“Second half, I think the ball just found me when I was going to the boards,” Huell said.

The Hurricanes (5-2) topped Nebraska in the 2015 ACC/Big Ten Challenge and beat Illinois in 2014. Miami improved to 5-5 all-time in the Challenge in its first matchup with Rutgers since 2011.

The host Hurricanes held Rutgers scoreless over a stretch of over nine minutes beginning at the 18:40 mark of the second half, ripping off a 17-0 run to pull away.

“I think we just played hard. We locked in. We were focused,” said freshman guard Bruce Brown about the run. ”We didn’t want to make too many mistakes, because the game was close and we thought it never should have been close.”

The Scarlet Knights missed 11 straight shots until a three-pointer from Mike Williams, who led the visitors with 16 points.

The Hurricanes (5-2) took an early advantage with a 12-2 run that began less than a minute into the first half.

Reed, who totaled 32 points in three games at last weekend’s AdvoCare Invitational, finished 6-for-10 from the field and grabbed six rebounds.

The Scarlet Knights (6-1) clawed their way back into it, however, stringing together an 11-2 stretch of their own to make it a six-point game at halftime.

Junior Ja’Quan Newton, who led all scorers with seven first-half points, converted a traditional three-point play on Miami’s final offensive possession of the first period to put the Hurricanes up 34-28.

Miami outrebounded Rutgers 11-2 in the opening 9:06, and led the rebounding margin 23-14 at halftime.

The Hurricanes next take part in the Hoop Hall Miami Invitational at the American Airlines Arena Sat, Dec. 3. Tipoff is set for 5:30 p.m.

“First of all, I was very impressed with Rutgers’ ability to rebound the basketball. It reminded me of a situation last year where we went to NC State and told the team that they’re a great offensive rebounding team. Instead of really taking care of business on the backboards, the very first possession, NC State got four offensive rebounds, and on the fourth shot they took, they hit a three. It got worse from there.”

“We made a very strong emphasis to the team, if we don’t rebound, we’re not even going to be in the game. We really got ourselves off to a good start by rebounding the ball and keeping them off the backboards, and that led to some fast breaks. If you look at the defensive field goal percentage from two [-point range] and from three, it was really terrific tonight. 36 percent overall, 18 percent from three…we’d love to have that every night.”

“I think we play hard. Our guys were not happy that we lost two games back-to-back in Orlando, and we had some of the same issues tonight – 19 turnovers. Turnovers are what cost us the game – not our defense, not even our shooting. We didn’t shoot the ball great, but we turned the ball over. As soon as you turn it over, they get a fast-break layup. We can’t defend that. We’ve got to do a better job. We’re starting two freshmen…we’re a little bit young, and we don’t have quite the team chemistry on offense yet. You can see it by nine assists to 19 turnovers. It really should be the opposite.”

On his decision to start freshman Dewan Huell…

“What we did as a staff this week, we met and talked about Rutgers and decided the best way to beat them was to put our best rebounders on the floor. Our four best rebounders statistically are Kamari Murphy, Bruce Brown, Dewan Huell and Davon Reed. You add Ja’Quan Newton, who had a heck of a rebounding game tonight getting six. You can see the balance in the rebounding – Bruce getting nine, Dewan seven, Murphy four and our backcourt six and six apiece. That is really good team rebounding.”

On Davon Reed’s 18 points, and his two three-pointers early in the game…

“Those are the only two he got. We have to get him more open looks. I thought Ja’Quan did a great job finding him early, then we ran an out-of-bounds play and we got it for him. If we can do that more regularly…and we’re working on something that will hopefully do it.”

On outrebounding Rutgers, who entered the game fourth in the nation in rebounding, by a 44-30 margin…

“I think we just wanted it more. We wanted to execute our game plan. Also I wanted to help the bigs, because the last couple of games they were getting offensive rebounds and I wanted to chip in and help take the pressure off them a little bit.”

“I think we just played hard. We locked in. We were focused. We didn’t want to make too many mistakes, because the game was close and we thought it never should have been close.”

“I liked the breakaway layup to show off my ball-handling skills.”

On making his first college start…

“I knew I was starting since yesterday. I went to sleep happy and woke up even happier. I think I woke up my whole hallway with my music, but I do that regardless, every game day…it was great. Just being my hometown and get the start…”Miami, Florida…Freshman, No. 20”…it’s a great feeling right there.”

On scoring 12 of his 14 points in the second half…

“Second half, I think the ball just found me when I was going to the boards, actually. I did something with it.”

Opening Statement…
“Give [Miami] a lot of credit. I’ve watched a lot of film on them. I thought length bothered us. I thought they did a really good job on the backboards. We need to play better in a game like that to be able to compete with a really good ACC team. All of the things I saw on tape that I was worried about happened in the game. They did a real good job. I thought they played angry. You have to give Miami a tip of the hat.”

On what his message was to the team after suffering its first loss…
“I thought we had a great game plan and we didn’t execute it, the way we did…that team is long. We were concerned with their length. We just have to play better. But we fought the whole game. Again, I have to give them credit. They were better than we were. We have to rebound. We have a game coming up, and we have to play much better. It’s nice to be at home.”

On Miami’s 17-0 run in the second half…
“They go on runs. That’s what they do. I saw all the tapes. I watched every game film. That’s what they do. You have to try to break it up…your defense, you try to change some things up. I tried to. We didn’t score the ball the way we needed to. I wanted to go inside. We did, and when we got good looks, we didn’t finish them. I thought we missed a lot of opportunities to kind of break runs. Certainly, it’s to their credit. They’re long. [Dewan] Huell, I love him. I think he’s going to be terrific. They have a lot of guys who posed a lot of problems for us.”

On his team’s defense forcing 19 turnovers…
“I was worried about us turning the ball over a lot, because that’s what they do to teams. But we kind of grind. We have to be better to win a game like that. We grind. We’re supposed to be in lanes and supposed to be in gaps, and they have a lot of guys who dribble it and drive it. Hopefully we were in our gaps at times and the steals came to us. We were able to kind of do a few things defensively that I liked, but certainly not the way we’ve been defending.”

On entering the game as the No. 1 offensive rebounding in the country and being outrebounded…
“Tapes are out. Tapes are out. This team is as good of a rebounding team as we’ll face. Their length and athleticism was a factor. Who you are – and when you’re leading the nation in offensive rebounding – teams aren’t just going to sit back. This guy is as good of a coach as there is in the country. He’s not going to just let you get offense. So you have to be better than the scouting report that’s out on you, and our guys aren’t ready for that yet.”