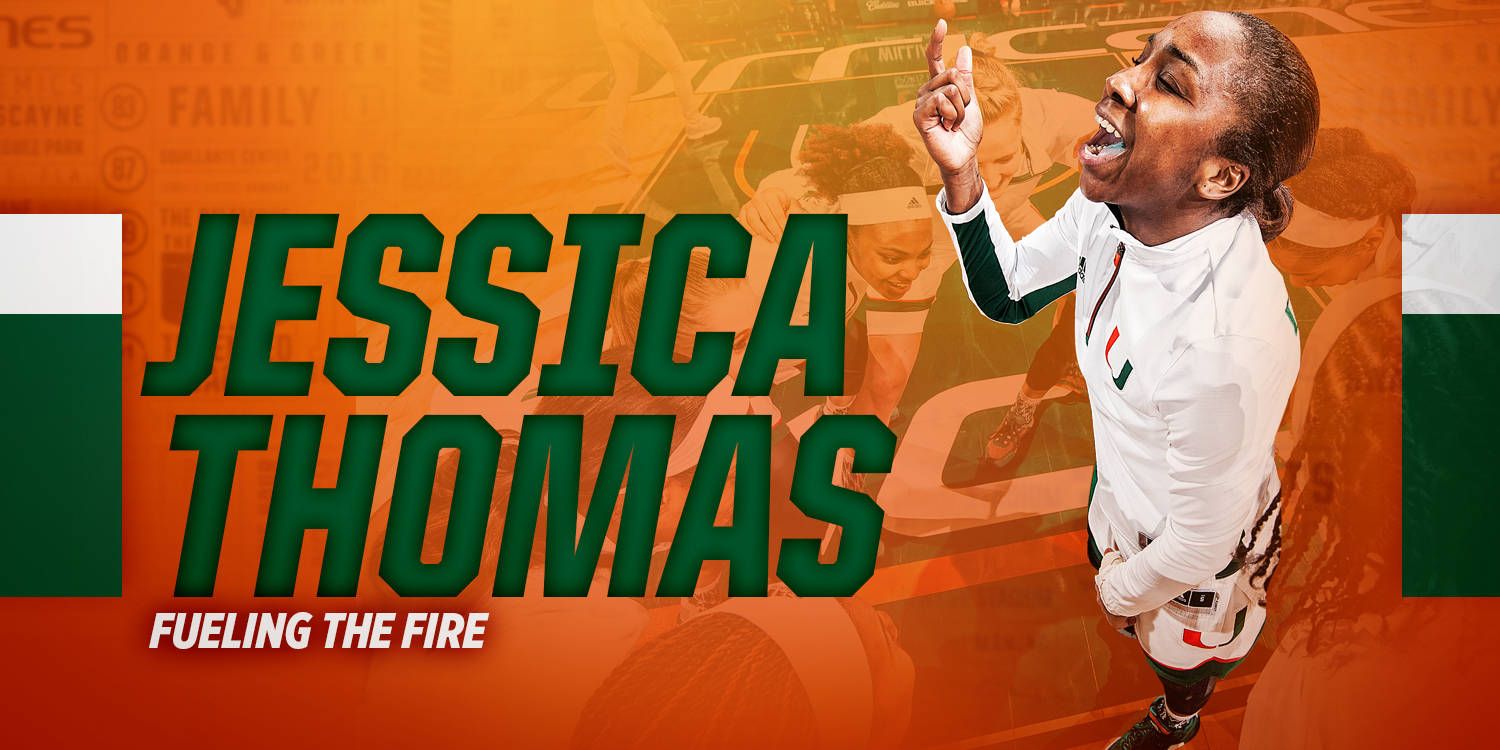 CORAL GABLES, Fla. – Senior Jessica Thomas is a gym rat. She is the first one there and the last one to leave.

The Gainesville, Fla., native on the University of Miami women’s basketball team comes from a family where she is the youngest of four children and the only girl.

Having to constantly prove herself to her older brothers while growing up, a competitive work ethic was instilled in Thomas at an early age. Her oldest brother, Lamar, played football for the Hurricanes and in the NFL, and he inspired Thomas to go to Miami, too.

Despite her intensity, passion and desire to get better, Thomas was not highly recruited coming out of Buchholz High School.

Year after year, Thomas would make the trip down from Gainesville to Coral Gables to play in the Hurricanes basketball camp, where she received coaching directly from Miami head coach Katie Meier. Meier saw traits in Thomas that other coaches failed to see. Thomas’ persistent work ethic and willingness to learn caught Meier’s eye.

“I knew she had a fire,” the 12th-year Hurricane coach said. “My point guard is the motor of the team. Her and her teammates need that fire.”

Thomas made herself at home in Coral Gables and she brought that fire with her. Earning ACC All-Tournament Second Team and All-ACC Academic Team honors and leading the Hurricanes in assists (3.6), 3-pointers made (64) and minutes (31.6), Thomas had an outstanding junior season.

“Being great isn’t about what you do,” Thomas said. “It’s about getting up in the morning when someone else isn’t.”

Meier and Thomas have a unique dynamic that is rooted in respect. The bond between the two has evolved into an undeniable friendship.

“Jessica has made me a better coach because of the challenge and the trust,” Meier said. “I am proud of her development.”

Thomas invests hard work into basketball and her leadership. She enters 2016-17 as team captain for the second consecutive year, alongside co-captain and fellow senior guard Adrienne Motley. The backcourt pair consists of the two goofiest players on the team off the court and the most serious on the court. The duo has become one of the strongest in the ACC.

“Jessica lights a fire under you that builds your confidence up,” Motley said. “People respect her a lot for that.”

Debbie Anontelli, a former player at NC State and now a highly-respected women’s college basketball television analyst with 28 years of experience, has witnessed Meier turn Thomas into an elite point guard. Thomas’ willingness to learn has greatly enhanced her development into a top ACC floor general.

“Jessica Thomas is what college basketball is all about,” Antonelli said.

Thomas’ standout junior season gives her an excellent platform to build off of going into her final year for the Hurricanes. Through endless hours of hard work, she remembers where she came from and what she had to do to become the player she is today.

“I want to inspire people who do not think they have a chance,” Thomas said.

Thomas continues to fuel the fire for the Hurricanes basketball team as she ignites her own with her inspiring story.