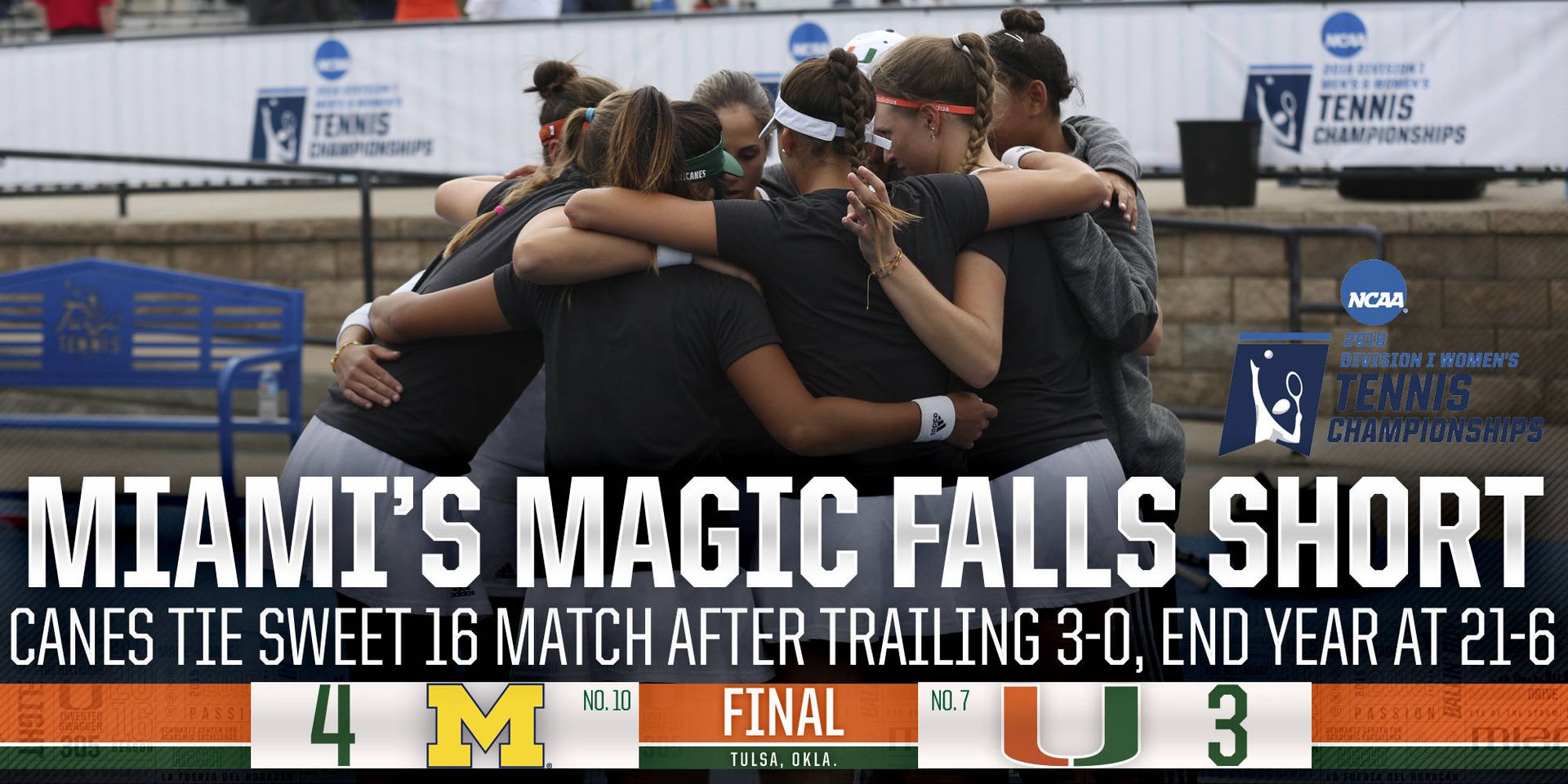 TULSA, Okla. – In a Sweet 16 match Thursday that had two weather delays and lasted over seven hours, the University of Miami women’s tennis team had its comeback end one point shy against Michigan, falling 4-3.

With singles play moved indoors, seventh-ranked and seventh-seeded Miami (21-6, 12-2 ACC) charged back from a 3-0 deficit to level the score against Michigan, ranked and seeded No. 10. The Hurricanes then dropped the decisive match at the Michael D. Case Tennis Center on the University of Tulsa campus.

“Michigan played a great match tonight,” Miami head coach Paige Yaroshuk-Tews said. “I’m very proud of the season this squad put together. This, of course, was a tough one to lose, but that’s competitive athletics. Tonight, we just came up a bit short.”

The first two doubles matches ended within moments of each other. First, in a top-15 showdown, No. 11 Brienne Minor and Mira Rudor-Hook of Michigan (23-6, 10-1 B1G) won 6-2 over the No. 12 duo of senior Stephanie Wagner and sophomore Wendy Zhang. Sophomore Sinead Lohan and freshman Clara Tanielian then topped Kate Fahey and Alex Najarian, 6-2.

Sophomore Silvia Fuentes and freshman Ana Madcur won back-to-back games to pull to within 4-5 in the remaining doubles match before an 80-minute weather delay halted the action. The Michigan pair of Kara Hall and Ronit Yurovsky won the first game when play was resumed to take the match, 6-4, and give the Wolverines the doubles point.

After another delay of approximately two hours and four minutes, singles action was shifted inside following the completion of Stanford’s win over Florida.

Miami needed victories on all four remaining courts to win the match and took the first set on all four of them. Eighth-ranked Lohan, who suffered her only singles defeat of the spring against Michigan Feb. 5, got the Hurricanes on the board with an impressive 6-3, 6-2 win versus No. 19 Minor.

Madcur gave Miami its second point of the day, tallying a 6-4, 6-4 victory over Teona Velehorschi, making the score 3-2. Fuentes then evened the score with a three-set triumph against Najarian, 6-3, 1-6, 6-2.

The match came down to court one, a contest that featured a pair of seniors who are seeded in the 2016 NCAA Singles Championship, in ninth-ranked Wagner and No. 15 Yurovsky. Trailing 1-4 in the second set after dropping the first, Yurovsky went on a roll the rest of the way to earn a 6-7 (3-7), 6-4, 6-1 victory and clinch the match for Michigan.

Miami’s superb 2016 campaign saw the team reach the Sweet 16 for the 11th year in a row, the third-longest streak in the nation. The Hurricanes posted 20-plus wins for the 11th time in the past 13 seasons and won 17 of their final 19 matches.