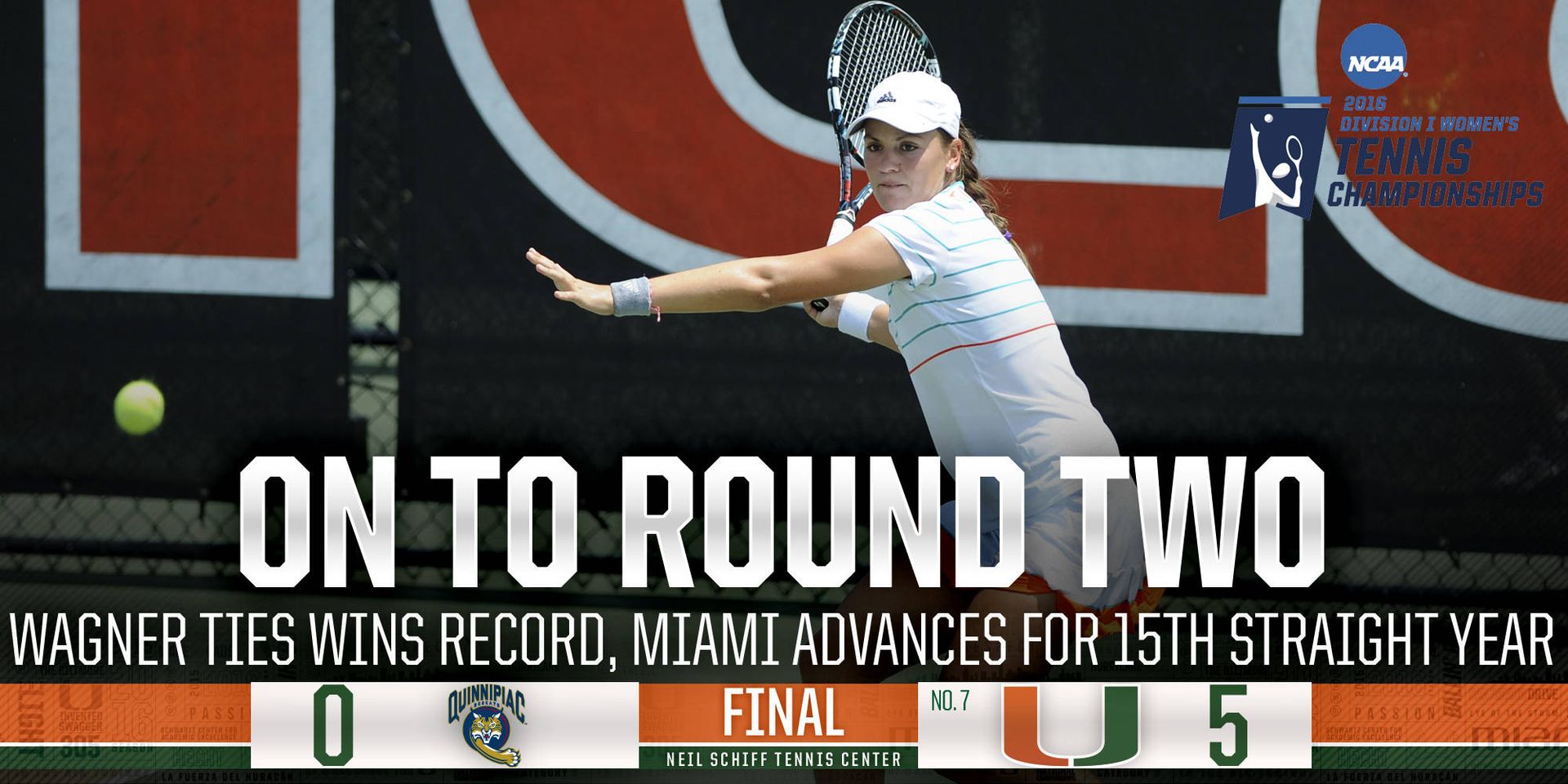 CORAL GABLES, Fla. – For the 15th season in a row, the University of Miami women’s tennis team is headed to the second round of the NCAA Team Championship.

The Hurricanes needed just an hour and a half to defeat the Bobcats, and it was senior Stephanie Wagner who clinched the win and tied the program singles victories record by doing so.

Sophomore Sinead Lohan and freshman Clara Tanielian sealed the doubles point for Miami with a 6-2 win versus Sophia Dzulynsky and Sitilia Rencheli. The No. 12-ranked duo of senior Stephanie Wagner and sophomore Wendy Zhang had their match against Rachel Horton and Sydney Young left unfinished, holding a 5-3 edge.

“Having so much time off between ACC’s and NCAA’s, I just thought it was important that we stuck to a game plan early on, and we kind of got our rhythm,” Yaroshuk-Tews said of the Hurricanes’ doubles play. “I think it was important to get out there and just be in a competitive situation and respond well, and we did that.”

Miami got off to a blazing start in singles play, winning 21 of the first 22 completed games across all six courts. Fuentes was the first to tally a win and she did so without dropping a game in an impressive 6-0, 6-0 victory against Lu. Three of Miami’s four 6-0, 6-0 wins in 2016 have been by Fuentes.

No. 75 Zhang then wrapped up a 6-1, 6-0 win over Rencheli to put the Hurricanes within a point of victory.

“Really happy for her, she’s got to finish the job now. She’ll do that in due time,” Yaroshuk-Tews said. “We had to treat this match as though we were preparing for our next round and that’s what we did. We didn’t lower our level, we kept the energy high and we did what we needed to do.”

Eighth-ranked Lohan also logged a victory, as her match finished nearly simultaneously with Wagner. She picked up a 6-0, 6-2 triumph over Horton to move to 24-1 this spring.

Miami has now won 20-plus matches for the 11th time in the last 13 seasons. Additionally, the Hurricanes are now 22-1 at home in NCAA Team Championship play, with 21 shutouts and a total margin of 92-7. This was the 128th shutout for Miami under Yaroshuk-Tews, including the 71st since 2009.

To track the University of Miami women’s tennis team on Twitter during the NCAA Championships, follow @CanesWTennis.