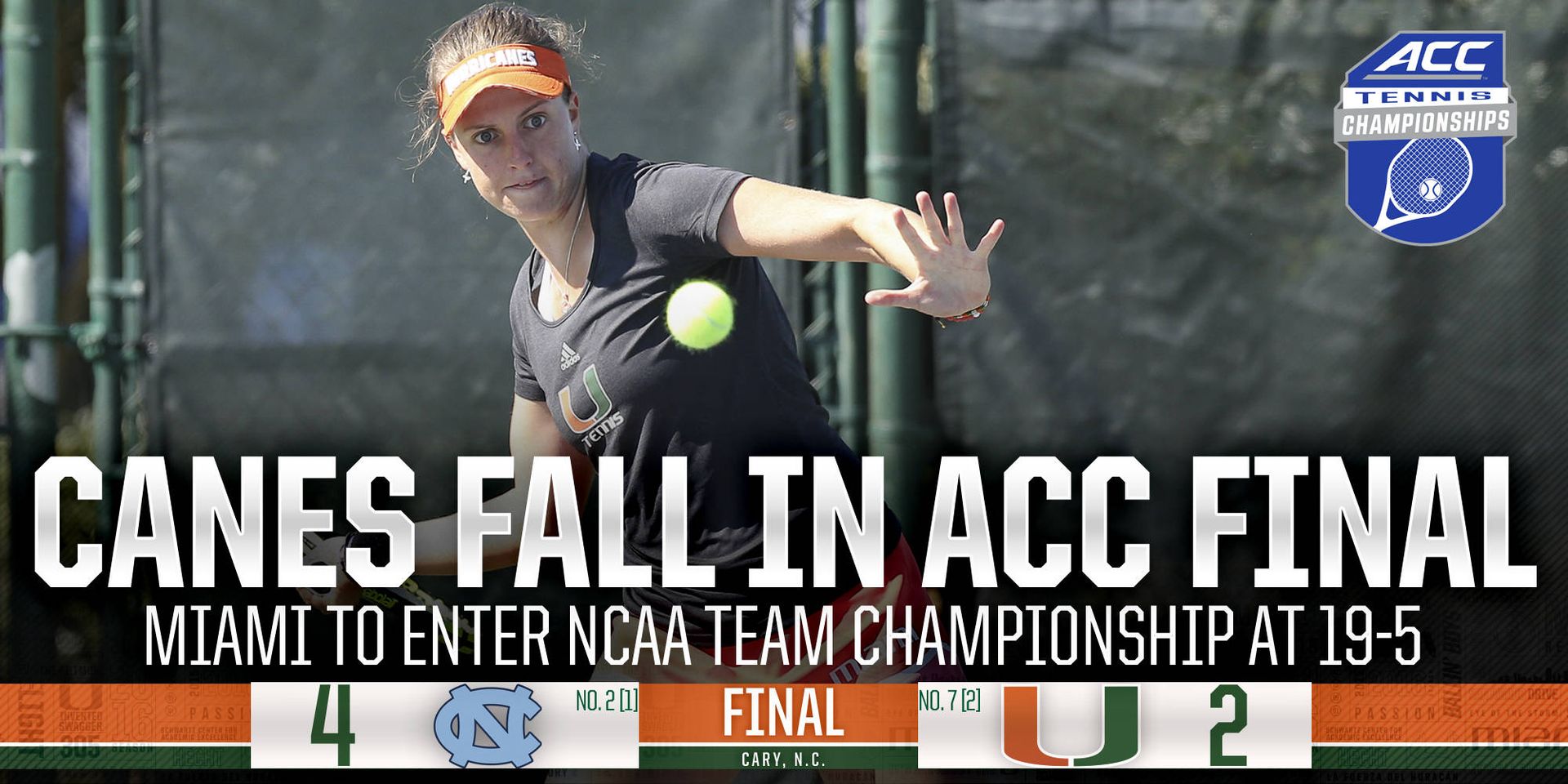 CARY, N.C. – The University of Miami women’s tennis team came up just short in the title match of the 2016 ACC Championship, falling to North Carolina, 4-2.

Seventh-ranked and second-seeded Miami (19-5, 12-2) tied the match at both one and two, but second-ranked and top-seeded North Carolina (29-2, 14-0 ACC) was able to close it out and earn the conference crown.

The defeat, in front of a large contingent of local Tar Heel fans, snapped the Hurricanes’ longest winning streak of the past decade at 15 matches. Miami had not been on the short side of a contest since falling in a 4-3 decision Feb. 28 at then-ninth-ranked Duke.

The Hurricanes struck first in doubles, as sophomore Sinead Lohan and freshman Clara Tanielian raced out to a 5-0 lead on No. 89 Jessie Aney and Kate Vialle, en route to a 6-2 victory.

The fourth-ranked pair of Hayley Carter and Whitney Kay from North Carolina evened the doubles score with a 6-1 win over the ninth-ranked duo of senior Stephanie Wagner and sophomore Wendy Zhang. The Tar Heels clinched the doubles point when Ashley Dai and Chloe Ouellet-Pizer defeated sophomore Silvia Fuentes and freshman Ana Madcur, 6-2.

“We played great at two-doubles. We were hesitating at one-doubles, and at three-doubles we just weren’t following the game plan,” Yaroshuk-Tews said. “When you do that against a seasoned team, a team that has a senior playing in that three position in doubles, it’s tough to come out with the doubles point, which is always a big point against UNC.”

Lohan, the eighth-ranked player in the country, leveled the score for the Hurricanes to open singles play, taking down No. 39 Kay, 6-2, 7-5. It was the third straight-set win in as many days at the ACC Championship for Lohan, who is now 23-1 this spring, with eight top-50 victories.

Carter, the nation’s top-ranked player, avenged her only dual match loss of the season, topping sixth-ranked Wagner, 6-2, 6-4, to put the Tar Heels back in front, 2-1.

Miami was once again able to even the score, and this time it was Tanielian who got on the board. She won her third singles match of the ACC Championship, tallying a 6-3, 0-6, 7-5 triumph over Marika Akkerman.

For the second day in a row, the focus turned to adjacent courts four and six. Madcur charged out to a 4-0 lead in the third set against Dai, while Fuentes, who had trailed 3-5 in the second set against Vialle before forcing a third, came back from down 2-4 to tie the decisive set at 4-4.

“I think that UNC played a great match, which we expected them to do. They played a great match,” Yaroshuk-Tews said. “We were rolling in some [singles] matches and we should have been able to get off the court and put those points up on the board. I think it would have affected UNC a little bit, seeing some quick points go up on the board. We weren’t able to do that and I think that they just hung around and the match just kind of went from there.”

This was the sixth ACC Championship title match appearance for the Hurricanes in their 12 years in the conference.

Miami will now await its NCAA Team Championship draw. The Hurricanes are looking to host the first and second rounds for the 12th year in a row, as well as reach an 11th consecutive Sweet 16. The selection show is slated for Tuesday, May 3, at 5 p.m.