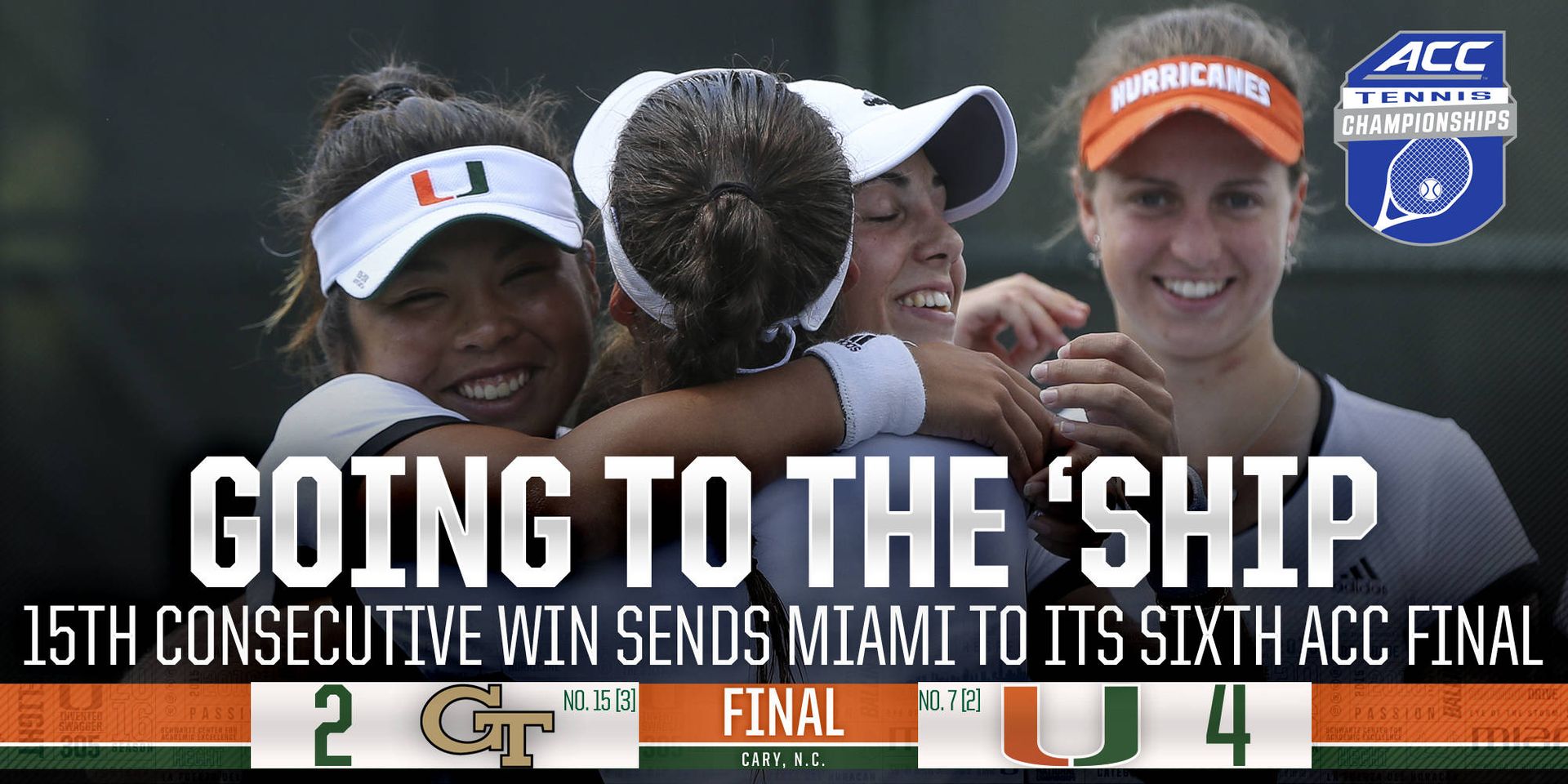 Canes Down No. 15 GT, Advance to ACC Title Match

CARY, N.C. – For the sixth time in its 12 years in the conference, the University of Miami women’s tennis team is headed to the ACC Championship final.

The seventh-ranked and second-seeded Hurricanes earned 4-2 victory over No. 15-ranked and third-seeded Georgia Tech Friday at the Cary Tennis Park. The win was also the 15th in a row for Miami (19-4, 12-2 ACC), which now has its longest winning streak of the last decade.

“It feels great,” Miami head coach Paige Yaroshuk-Tews said of reaching the title match.” I think that these girls have been playing so hard and to get there with the two matches that we played is big. They’ve been playing tough tennis and to be in the finals of our conference championship is exciting. We’re excited; it’s where we wanted to be.”

The Hurricanes got off to a scorching start in doubles behind outstanding play from the ninth-ranked duo of senior Stephanie Wagner and sophomore Wendy Zhang. In a top-10 showdown against No. 10 Paige Hourigan and Kendal Woodard, the Miami duo lost a total of nine points en route to a 6-0 win.

Georgia Tech (17-8, 11-3 ACC) pulled even with a 6-4 victory by Rasheeda McAdoo and Johnnise Renaud over sophomore Sinead Lohan and Clara Tanielian.

Sophomore Silvia Fuentes and freshman Ana Madcur trailed 2-3 and won three games in a row to pull within a game of victory. Natasha Prokhnevska and Alexis Prokopuik then won back-to-back games to even the match at five apiece, but the Hurricanes closed it out by winning the final two games. The 7-5 win put Miami in front, 1-0.

“Steffi and Wendy were given targets and I think, typically, against that team they do pretty well when they’re given targets,” Yaroshuk-Tews said. “It was the second time we’ve seen the team this year and they’ve played well against them both times. Number three [with Fuentes and Madcur] could have gone either way. It was a competitive match. I think our kids turned the corner there and just started playing a little more aggressively.”

The Yellow Jackets evened the score early in singles, as No. 42 Renaud picked up a 6-2, 6-2 win over sixth-ranked Wagner.

Tanielian put Miami back in front with her second straight-set victory in as many days at the ACC Championship, taking down Prokopuik, 6-4, 6-1. Tanielian has dropped just six games in two singles wins thus far in Cary.

Lohan, ranked eighth in the country, tallied her seventh top-50 victory of the spring with a 7-5, 7-5 triumph over No. 41 Hourigan to get the Hurricanes within a point of victory.

With all eyes focused on adjacent courts four and six, both Madcur and Fuentes charged out to 5-3 leads in their third sets. Ultimately, it would be Fuentes to punched Miami’s ticket to the final, sealing a comeback 2-6, 6-3, 6-3 win over Woodard. Madcur’s match was left unfinished with her ahead, 6-2, 4-6, 5-4.

“I think Silvia was just a little bit out of sorts at the beginning of the match, but she figured it out and she kind of just settled into the match. She started playing her tennis,” Yaroshuk-Tews said. “ . . . Silvia was just able to sink her teeth into the match, stay calm when down against a big hitter and a powerful player, and that just says a lot about her poise and her maturity.”

Miami is set to take on second-ranked and top-seeded North Carolina (28-2, 14-0 ACC) in the ACC Championship finale Sunday at 10 a.m.

“This is what college athletics is all about. Not only tomorrow, but today,” Yaroshuk-Tews said. “Georgia Tech is playing some of the best tennis I’ve ever seen that team play and we know UNC is going to be playing good tennis. We know they’re going to be fighting hard. We’re excited to go out there and just compete our tails off and give it everything we have and let the chips fall where they may.”

The ACC Championship title match between the Hurricanes and Tar Heels will be broadcast live on ESPN3 HERE.