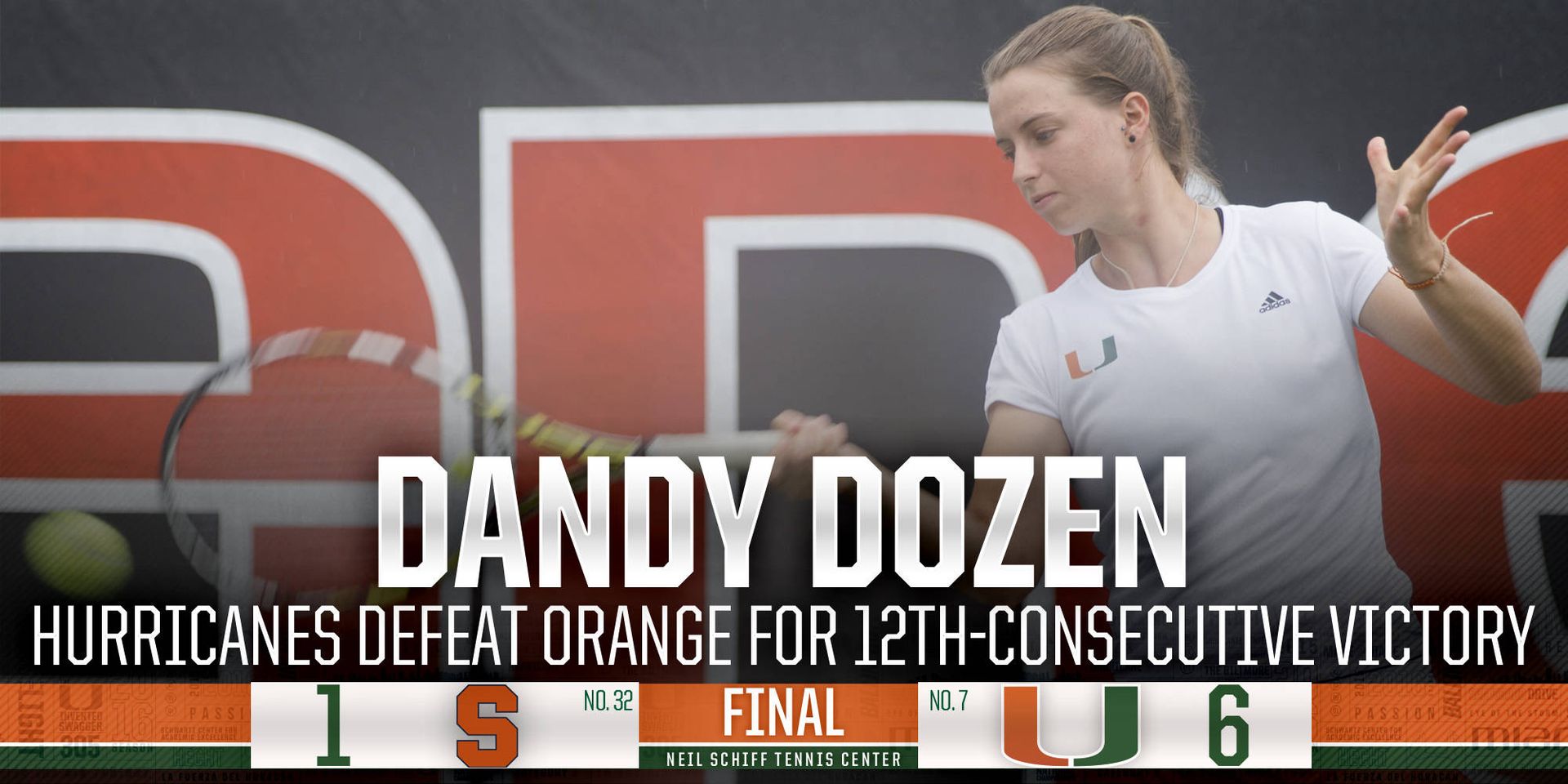 CORAL GABLES, Fla. – The University of Miami women’s tennis team rolled to a 6-1 victory over No. 32 Syracuse Friday at the Neil Schiff Tennis Center to stretch its winning streak to 12.

Seventh-ranked Miami (16-4, 11-2 ACC) opened the day with a strong showing in doubles and carried the impressive play into singles action to move to 8-0 all-time against Syracuse (12-7, 6-7 ACC).

The Hurricanes led 5-2 on all three doubles courts at the same time and got the two wins they needed in quick succession. Sophomore Sinead Lohan and freshman Clara Tanielian first downed Dina Hegab and Nicole Mitchell, 6-2.

Senior Stephanie Wagner and sophomore Wendy Zhang, together ranked eighth nationally, had their top-30 showdown against No. 29 Gabriela Knutson and Valeria Salazar left unfinished while holding a 5-4 edge.

In singles play, Miami had three matches come to an end in a span of just 10 minutes to clinch the victory over the Orange.

Sixth-ranked Wagner was first to win, picking up the 130th victory of her career with a 6-3, 6-2 triumph versus Salazar. Wagner is now one win behind Miami associate head coach Laura Vallverdu for second place on the program’s all-time singles victories list.

Fuentes extended the Hurricanes’ edge to 3-0 by completing a 6-0, 6-4 defeat of Tritou. Sixth-ranked Lohan solidified the Miami win by taking down No. 76 Shkudun, 6-1, 6-2. The victory moved Lohan to 19-1 this spring, including 10-1 against ranked opponents.

Minutes later, with the match already in hand, Madcur posted a 6-1, 6-4 win against Libi Mesh to tally another point for the Hurricanes. Syracuse earned its lone point of the day when No. 98 Knutson topped No. 64 Zhang, 7-5, 6-3.

In the final match of the afternoon, Tanielian logged a 7-5, 6-2 victory against Hegab to give Miami its ninth win by at least five points this season, including its fourth such result in the last five matches.

Miami will cap its regular season Sunday at noon when it hosts Louisville at the Neil Schiff Tennis Center. The match will be broadcast live on ESPN3 HERE and it will be senior day for Wagner and Clementina Riobueno.