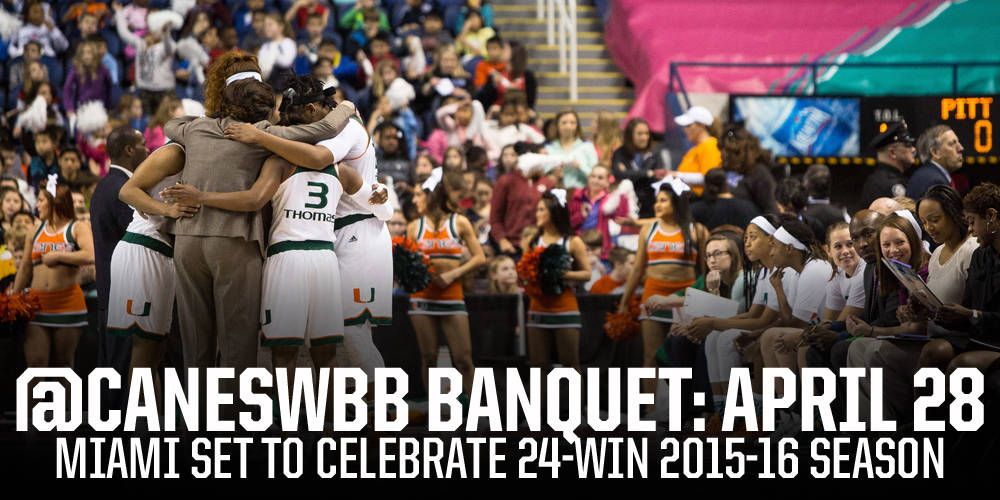 CORAL GABLES, Fla. – The University of Miami women’s basketball team is set to hold its annual banquet April 28 at 6 p.m. at the Newman Alumni Center.

The Hurricanes will celebrate their stellar 2015-16 season with a reception followed by a 7 p.m. dinner and program.

Under the direction of 11th-year head coach Katie Meier, who surpassed 200 wins at Miami in January, the Hurricanes went 24-9 this season, tying for the fifth-most wins in a single campaign in program history. Miami reached the postseason for the seventh year in a row and made its fifth NCAA Tournament appearance in the last six seasons.

The team’s lone senior, guard Michelle Woods, became the first player in program history to play in four NCAA Tournaments and was one of 30 Senior CLASS Award candidates nationwide.

Fans are invited to join the Hurricanes for the banquet, with adult tickets costing $60 per person and tickets for children 12-and-under costing $45. The deadline to order tickets is April 25.

Tickets can also be purchased by mail by filling out this form and mailing it to “UM Hurricane Club / ATTN: Rick Remmert / 5821 San Amaro Drive / Coral Gables, FL 33146” along with a check or credit card information.