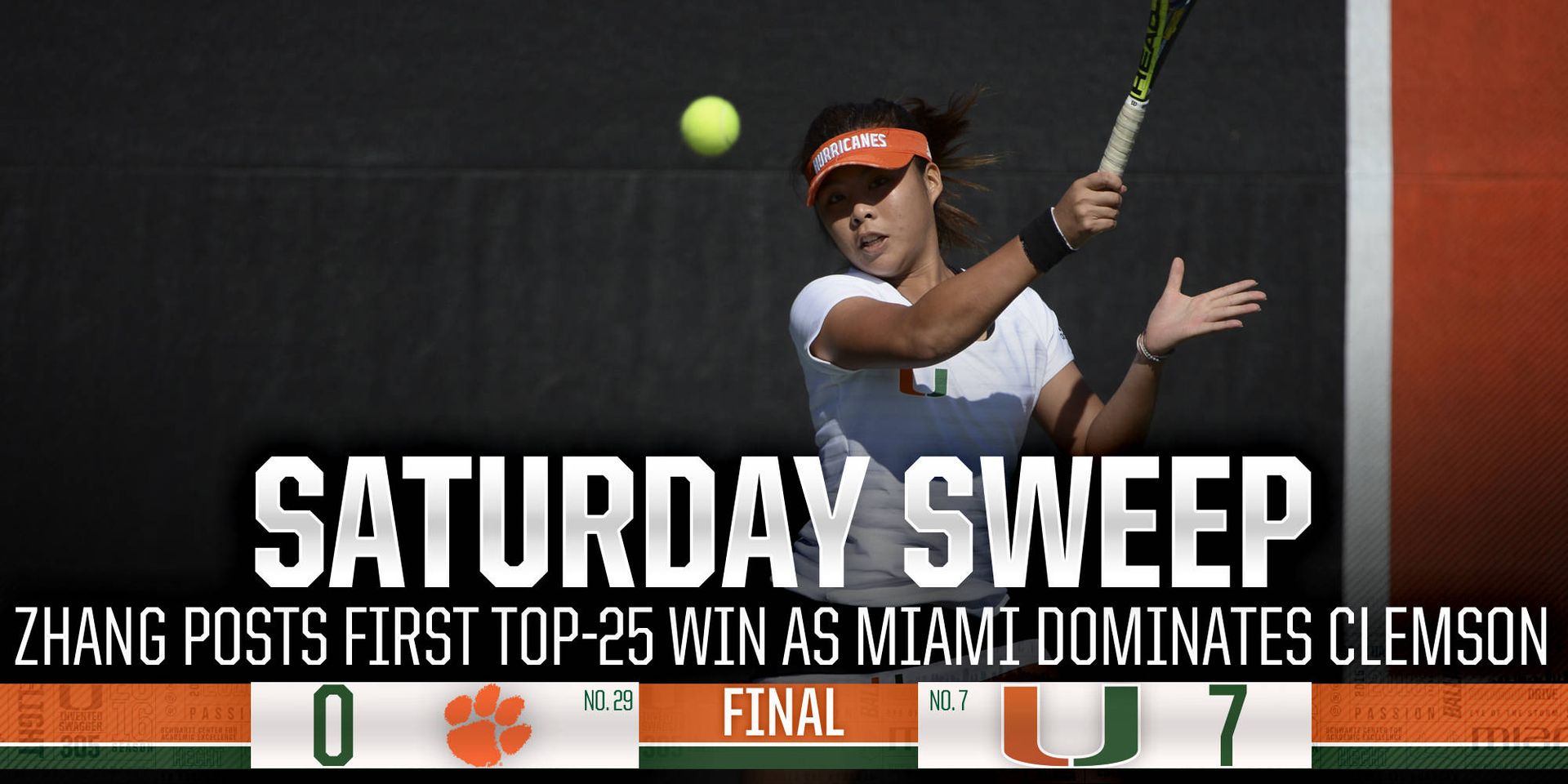 CLEMSON, S.C. – The University of Miami women’s tennis team began the month of April the same way it finished March—with a 7-0 ACC victory.

Seventh-ranked Miami (13-4, 8-2 ACC) shut out Clemson (8-7, 6-4 ACC) for the second season in a row, blanking the No. 29-ranked Tigers Saturday afternoon at Hoke Sloan Tennis Center. The Hurricanes have now won nine-straight matches this season and 16 in a row against Clemson, dating back to 2001.

Miami emerged victorious in a trio of tiebreakers en route to winning all six singles matches in straight sets.

“We had to embrace the environment today,” Miami head coach Paige Yaroshuk-Tews said after her 298th-career victory. “Windy, feisty opponents and a rowdy crowd [made for] just a good, ole’ college tennis match.”

The Tigers got the first win in doubles, with Tristen Dewar and Ally Miller-Krasilnikov topping sophomore Sinead Lohan and freshman Ana Madcur, 6-2. From then on, it was all Hurricanes.

Senior Stephanie Wagner and sophomore Wendy Zhang, ranked ninth in the country, evened the doubles score by taking five of the final six games against Ayan Broomfield and Fernanda Navarro for a 6-3 win.

After trailing 3-4, sophomore Silvia Fuentes and senior Clementina Riobueno won each of the last three games versus Joana Eidukonyte and Daniela Ruiz to take a 6-4 victory, giving Miami the doubles point.

Miami’s two freshmen, Madcur and Clara Tanielian, were the first to win their doubles matches. Tanielian doubled Miami’s lead with a 6-3, 6-2 victory against Miller-Krasilnikov and then Madcur stretched the Hurricanes’ advantage to 3-0 with a 7-5, 6-2 win versus Ruiz.

Sixth-ranked Lohan clinched the match for Miami, fighting off a 4-5 deficit in the second set to defeat Navarro, 6-2, 7-6 (7-3). The Waterford, Ireland, native is now 12-0 in her last 13 matches with 10 of the victories coming in straight sets.

Although the win was already in hand, the Hurricanes continued to impress in each remaining match. Like Lohan, fifth-ranked Wagner staved off a 4-5 deficit in the second set and came back to post a win. She took the final three games of her match against No. 52 Broomfield for a 6-2, 7-5 victory.

No. 109 Zhang then earned her first-career win over a top-25 opponent, knocking off No. 20 Eidukonyte, 7-6 (7-5), 6-3. The victory was the seventh over a ranked player in Zhang’s career and surpassed the previous top win she had, No. 55, by 35 spots. Eidukonyte opened the spring as the top-ranked player in the nation.

“Wendy played a complete match today,” Yaroshuk-Tews said. “When she does that, she’s capable of good things.”

Fuentes put the finishing touches on the Hurricanes’ fourth shutout of the season, including the third in ACC play, by beating Dewar, 7-6 (7-5), 6-4. This was the 125th sweep of Yaroshuk-Tews’ tenure at Miami, including the 68th since 2009.

The Hurricanes will play their final two road matches of the regular season next weekend when they face No. 19 Wake Forest Friday at 4 p.m. and No. 42 NC State Saturday at 11 a.m.