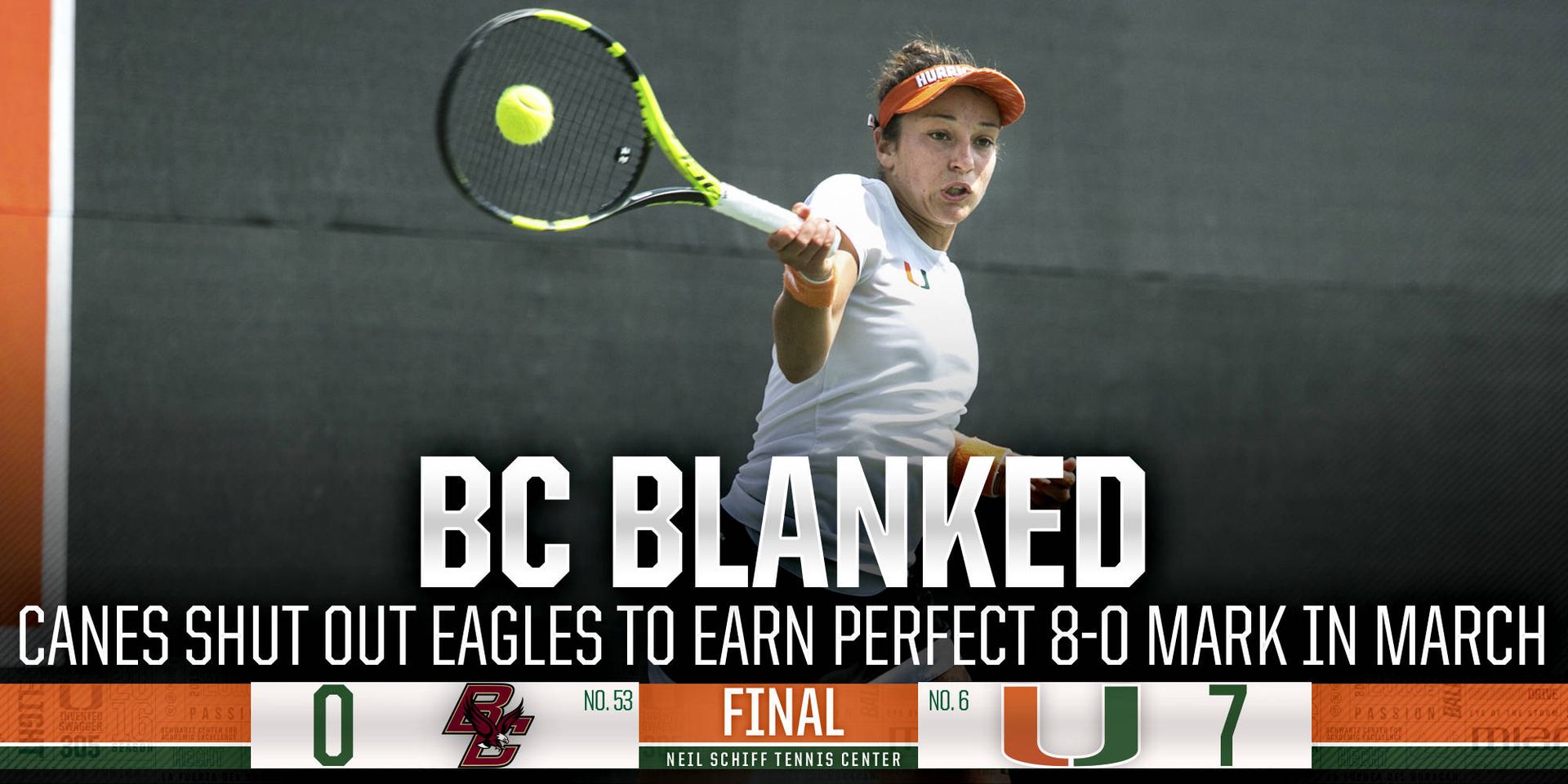 CORAL GABLES, Fla. – The University of Miami women’s tennis team wrapped up the month of March with an unblemished 8-0 mark by defeating No. 53 Boston College, 7-0, Sunday at the Neil Schiff Tennis Center.

This was the first perfect month for the Hurricanes since going 7-0 in March of 2014 and the Hurricanes outscored their opponents, 45-10, over their eight wins, seven of which were against ranked teams.

“They’re being mature, they’re keeping their heads open and they’re really listening to and implementing some of the things that we’re talking to them about,” Yaroshuk-Tews said of the team’s 8-0 March mark. “. . . They’re just showing an incredible amount of maturity and discipline and real commitment to the program, every single one of them, and that’s the key. We talk about not getting a kink in our chain and right now the chain is super-smooth.”

The Hurricanes got off to a strong start on all three doubles courts and never trailed on any of them at any point. Senior Stephanie Wagner and sophomore Wendy Zhang, the ninth-ranked duo in the nation, earned a 6-3 win over No. 64 Lexi Borr and Jackie Urbinati.

Sophomore Silvia Fuentes and senior Clementina Riobueno clinched the doubles point for Miami with a 6-2 defeat of Asiya Dair and Wan-Yi Sweeting. Sophomore Sinead Lohan and freshman Ana Madcur were one game away from victory, up 5-4, against Emily Safron and Katya Vasilyev when play was halted.

After seizing the early lead, the Hurricanes did not let up in singles play, turning in an absolutely dominant performance. Miami did not drop a single set and lost a total of just 18 games over the six matches.

Fuentes picked up the first singles victory for Miami, logging an impressive 6-0, 6-1 win versus Safron. Freshman Clara Tanielian then made it 3-0 in favor of the Hurricanes with the third 6-0, 6-0 victory by a Hurricane all spring, as she took down Jennifer Ren without falling in even one game.

“I just think all of them—not just Clara and Silvia—have just done a good job paying attention to detail,” Yaroshuk-Tews said. “I was back there with Clara. She was so thorough the entire match. She didn’t make many unforced errors and [although I was not back there], I’m guessing Silvia was the same with her score, just very detailed tennis.”

Wagner, ranked fifth in the nation, gave Miami its fourth point, officially putting the match in the win column for the Hurricanes. She topped No. 86 Dair, 6-2, 6-2.

No. 109 Zhang finished off the sweep for the Hurricanes, as she took down Vasilyev, 6-2, 6-1, to give the Hurricanes their seventh point of the day.

After playing six of its last seven matches at home, the Hurricanes will now open April with three-straight road contests, beginning Saturday at 12 p.m. at No. 25 Clemson.