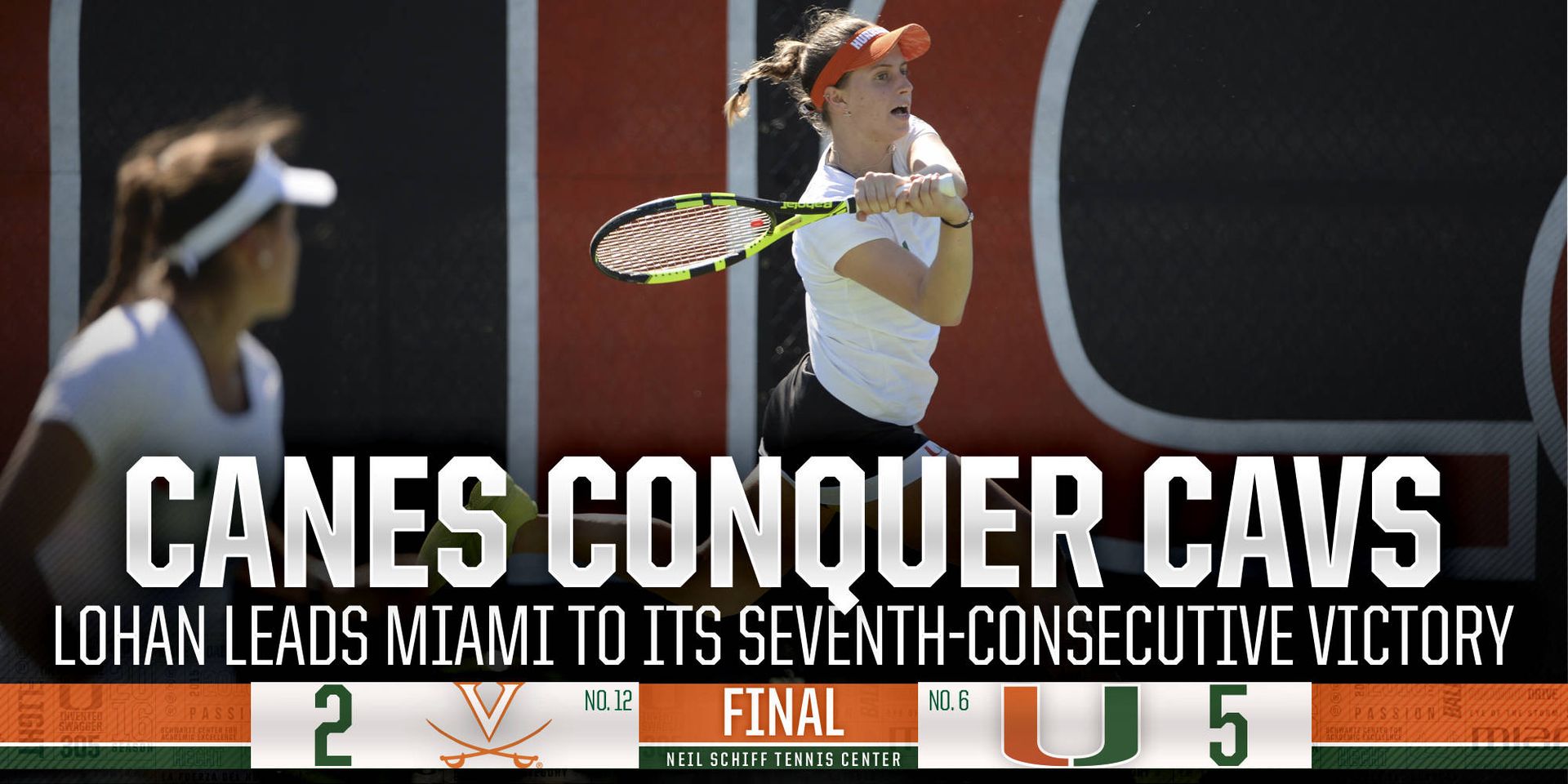 CORAL GABLES, Fla. – The University of Miami women’s tennis team extended its winning streak to seven in a row with a 5-2 victory over No. 12 Virginia Friday at the Neil Schiff Tennis Center.

“Virginia is obviously a really good team,” Miami head coach Paige Yaroshuk-Tews said. “ . . . We’ve been playing really well. So, what I’ve been talking to [the team] about was how they were going to respond when they came out and didn’t play a great tennis match. That happened at a couple positions today where the tennis wasn’t exceptional, but emotionally they were exceptional.”

Sophomore Sinead Lohan and freshman Ana Madcur, playing together for the first time since Feb. 5, set the tone immediately for Miami, posting a 6-1 win over Julia Elbaba and Cassie Mercer.

The ninth-ranked pair of senior Stephanie Wagner and sophomore Wendy Zhang then clinched the doubles point for the Hurricanes by topping No. 21 Danielle Collins and Meghan Kelley, 6-2. The victory was their sixth over a top-30 pair this spring.

Sixth-ranked Lohan locked up the victory for Miami with an impressive 6-4, 7-6 (7-5) win against No. 16 Elbaba. The win moved the Waterford, Ireland, native to 14-1 this spring, including 8-1 against ranked opponents. Elbaba is the highest ranked of the six top-40 players Lohan has knocked off in 2016 and she also beat the Cavalier senior in the fall when Elbaba was ranked third nationally.

“I think for Sinead to take out Elbaba the way she did and just make it as physical as she did is what we needed to do,” Yaroshuk-Tews said.

In a top-five showdown, fourth-ranked Collins earned a close 7-6 (9-7), 6-3 win over fifth-ranked Wagner to get Virginia (10-7, 5-3 ACC) on the board. The defeat snapped a five-match winning streak versus top-15 opponents for Wagner.

Following a weather delay of nearly two hours, Kelley closed out her match against Madcur, 7-5, 6-3, to earn the Cavaliers’ second and final point of the day. Freshman Clara Tanielian picked up a 6-1, 6-3 win over Susi to conclude action nearly six hours after it began.

“These girls have started to take a certain sense of ownership in the program, especially the younger kids,” Yaroshuk-Tews said. “They’ve bled, they’ve sweat, they’ve cried, they’ve killed it on the tennis court and they’re seeing how far that’s gotten them and now I’m sensing that they’re kind of holding onto it a little bit tighter.”

The Hurricanes will be back on the court Sunday at 11 a.m. when they host No. 53 Boston College in Coral Gables.

To learn more about the University of Miami women’s program, follow @CanesWTennis.