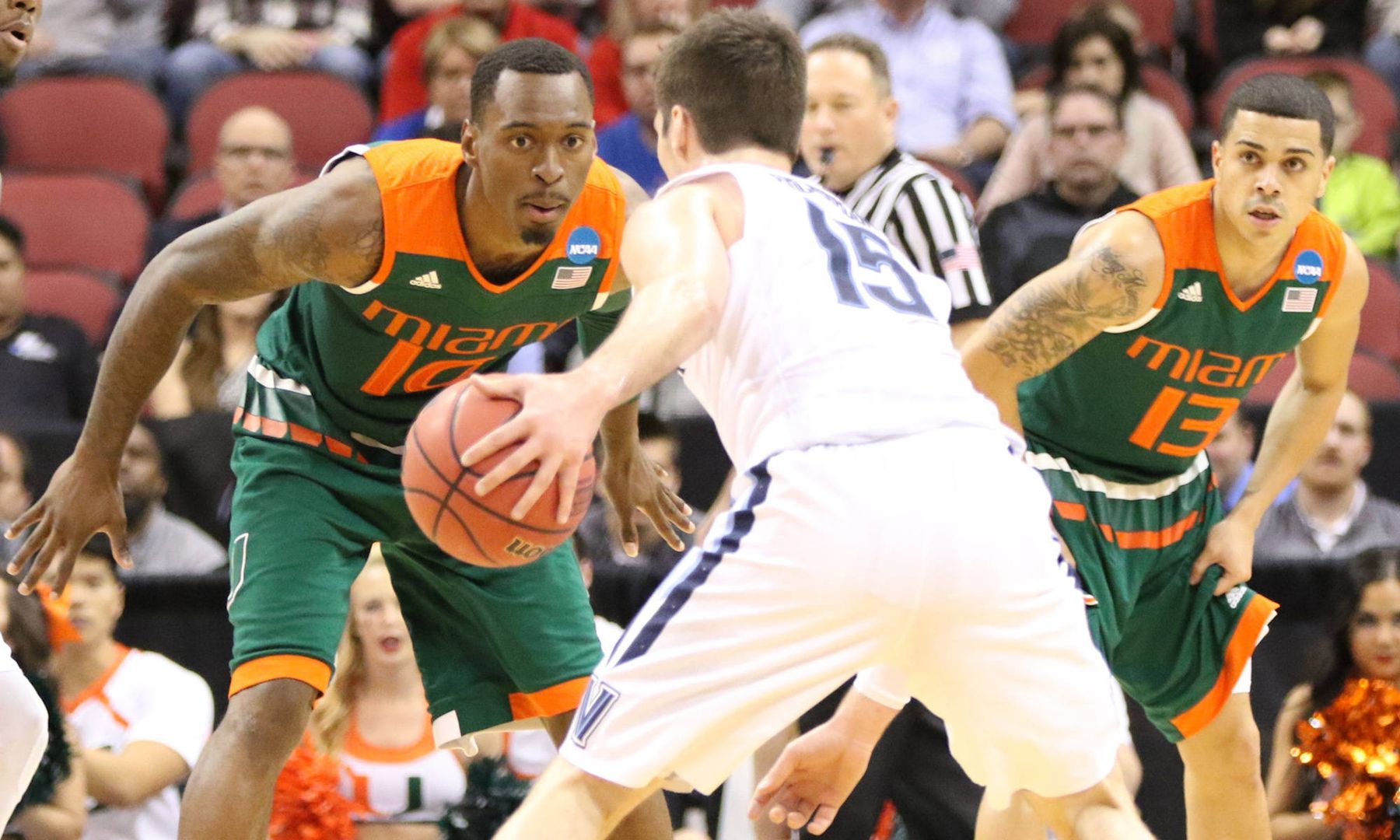 @CanesHoops Falls to Villanova in Sweet 16

LOUISVILLE, Ky. — Sheldon McClellan scored a game-high 26 points but Miami’s season came to an end Thursday, falling to Villanova, 92-69, in the South Region semifinal of the NCAA Tournament.

Villanova will play either top-seeded Kansas or No. 5 seed Maryland on Saturday in the regional final. Daniel Ochefu added 17 points, and Josh Hart had 14 for Villanova, which shot 62.7 percent (32 of 51).

Angel Rodriguez added 13 points for the Hurricanes with eight assists.

Miami got here by beating a pair of double-digit seeds, Buffalo and Wichita State. Villanova showed why the Wildcats were ranked No. 1 in the nation for the first time in program history earlier this season. It was the first game between the teams in the NCAA Tournament, and the first overall since March 2004, when both teams were in the Big East.

They turned in a dizzying first half with both teams shooting 64 percent — or better — from the floor and were even sharper beyond the arc where they combined to hit 13 of 19.

Villanova led 43-37 at halftime with Kris Jenkins coming through with the highlight shot of the game, knocking down a 3 with his left foot on the edge of the logo covering midcourt that drew comparisons online to reigning NBA MVP Stephen Curry.

But Villanova took control from the start by scoring the first eight points. The Wildcats also forced Miami into a bunch of turnovers early and scored some easy points off those mistakes. Villanova took its biggest lead at 29-14 on a 3-pointer by Jenkins with 8:35 left.

When Miami put together a 16-2 run that pulled the Canes within 31-30 on Rodriguez’s layup with 4:33 to go, Jenkins simply hit another 3. Miami never got that close again, and Villanova just padded its lead over the final minutes with each dunk or 3 giving Wildcats’ fans yet another reason to cheer.

Villanova: The Wildcats put on a shooting clinic all over the floor. They hit their first 15 free throws before finishing 18 of 19 at the line. They hit 10 of 15 beyond the arc as well. … The Wildcats outrebounded Miami 27-17 and had an 18-9 scoring edge off turnovers.

-Both teams also made all their free throws in the first half: Miami 2-of-2 and Villanova 5-of-5.

-Miami and Villanova both recorded eight rebounds in the first half, tying the second-fewest recorded and fifth-fewest conceded by Miami in a half in the ACC era (since 2004-05). The 16 combined rebounds at least tie for the fewest in a half in a game since the Hurricanes joined the ACC.

-The Hurricanes connected on six of their first seven attempts from 3-point range over the first 13 minutes and 32 seconds of the game.

-Miami had a 10-2 edge in bench points in the opening half.

-After recording 10 bench points in the first round win over Buffalo and two in the second round win against Wichita State, Miami had 14 bench points against Villanova, more than the prior two games combined.

-Miami moved to 8-8 all-time in the NCAA Tournament.

-The Hurricanes have won at least one game in each of their past three appearances in the NCAA Tournament. Miami has won at least two games in two-straight NCAA tournament appearances.

-The Hurricanes trailed 43-37 at halftime, moving to 5-7 this season when behind at the break.

-Larrañaga is now 9-6 all-time in the NCAA Tournament. He also owns a 4-2 record since arriving at Miami.

-Larrañaga made his seventh-career appearance in the NCAA Tournament and his second since arriving at Miami.

-Angel Rodriguez hit a 3-pointer in 13-straight games to close the season and had three-plus assists in 15 of the last 16 games.

-Rodriguez recorded five-plus assists for the 16th time this season, tallying at least seven for the sixth time.

-Sheldon McClellan has scored 10-plus points in 23-straight games, dating back to Miami’s ACC opener against Syracuse (1/2/16). He has scored at least 10 points in 32 of Miami’s 35 games this season.