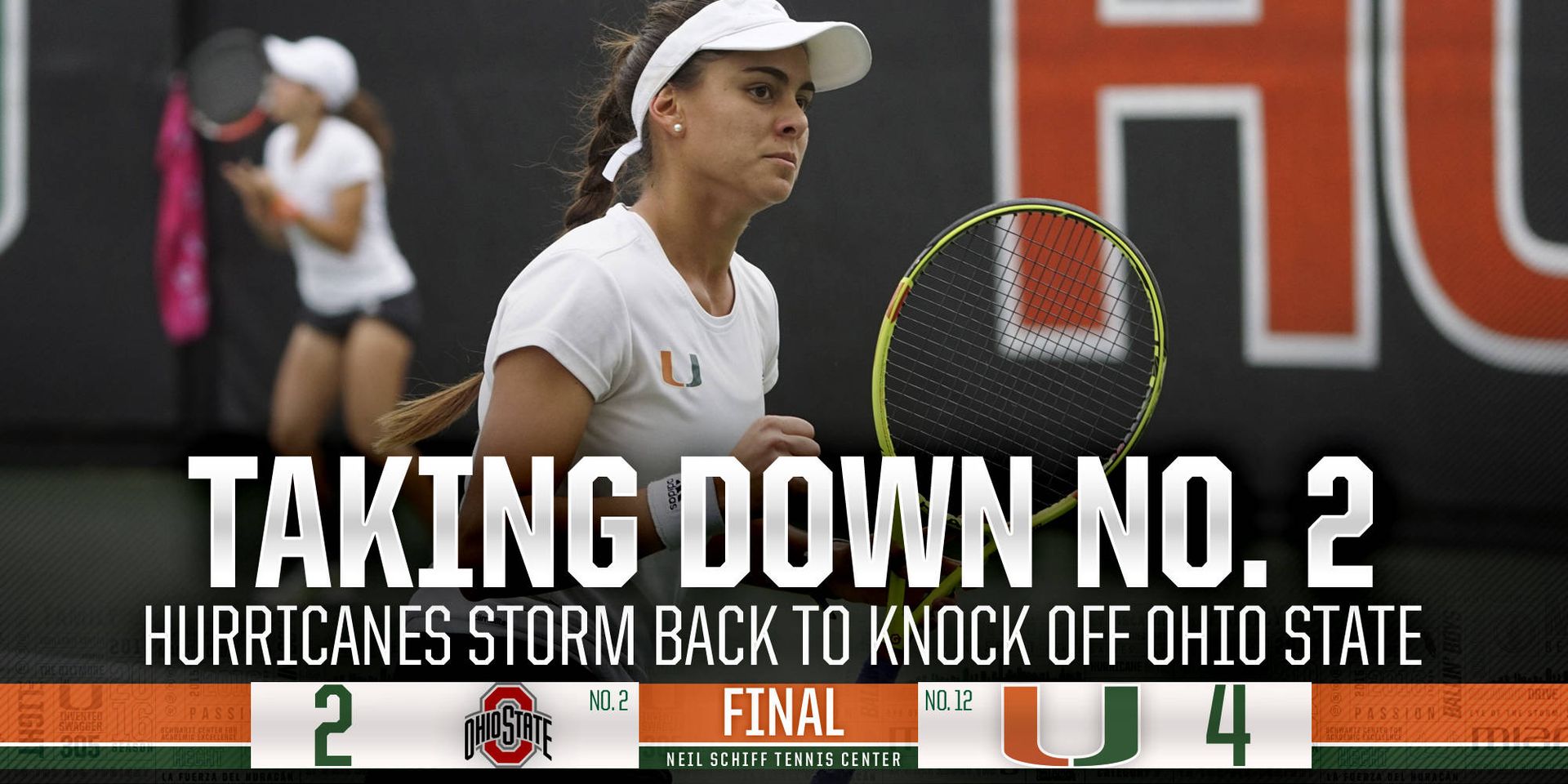 CORAL GABLES, Fla. – In a thrilling day at the Neil Schiff Tennis Center, the University of Miami women’s tennis team picked up a tremendous 4-2 victory over second-ranked Ohio State.

No. 12 Miami (8-4, 3-2 ACC) dropped the doubles point, but impressed in singles, winning four of five completed matches, to take down the Buckeyes Wednesday afternoon.

“They were all in and I am just so happy for them,” Miami head coach Paige Yaroshuk-Tews said. “They had to work so hard to get that. They deserve it.”

Ohio State (15-2, 1-0 B1G) got on the board first with the doubles point. Francesca Di Lorenzo and Olivia Sneed picked up a 6-2 win over Miami’s No. 55-ranked duo of sophomore Sinead Lohan and freshman Clara Tanielian.

Within a minute, second-ranked Miho Kowase and Anna Sanford clinched the point for the Buckeyes with a 6-3 victory in their top-10 matchup against senior Stephanie Wagner and sophomore Wendy Zhang, who are ranked No. 10.

In singles, seventh-ranked Lohan quickly tied the match for the Hurricanes, turning in a dominant 6-3, 6-1 victory against Sanford.

Freshman Ana Madcur then pulled Miami even once again, picking up the second ranked win of her career and the first not against a fellow Hurricane. The San Juan, Argentina, native came away with a 6-3, 3-6, 6-1 victory against No. 113 Sneed.

Seventh-ranked Wagner dropped the first set against Di Lorenzo, ranked third in the country, but found her form for the rest of her match. Wagner avenged her fall defeat against Di Lorenzo in the semifinals of the USTA/ITA National Indoor Intercollegiate Championships, winning 3-6, 6-2, 6-4 to put Miami ahead, 3-2. The victory was Wagner’s fifth in a row against a top-15 opponent.

“Steffi was just relentless. She decided to just hold her ground, stay up on the baseline and just crush balls,” Yaroshuk-Tews said. “That’s exactly what we talk to Steffi about doing all the time and that’s what she was able to do today.”

With two matches remaining and the Hurricanes needing one to win, it was Fuentes who clinched the victory for Miami. The native of Ciudad Rodrigo, Spain, finished off a three-set, comeback win against De Santis, 5-7, 6-2, 6-2, sending teammates, coaches and fans into a frenzy.

Tanielian’s match was left unfinished with the score 7-5, 3-6, 5-2 in favor of Ferny Angeles Paz.

The Hurricanes will be back on the court Friday at 11 a.m. when they play host to conference foe No. 32 Virginia Tech.