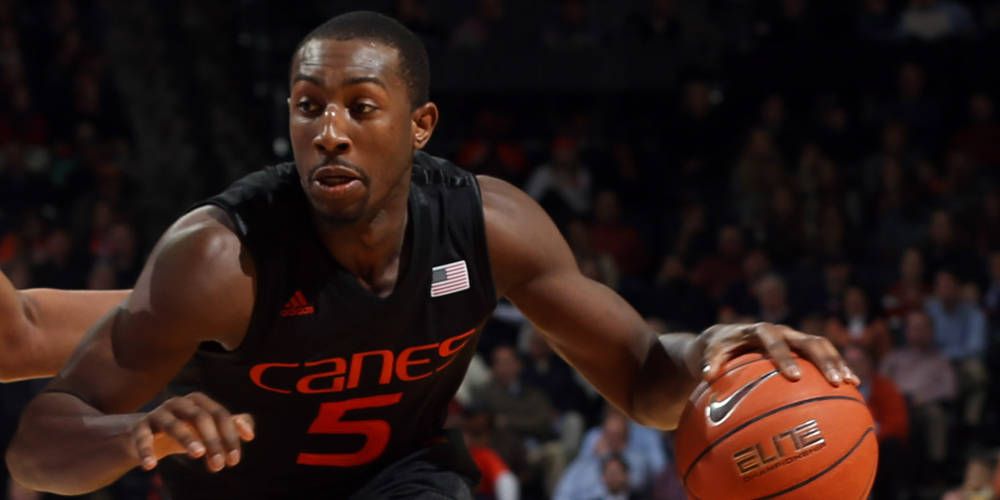 Miami (24-6, 13-5), which had won three straight and eight of its past nine, could have assured itself a share of the ACC’s regular-season crown with a win.

The Hokies led by 13 early in the second half before Miami used a 10-2 run to cut the lead to 39-33 on a 3-pointer by Angel Rodriguez with 14:29 remaining. But the Hokies answered with a 10-2 run, getting back-to-back 3-pointers from Seth Allen and Zach LeDay to start the run.

Sheldon McClellan added 17 points for Miami while Kamari Murphy chipped in with nine points and six rebounds. The last contest McClellan did not reach double figures was Dec. 29th against Princeton.

The Canes will be no lower than the No. 3 seed in the ACC Tournament pending the results of the evening’s contests.

Team Notes
– With the loss, Miami dropped to 18-13 in the all-time series against Virginia Tech, which dates back to the 2000-01 season. Miami also fell to 6-7 on the road at Virginia Tech in the all-time series.
– This is just the second loss for the Hurricanes in the last 10 games.
– The loss dropped Miami to 98-41 all-time as a ranked team. The Hurricanes fell to 50-21 as a ranked team since joining the ACC.
– Miami finished the regular season with 24 wins, which is tied for the most regular-season victories in school history.
– Miami trailed at the half for just the 10th time this season. The Hurricanes fell to 5-5 when trailing at the half.
– With the loss, Head Coach Jim Larrañaga now has a 585-389 overall record in his 32nd season as a head coach. He is 115-55 in his fifth season at the University of Miami, with a 54-34 mark in ACC play.
– Miami held a 33-24 rebounding advantage.
– The Hurricanes also held a 17-4 advantage in second chance points.

Individual Notes
– Junior guard Davon Reed finished in double figures for the 18th time this season. Reed also has finished in double figures in eight of the last nine games.
– Reed finished with 19 points.
– Reed has scored in double digits in 13 of the Hurricanes’ 18 ACC outings.
– Reed’s 19 points also tied a game high.
– With 17 points against Virginia Tech, senior guard Sheldon McClellan scored in double-digits for the 18th straight game and for the 27th time this season. The last contest McClellan did not reach double figures was Dec. 29th against Princeton.
– Sophomore guard James Palmer tied a season high with three assists. He also matched a season high with 26 minutes.
– Redshirt junior forward Kamari Murphy and senior center Tonye Jekiri each finished with six rebounds.
-Murphy has grabbed five-or-more rebounds in 13 ACC games.

“There the sixth-ranked team in the country for a reason. They won the league for a reason. Extremely experienced. I think Coach K said they’re the best team in the league as far as they’re talent. I don’t have the equity to judge anybody else’s team but they’re distinctly more talented than we are. I think that when you’re playing any team, particularly a team as good as they are, they’re going to go on a run. I think, again, it’s really as if a team is going to go on a run as much as how are you going to respond to the run. I thought our response was really good.”

“Playing at a very high level. We want to play with as many point guards on the floor as we can. If foul trouble allows us, I think how we’ve tried to distribute the minutes is let Devin, Seth Allen, 5 (Justin Robinson) play together. Devin, you can initiate offense this time when we’re running this, Seth you initiate it when we’re running this, 5 you initiate it when we’re running that. I think everybody continues to grow, continues you mature. I think they’re much more aware and comfortable with what we’re trying to accomplish on both ends of the floor. I think our staff has continued to grow and mature relative to how much to give ‘em, their ability to comprehend it, their ability to execute it. 5 is fun to coach, 5 is really fun to watch if you’re a fan. I have to be careful that I don’t become a fan of him because he’s got little man syndrome, like a lot of guys his size, but I don’t know that you can quantify the competitiveness coupled with the IQ that he plays with. He makes the right decision at a very high rate and he has a skill set to back that up. It’s his IQ that is coming to life more and more.”

“We were picked 14th, what do you think? If you’re picked 14th and you finish sixth, what other mentality should we take? Without sounding like a jerk, if you could Google my story or anything I’ve been involved with, I’ll always be able to answer that question the same way.”

“I thought in the first half, even though it was a rock fight, we were ahead at halftime and I thought some of the things that we were trying to do defensively were good. We turned the ball over five times in the second half in the first five minutes. No matter what you’re trying to accomplish defensively, teams as talented as they are, if they’re playing in a broken floor they’re going to score. So, I thought we did a better job today of our offense helping our defense. Very rarely did we take a surprise shot. Seth probably gets on per half, which restricts the other guys from being able to take a bad shot. I think that we didn’t play in a broken floor as often and I think, when they went on that run, it was because they were scoring in a broken floor.”

“The first thing I would say is I’ve learned a lot from the kids. The other thing I’ve learned by watching the kids is to be a better parent. If those kids turned out that way, obviously their parents were doing a really good job. I think not only have I become a better coach by learning from them but I’ve become a better parent by coaching them. So that’s been fulfilling. What has been as good as I’ve ever seen, particularly as a head coach, is the spirit and love that they have for one another and how they play for one another. That’s rarified air that you find in the millennial generation, that you can get everybody in one room pulling in the same direction. Again, that speaks to the character of the kids, that speaks to the character of the managers, the character of the coaches, that everybody in there, regardless of their title, are pulling, how can we get a little bit better, how can we get a little bit better. That’s really hard, may not happen again in my career. To be able to get the recipe exactly the way that it is. It’s been very fulfilling and it’s been a lot of fun. I’m very humbled and thankful for it all.”

“Their talent speaks for itself on both ends. We had to play zone because we can’t guard the pass. I think when we have a low turnover rate, I think we’re undefeated when we turn it over 10 or less times. Obviously our free throw rate has a lot to do with that. If we turn it over, not only are we preventing a field goal attempt but as the game transpires we are probably also preventing a free throw attempt. Number one, I would say we had a low turnover rate. It was 16 percent today and our OAR was 1.32 in the second half and 1.15 for the game so obviously those are really good numbers. It also helps when we shoot 82 percent from the free throw line. Again, I though our staff did a great job with the scouting report, they should be commended for it, and I also think that our players did an excellent job of executing and playing to the scouting report relative to what we were trying to accomplish offensively and defensively.”

“I just think Virginia Tech came out very ready to play, played a terrific game from start to finish. They defended us really well in the first half and, I think, we were a little too focused on what was at stake. We wanted it so badly, to win and to solidify that we would get at least a share of the conference regular season championship. I told the team afterwards, it’s not about focusing on the result, it’s focusing on the process. The process is playing good defense, rebounding, executing the offensive game plan. We just didn’t do that.”

“We were just very anxious. We weren’t cool, calm and collected like we were Wednesday night against Notre Dame. Sometimes you want something so badly you tighten up and you miss shots you would normally make. But the message before the game was that we weren’t going to settle for threes against the zone. The first possession we took three threes. Obviously, we weren’t prepared to just take our time and work the ball inside.”

“I would say both [frustrates and motivates us]. It’s certainly frustrating to lose a game like this the way that we lost it. It would be one thing if we played really well and Virginia Tech made a big play at the end but they lead by double figures the whole second half. We were not really in the game like we’ve been when we’ve won. I think we’ve finished the conference 13-5 so we’ve had a great regular season, they have to remember that. But to play well, you have to be focused on the task at hand. We weren’t. We were thinking way too far down the road.”