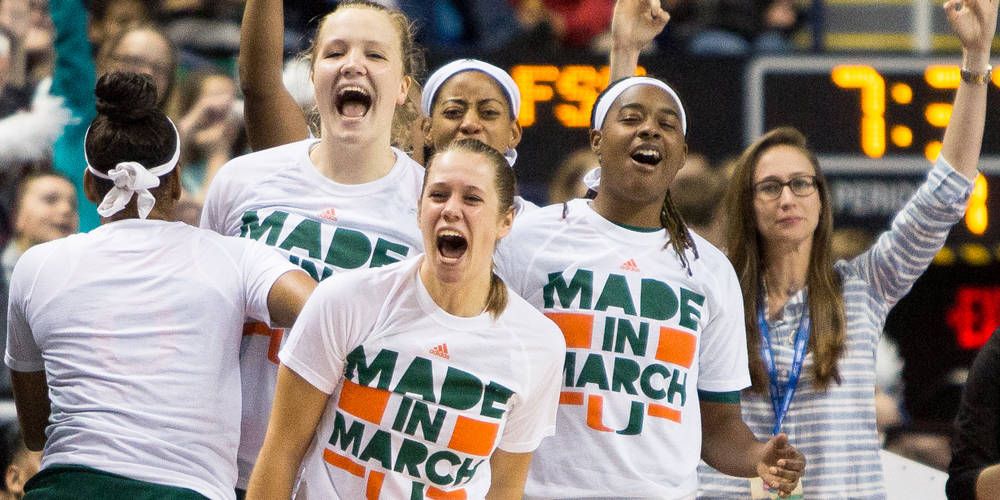 GREENSBORO, N.C. – Led by a season-high 21 points by junior guard Jessica Thomas, the University of Miami women’s basketball team earned its second berth in the ACC Tournament semifinals with an impressive 74-56 win over No. 14/10 Florida State Friday.

“We did the old Yoda line there, ‘there is no try, just do,’” Miami head coach Katie Meier said of beating the Seminoles in the third matchup with them this season. “Coming close wasn’t going to be good enough. I said, ‘don’t you dare have the mentality where after the game, you get a hug from your family, saying nice try, baby.’ We’re not ‘nice try, baby,’ anymore. It’s time.”

The Seminoles scored the first eight points of the next period to go up by nine, but Miami immediately answered. The Hurricanes scored 10-consecutive points in under two minutes to regain the lead, 26-25, with five minutes and 47 seconds left before halftime.

Seesaw action the rest of the way led to an even score at the break. Florida State senior guard Emiah Bingley, who had a game-high 11 points in the first half, hit a jumper to beat the buzzer and make it 37-37 through 20 minutes. Redshirt junior forward Keyona Hayes led Miami with nine points at the intermission.

Miami scored 11 of the first 13 points to open the second half, racing out to a 48-39 lead with 5:02 on the third quarter clock. The Seminoles scored just two points, and did not make a field goal, in the first six minutes and 50 seconds of the period.

Junior guard Adrienne Motley made a pair of free throws with 2.5 seconds left in the third session to give Miami a 52-45 edge entering the final period.

The Hurricanes pushed their lead to 15, 65-50, on the second of Thomas’ three fourth quarter 3-pointers with four minutes and 34 seconds to play. Miami continued to dominate the last stanza, extending, on two occasions, its edge to as many as 18 points, which would be its margin of victory. The Hurricanes made six of their final eight shots of the game.

Not only was Thomas’ 21-point output her best of 2015-16, she also set a career high in 3-pointers made (five), tied her career high in blocked shots (two) and minutes played (38), and a set season high in field goals made (eight). The Gainesville, Fla., native, who scored a career-high 24 points in the quarterfinals of last year’s ACC Tournament against No. 2/2 Notre Dame, logged five assists, two steals and just two turnovers in the victory over the Seminoles. The four highest scoring games of Thomas’ career have all come in the ACC Tournament or NCAA Tournament.

Junior guard Leticia Romero and sophomore forward Shakayla Thomas posted 14 points each for Florida State, while Bingley ended the game with 11 after being held scoreless in the second half.

“It was always a rivalry,” Meier said of Miami and Florida State, “but now both teams are in the top 20 and it’s talked about nationally. You’ve got All-Americans on both teams and stuff like that. I’m really proud, and Sue [Semrau, the Seminoles’ head coach] is just as proud.

Miami forced Florida State into 25 turnovers and tallied seven blocked shots to the Seminoles’ one. Meier’s team also led 16-9 in steals and 34-22 in points in the paint.

The Hurricanes are now set to face No. 2/3 Notre Dame, the top seed in the event, Saturday at 12 p.m. on ESPNU in the ACC Tournament semifinals.

·         For the 17th time this season and the third-straight game, Miami’s starting lineup was Davenport, Hayes, Motley, Thomas and Woods.

·         This is the first time the Hurricanes have defeated a top-seven seed in the ACC Tournament.

·         This is the first time in three meetings this season the Seminoles outrebounded the Hurricanes. They have had the rebounding edge in 23 of their 26 games not against Miami.

·         Miami’s 18-point lead was the largest either team has had in any of three matchups between the Hurricanes and Seminoles this season.

·         The Hurricanes’ seven blocked shots were tied for their second-most of the season.

·         Hayes posted double-digit points for the 13th time this season. Nine of those outings have come against ACC teams.

·         Thomas scored in double figures for the 21st time this season. She has scored fewer than nine points on just six occasions.

·         Davenport, who surpassed 50 steals as a collegian, fouled out for the third time this season.

·         Hof scored in double figures for the 11th time in her freshman campaign, including the fifth time against an ACC opponent and the fourth time in the last six games. It is the third time this year she has scored at least 15 points.